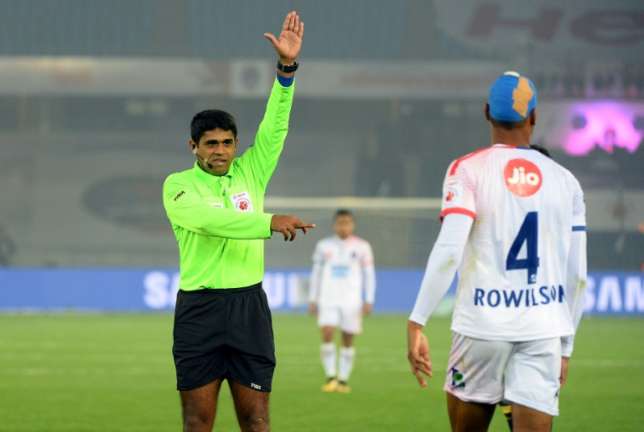 A push by the Indian Super League to develop home-grown referees has got off to an uneasy start, with a string of angry exchanges triggering sanctions against nearly half of the league’s coaches.

A push by the Indian Super League to develop home-grown referees has got off to an uneasy start, with a string of angry exchanges triggering sanctions against nearly half of the league’s coaches.

Over six weeks, four of the ISL’s 10 coaches have been punished for their treatment of referees, forcing the Indian federation to rush to the officials’ defence.

In the first three ISL seasons, 50 percent of match officials were from abroad, but Indian referees now dominate as part of a drive by the All India Football Federation to nurture domestic talent.

Foreign former stars are also much less visible under a new rule which states that each team must have at least six Indian players on the pitch at all times.

This season, referees have been at the centre of attention, with decisions on penalties, red cards and free kicks often drawing a heated response.

Former England midfielder John Gregory, in charge at Chennaiyin FC, was banned for three matches and fined $6,300 for offensive remarks over a penalty.

Mumbai City assistant coach Juliano Fontana served a four-match ban and was ordered to pay $11,000 for pushing a referee after his side’s draw against Pune City.

Pune coach Ranko Popovic, the former Serbian defender, was in turn handed a four-match ban and slapped with a $7,800 fine for calling referees “jokers” after his team’s controversy-laden win over FC Goa in December.

Delhi Dynamos coach Miguel Angel Portugal was among the first to be suspended for protesting a decision last month. He has learned his lesson. After Delhi’s home defeat by Kerala Blasters on Wednesday, the Spaniard said he had “no problems” with the match officials.

play This season in the Indian Super League referees have been at the centre of attention, with decisions on penalties, red cards and free kicks often drawing a heated response

The All India Football Federation insists it has a “zero tolerance” rule on abuse and assaults. But it is coming under pressure.

“Many referees have got an opportunity to officiate at such a big stage for the first time and they are getting better with every match,” Kar said.

India has just six men and one woman qualified to referee FIFA international matches, along with seven male assistants.

“Referees are human beings, they make mistakes but they are not intentional. Every person’s job is at stake (in ISL) and they (coaches) play the blame game,” a senior referee told AFP on condition of anonymity.

“ISL is promoting Indian referees and that is a good move. Having said that, talent should improve. We need to have qulity more than quantity.”

The focus on the ISL has increased since Asia’s football governing body ruled that the title winners will contest the AFC Cup from 2018.

The cash-rich league, backed by Asia’s richest man Mukesh Ambani, is putting the emphasis on Indian talent rather than the high-earning foreign stars who previously hogged the headlines.