Johnny Manziel Pulling For Colin Kaepernick: I Don’t Think His NFL Career’s Over 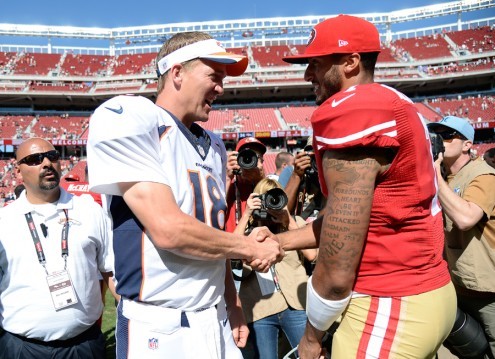 Johnny Manziel believes Colin Kaepernick﻿’s NFL career is far from over … and says he thinks the controversial free agent QB will find a new home once the noise surrounding him dies down.

Manziel — who’s currently working his own way back into the league — says Kaep’s already proven his worth in huge games … and doesn’t think his National Anthem protest in 2016 should affect his relationship with teams.

“Even if he’s not gonna start, he’s good enough to be on a roster for sure,” the ex-Browns star tells Clay Travis of Outkick the Coverage at the International Football Betting Conference in Costa Rica.

“I think once all the other stuff quiets down a little bit, he’ll be okay.”

There’s more — Travis talks with Manziel about his own NFL comeback and whether he’d consider pulling a Tim Tebow and hit the baseball diamond.