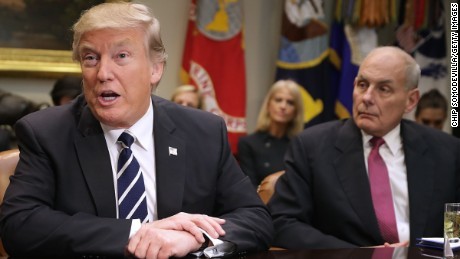 President Trump said his new chief of staff John Kelly will do a “tremendous job,” after his swearing-in on July 31. “We have a tremendous group of support, the country is optimistic and I think the general will just add to it,” Trump said. (The Washington Post)

President Trump jolted the White House yet again Friday when he announced that he was ousting embattled chief of staff Reince Priebus, instead bringing into the role Homeland Security Secretary John F. Kelly. Immediately, Washington insiders contrasted Priebus with Kelly, a retired four-star general and reported disciplinarian who “won’t suffer idiots and fools.”

Still, Kelly faces a daunting job if he wants to succeed: to restore order to a White House that has been in turmoil since almost the very beginning of Trump’s presidency. And while Kelly has a long history of enforcing order at high levels, there’s an even longer history of White House chiefs of staff who have failed at their jobs, often because of circumstances outside of their control or lessons not learned early enough.

Chris Whipple knows this. The author of “The Gatekeepers: How the White House Chiefs of Staff Define Every Presidency,” Whipple spent five years interviewing 17 former White House chiefs of staff and researching the history of the position. He found that the job is critical to a “functioning White House” and, in turn, the success of the presidency. We spoke to Whipple about the challenges Kelly will face in his new role in the Trump administration — and the one thing that needs to happen for him to be able to turn the White House around.

(This interview has been edited for length and clarity.)

First of all, can you summarize the turmoil in the White House now as it relates to the chief of staff — and did you foresee any of this as your book was nearing publication?

While the timing of the book was obviously impossible to forecast, it didn’t take a genius to figure out that Donald Trump was headed for trouble. I wrote an epilogue in December, before Trump took office. I essentially predicted that if Trump tried to run the White House the way he ran his campaign — based on seat-of-the-pants decisions without an empowered White House chief of staff — that it would be disastrous. This could not work. And that’s what we’ve seen over the last six months.

What should Kelly do first to have hope of being successful?

The first thing he has to do is make sure that there are conditions. That would be the definition of insanity if John Kelly took this job with the same authority that Reince Priebus had. What he needs to do on Day One, if not well beforehand, is insist that he is first among equals in the White House and that everybody, with the exception of family, goes through him to get to the president.

Look, it’s possible that Stephen K. Bannon can have direct access to the Oval and he can pretend to be in charge of policy. I think everybody else has to report through Kelly. He has to be in charge of executing the president’s agenda. Somebody like [new White House communications director Anthony] Scaramucci, he shouldn’t be within 100 miles of a functioning White House. He cannot report directly to Trump or it will be a complete disaster. (Note: Shortly after this interview, news broke that Scaramucci had been ousted as White House communications director just 10 days after he was named to the job.)

There are reports that Scaramucci may in fact report directly to the president. [Trump adviser Kellyanne Conway refused to say Sunday whether he would.]

This White House cannot function then. The only way you fix this White House is by giving authority to an empowered White House chief of staff. History is littered with the bleached bones of presidencies that didn’t figure this out. … It took Bill Clinton a year and a half to figure out he needed an empowered chief.

What are the other conditions Kelly needs to present to Trump?

The other condition is control of the president’s Twitter account. “You can tweet all you like but you have to run them by me first.” If that fails, be prepared to quit. “I am prepared to resign the first time you send out a tweet with demonstrable falsehoods.”

How should Kelly navigate relationships with people like Ivanka Trump and Jared Kushner, who are uniquely close with the president?

He could take a page from Jim Baker. He was able, in a very fractious White House full of infighting, to be savvy and make the right alliances. He was the hated pragmatist. But Baker prevailed because he made allies of Nancy Reagan and Mike Deaver, the deputy chief who was like family to the Reagans. [Baker] could walk into the White House, close the door and tell Reagan what he didn’t want to hear. A really strong White House chief does it. You have to be prepared to quit. You have to be prepared to resign if the president won’t abide that.

Do you think Kelly, a retired Marine general, would be someone who would quit? Given the origins of the role under Dwight D. Eisenhower, would a military background make one any more likely to be a successful chief of staff?

I can’t speak for Kelly and he hasn’t spoken to me. I’ve spoken to a few former White House chiefs who have not heard from him, interestingly, which is not a good sign. Most White House chiefs incoming would be working the phones to their predecessors and it doesn’t sound like he’s doing that.

The last time we had a general as chief of staff, it didn’t end well. Al Haig [who served as chief of staff under presidents Richard Nixon and Gerald Ford] lasted little more than a month under Ford. The history here of generals as White House chiefs is not very encouraging.

What should Trump learn from that history?

Donald Trump needs to learn what all of his predecessors found out — sometimes the hard way — which is you cannot govern effectively without empowering your chief. There’s no evidence that Donald Trump has learned that lesson or learned anything in his first six months as far as I can tell. That’s the central lesson that he has failed to grasp. Until he figures it out, this White House can’t function. One former White House chief said it’s a little bit like alcoholism. Presidents have to hit rock bottom to make such a fundamental change.

You interviewed 17 former chiefs of staff for your book, including those who served in tumultuous times. Aside from Trump, what challenges does Kelly have ahead of him that are unique to this administration?

Well, far and away the biggest challenge is Donald Trump. That’s without question. This is a guy who has shown over six months he has no idea how to govern. It’s really Kelly’s responsibility to show him the way. Almost everything in Trump’s nature, you know, it fights against that. It’s a really tough, tough assignment and you have to wonder why somebody like John Kelly would take this job in the first place, unless he knows something we don’t know. Did he make conditions and did Trump accept them?

We’re only six months into the Trump presidency. That strikes me as relatively early compared to some of the other examples you’ve given. Can you think of chaotic past White Houses that still managed to turn things around?

At the height of the Iran-contra scandal, Reagan was in trouble. There was a serious possibility of impeachment. Reagan brought in Howard Baker Jr., and his deputy, Ken Duberstein. The first thing they did was they sat down and made a pact between them — Baker and Duberstein. They decided they were going to sit Reagan down, figure out what he knew about Iran-contra and, if he was lying to them, they would resign.

I think that Kelly needs to take a page from them. He needs to sit Trump down and say, “Look, here’s the red line. If you cross it, I will resign.” One of those red lines would be tweeting demonstrable lies. There are others. That would be the first one. I would want control of that Twitter account.

Do White House leaks matter to the chief of staff? If so, to what extent could Kelly shut down leaks coming out of the White House?

Were there specific instances where Reince Priebus failed or should have carried out his role in a different way?

Much has been made of the differences between Priebus and Kelly. Do you think Trump would be more likely to listen to Kelly?

I can’t read his mind and so we’re just going to have to see. It’s just hard to see.

In John Kelly, Trump gets a plain-spoken disciplinarian as his chief of staff

Trump swears in Kelly as new chief of staff, promising a ‘spectacular job’

By the time Trump tweeted, Priebus’s ouster was old news on the Trump Internet