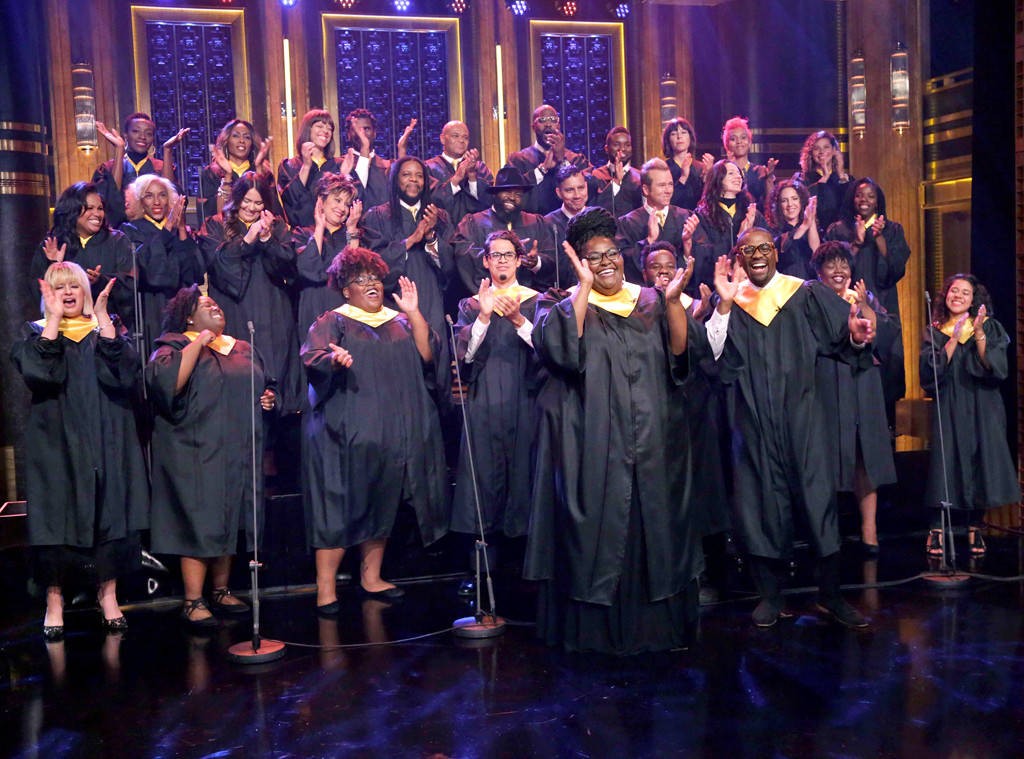 In times of great hardship, we need great acts of charity…

On Tuesday night’s episode of The Tonight Show, host Jimmy Fallon announced the show will be donating $1 million the Hurricane Harvey relief fund set up by Houston Texans star JJ Watts. The fund has amassed over $20 million so far.

The normally funny host took a somber moment to acknowledge the tragedy that struck southern Texas last week, but also made sure to point out some remarkable acts of heroism that took place despite the tremendous circumstances. 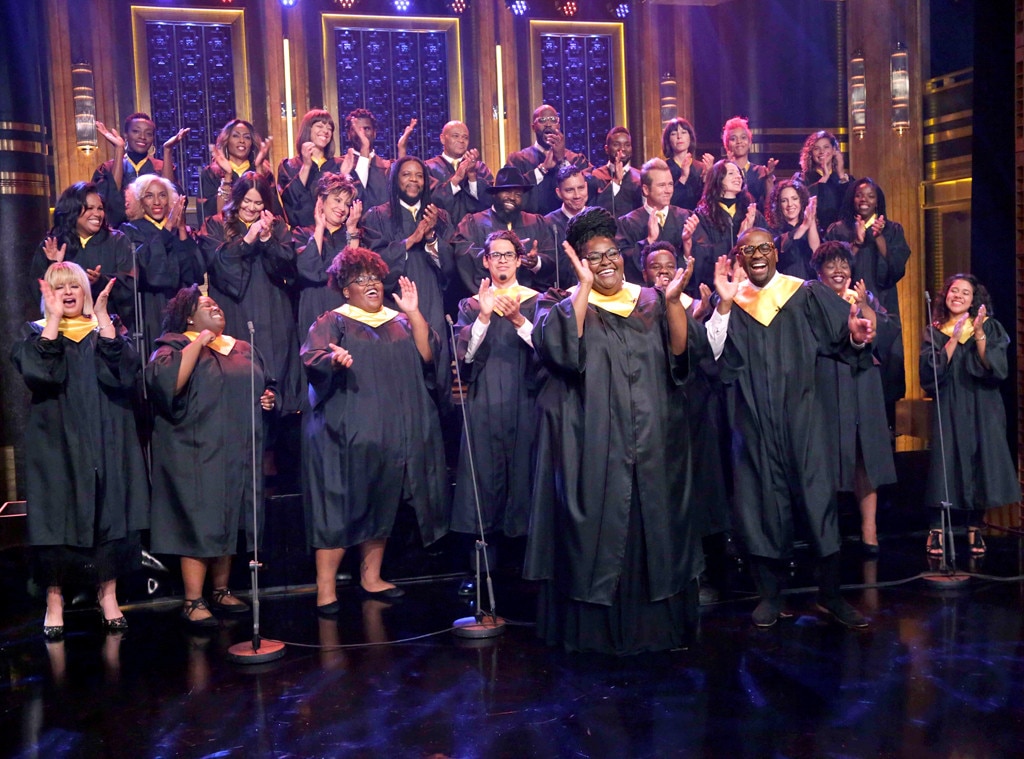 Speaking to the camera, Jimmy said, “Last week we saw the devastating effects of Hurricane Harvey on the state of Texas. But in the face of this tragedy, we saw good.”

“We saw communities banding together. Neighbors helping neighbors. Strangers helping strangers. So many heroes—people like Mattress Mack, who opened up his stores and showrooms for those who needed shelter… The group of people who formed a human chain to save a man from a flooded SUV… And J.J. Watt from the Houston Texans, who has raised over $18 million dollars to provide food, water, and supplies to the victims,” he added.

The 42-year-old New Yorker added, “I’m proud to say that our show, The Tonight Show, is donating $1 million dollars to JJ’s fund. Thank you, JJ.”

He then welcomed Victoria White, Marquist Taylor and their Houston gospel choir to sing a moving rendition of “Lean on Me.”

Jimmy and The Tonight Show, which airs at 11:35pm ET/PT on NBC, gave handsomely but they aren’t the only celebs who have opened up their hearts and their wallets to help the relief efforts.

See which other stars have donated…

The superstar singer announced she would be donating $1 million to the Red Cross to aid in Hurricane Harvey relief.

E! News confirmed that the inaugural donation made to the United Way Harvey Recovery Fund was from the Leonardo DiCaprio Foundation, which made a $1 million contribution.

“We are incredibly grateful for the generosity of Leonardo DiCaprio and his foundation,” United Way Worldwide President and CEO Brian Gallagher said in a statement. “Responding to Hurricane Harvey requires the best of all of us–and that’s what this gift represents.”

Instead of giving gifts, the singer used her 35th birthday to ask friends to donate to YouCaring fundraiser that will go to rebuilding the La Vita Bella nursing home in Texas that was destroyed by Hurricane Harvey.

The Supernatural cast thanks fans for giving to a crowdrise fund and asked people to give via his Instagram account.

Sharing a joint Instgram video, the couple donated $50K as a couple to help out Houston and the surrounding areas. “We have to pull together,” said the singer.

The singer announced, “I will be doing a special ‘Orions Rise’ show in Boston, and ALL proceeds will go towards Hurricane Harvey Relief. I’m committed to partnering with organizations on the ground in Houston and making contributions to uplift the city that raised me with so much love. See you September 28th Boston, I thank you in advance for making this a special meaningful night!”

The “Sorry Not Sorry” singer said on Twitter she would be giving $50K.

The Canadian singer announced on Instagram he would be donating $200K to help rebuild Houston.

The singer didn’t disclose how much she gave but she did release a statement to the Houston Chronicle, saying, “My heart goes out to my hometown, Houston, and I remain in constant prayer for those affected and for the rescuers who have been so brave and determined to do so much to help.”

Her BeyGood Foundation has teamed up with Bread of Life and Greater Houston Community Foundation to help with relief efforts.

The singer helped rescue over 200 dogs and cats from Hurricane Harvey.

On Sept. 12, the funnyman will come together with Reese Witherspoon, Blake Shelton and more for a telethon benefitting Hurricane Harvey victims.

The actress shared an image of her $25 donation with the caption, “Very easy thing I just did. You can too, if you’re so inclined. Text HARVEY to 90999 to donate 10 dollars to the @americanredcross for hurricane relief AND/OR text HURRICANE to 20222 to donate 25 dollars to @savethechildren. My thoughts and prayers are with everyone in the path of Hurricane Harvey.”

The singer donated $100,000 to relief efforts and launched his own crowdfunding initiative, which has raised over $369K so far.

Houston Texans’ defensive end took to Twitter to create a fundraiser for recovery efforts, which raised over $600K in less than 24 hours. The NFL star posted a minute-long video of himself asking for help, along with the caption, “Recovery efforts from Hurricane Harvey will be massive. We must come together to help rebuild our communities.”

Watt’s fund has raised over $18 million.

The funnyman started a huge donation flurry from famous folk and random people who wanted to help by starting the Hurricane Harvey Relief Challenge.  Hart’s CrowdRise page received upwards of $1.3 million from over 8,000 people.

The actor recently announced in a Facebook video that he would be donating $1 million to the tragedy.

“As someone who is from New Orleans and was involved in helping those affected by Katrina, he knows all too well how this affects everyday lives and he wanted to do something to give back,” a source shared with E! News.

The Oscar winner donated a $1 million sum to the Red Cross for Hurricane Harvey relief.

The reality star and her family donated $500K to Hurricane Harvey relief.

“Taylor Swift has generously made a very sizable donation to Houston Food Bank in honor of her mother who graduated from the University of Houston,” the group said in a message posted on Facebook. “We thank you, Taylor, and we thank everyone for donating to help rebuild our community. #houstonstrong.”