Jailed Philippine Senator: ‘I Won’t Be Silenced Or Cowed’ 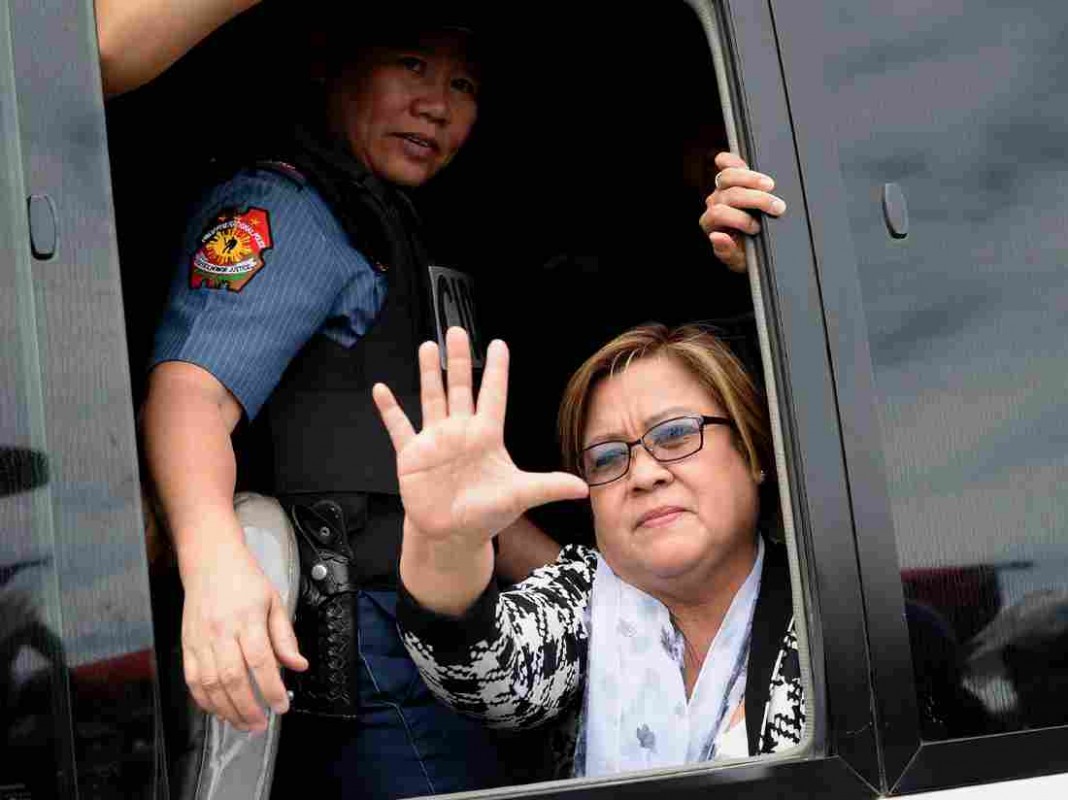 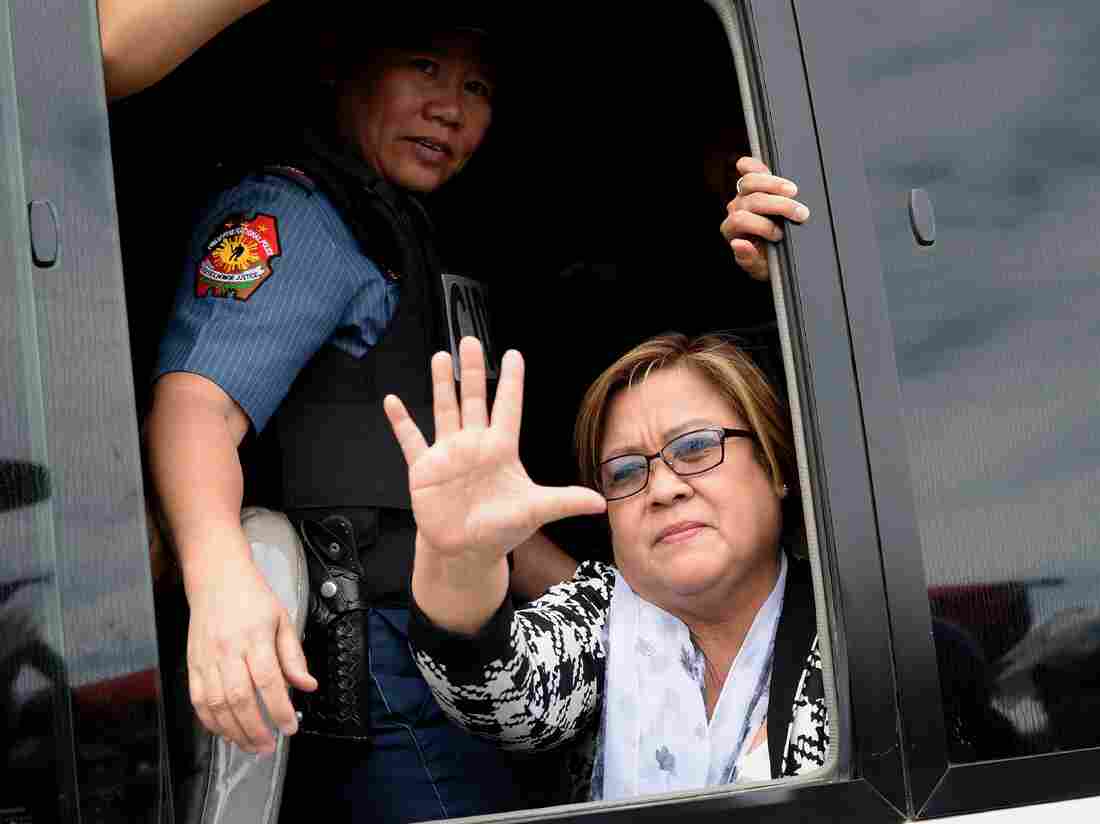 Philippine Sen. Leila de Lima, a former human rights commissioner and one of President Rodrigo Duterte’s most vocal opponents, waves to supporters after appearing at a court in suburban Manila on Feb. 24. She was arrested on drug-related charges that she denies. Noel Celis/AFP/Getty Images hide caption

Philippine Sen. Leila de Lima, a former human rights commissioner and one of President Rodrigo Duterte’s most vocal opponents, waves to supporters after appearing at a court in suburban Manila on Feb. 24. She was arrested on drug-related charges that she denies.

She has no phone, no laptop, no Internet and no air conditioning inside her cell. It’s 93 degrees outside, but Leila de Lima looks remarkably composed.

The Philippine senator spends much of her time reading and attending to Senate business as best she can, though she isn’t allowed to vote. De Lima, a 57-year-old grandmother, was imprisoned in February on President Rodrigo Duterte’s orders, after poking the bear one too many times. The charges against her, which she denies, include taking money from jailed drug dealers.

The final straw for the mercurial and combative Duterte, de Lima believes, was her Senate investigation into the president’s bloody war on drugs, which has left more than 7,000 dead since last summer in encounters with police and in so-called vigilante killings.

“I knew he was going to be pissed off and come after me,” de Lima says. “He’s very, very vindictive.” But, she says, “I didn’t imagine it would be this severe.”

It’s not the first time de Lima and Duterte have tangled. In fact, de Lima says, her incarceration is part of a “personal vendetta” by the president that started after she began an investigation of him in 2009, when she headed the Philippines Commission on Human Rights and he was mayor of Davao City.

De Lima was exploring Duterte’s alleged links to the so-called Davao Death Squad that operated during his two decades as mayor. The group used tactics similar to those employed by police and vigilantes in Duterte’s current bloody war on drugs. De Lima’s investigation centered on more than 100 extrajudicial killings in Davao City, allegedly carried out by the death squad.

“He will never forget what I did investigating the Davao Death Squad,” de Lima says. “It’s very, very personal.”

After Duterte’s election as president, and de Lima’s as senator, many — including Duterte himself — believed some sort of confrontation was inevitable. “Do not pick a fight with me,” Duterte warned her in May 2016. “You will lose.”

But as head of the Senate Committee on Justice and Human Rights, de Lima launched an investigation into Duterte’s war on drugs on July 13, 2016.

“By that time, the killings had already started,” she says. “By the second week in July, the body count was already approaching 1,000.”

“De Lima, you are finished,” he declared at a news conference in Davao City a few weeks later.

He then embarked on a public campaign of shaming de Lima, who has admitted to having had a relationship with her former driver. Duterte accused de Lima of being an “immoral woman” who, during her time as the country’s justice secretary, was “not only screwing her driver, she was screwing the nation.”

Duterte also accused de Lima of taking bribes from drug dealers to finance her Senate campaign and suggested her best course of action might be to “hang herself.”

But de Lima held her ground.

“If this is his way of stopping the Senate’s investigation on the extrajudicial killings, he can try until he finally silences me or the Senate,” she told reporters in August. “But I think it is already clear what is being done to me is what will happen to anyone who does not bow to the wishes of the president.”

And it wasn’t just the president, says Jose Manuel Diokno, the law school dean at Manila’s De La Salle University and one of de Lima’s lawyers.

“She really got it from the president himself and from everybody else in the government and from the trolls,” he says. “And that included even a fake sex video and all of that, all designed for one thing, and that was to destroy her reputation.”

Duterte “seems to react disproportionately to women who challenge his version of reality,” she says. “And it really validated the warning signs we’d had since the campaign about human rights and about women’s rights. … They did that through the very vicious online social media campaign against her … and using aspects even of her personal life that, in a mature debate, should be off-limits.”

Even more alarming, Hontiveros says, is that “after going after Sen. Leila, the trolls turned their attentions on Vice President Leni [Robredo], using similar voice, similar tactics and infrastructure and content generation and funding for their campaign also against the vice president.”

Robredo has also been somewhat critical of the president and his methods.

As for de Lima, she remains unrepentant and unbowed in her jail cell at the Philippine National Police headquarters at Camp Crame, in metro Manila.

She isn’t allowed to leave. But de Lima does get regular visits from her son and grandson. She denies all the charges against her and says she never took money from drug dealers.

“It’s a demolition job,” she insists, “orchestrated by the president.”

Her lawyers are working to get her freed. “There is absolutely no basis for any of these allegations against her,” Diokno says. The evidence he has seen is the “word of convicted criminals … that won’t stand up in court.”

But no court date has been set, and de Lima isn’t optimistic that she will be freed anytime soon.

For now, she has her food delivered from outside — just in case.

Nevertheless, the president’s approval rating is high — between 75 percent and 80 percent, according to the latest opinion polls. This might help explain why there hasn’t been much public outcry about de Lima’s continued detention.

But the case has left many Filipinos wondering — and worried: If this can happen to a sitting senator, what about ordinary people?

The answer may be found in the thousands of dead in the war on drugs to date. Almost all of them were ordinary Filipinos living in metro Manila’s poorer neighborhoods. De Lima says that is one reason she has ended up in jail — because of her outspokenness about their deaths.

“I won’t be silenced or cowed,” she says. “These extrajudicial killings have to stop.”