It took over 3 hours, but this conservation officer helped save 7 beached whales in Embree 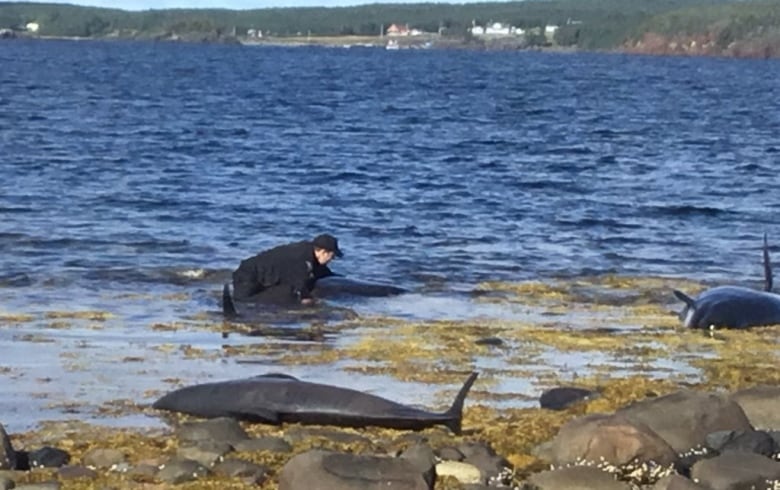 Ryan Collier told CBC Radio’s On The Go that he got the call around 9 a.m. last Wednesday morning from a town worker who described eight whales had become stranded on a beachhead during low tide the night before.

One, a young calf, was dead when Collier arrived.

“It’s not a part of our regular duties, dealing with beached whales. So I said, ‘I’m close to the area, I’m 10 minutes away, I’ll come down and make the appropriate phone calls when I get there,'” Collier said.

“You could tell they were stressed out and everything else, and I couldn’t just sit there and wait, so I just started out in the water and started pushing, pulling and rolling them over just to see what I could do.”

Collier said some of the smaller whales were about six to seven feet long. The largest was 14 feet long, he said.

‘I couldn’t give up’

The tide was already beginning to rise, slowly but surely, when Collier arrived to the scene. He said he tried to wiggle each whale as much as he could along the slippery sea kelp, as much as a millimetre at a time.

“I’m just an animal lover, and I just had to do what I could do,” he said.

“I couldn’t give up. I can’t remember how long I was there working on a few of them, but I’ll never forget when I let the first one go and give it a push out into deep water. I just stood up and watched this guy swim off in deep water and I was like, ‘That’s fantastic. That’s one, let’s see if I can do another.'”

He said it became exhausting work, but the whales, too, were exhausted as the tide rolled in, trying to keep themselves above the water to continue breathing while still lodged on the beach.

But one by one Collier was able to dislodge six whales.

By the time he reached the final, and biggest, whale of the bunch, two colleagues — Mitchell Gillingham and Ryan Knott — arrived to give him a hand. Collier had been in the water for about three hours at that point. He said he began to shake, his voice was cracking and knew mild stages of hypothermia were going to follow.

So, he went home, dried off, switched into dry fishing waders and went back to finish the job.

“Honestly, I didn’t really think any of these whales were going to get pushed off by me and a few people on the beach. It was my first time ever dealing with a beached whale,” Collier said.

“It was an amazing sight to see when we finally had them all out in the deep water.”