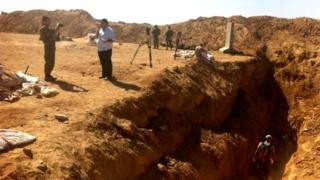 Israel is to accelerate the building of a huge barrier along its boundary with Gaza aimed at preventing militants from tunnelling under the border.

An Israeli army commander said the barrier should be completed in 2019.

Israel has sought to neutralise the threat of cross-border tunnels since its war with militants in Gaza in 2014.

Israeli troops destroyed more than 30 tunnels and have found two since the end of the war.

At a briefing on Wednesday, Israel Defense Forces (IDF) Maj Gen Eyal Zamir said the hi-tech barrier would be completed, even at the risk of renewed conflict with Hamas.

Last year, Hamas’s leader in Gaza, Ismail Haniyeh, said the group was still digging tunnels, without specifying whether these extended into Israel.

Part of the new barrier will protrude into the Mediterranean Sea, in an apparent effort to thwart attacks by frogmen.

Four such Hamas militants tried to swim out to attack an Israeli army base during the 2014 war, but were killed by the IDF.

According to local media reports, the machine used to dig the new the barrier will destroy any existing tunnels, while the barrier itself will be equipped with sophisticated technology to detect any new tunnels being built.