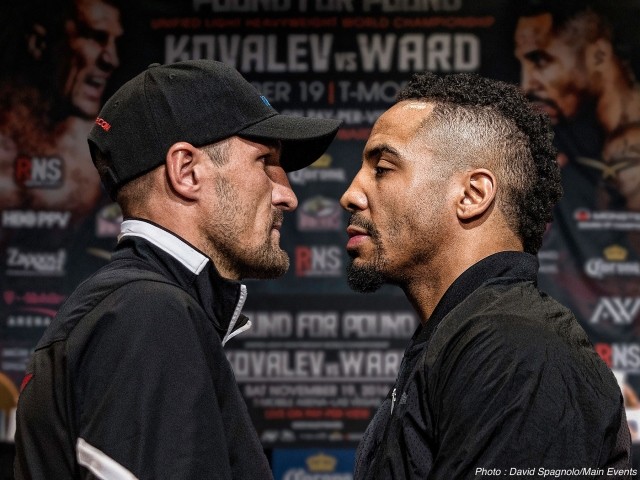 LAS VEGAS — As she sat in front of a group of reporters in a quiet conference room, attempting to make one last sales pitch for Saturday’s rematch between unified light heavyweight world titlist Andre Ward and Sergey Kovalev, Main Events CEO Kathy Duva simply sighed and shook her head as she felt the wheels coming off the train.

One question about the recently announced fight between Floyd Mayweather and Conor McGregor turned into two, which turned into three and, well, you know how that goes.

“Can we talk about this fight,” Duva hopelessly asked the assembled media. “Everybody is talking about this awful event that’s going to take place, and that’s fine, you’ll talk about it when the time comes, but I wish you wouldn’t talk about it now because what we have here is a great event.”

The questions were simply an extension of what was taking place in the media center behind her, which was set up for Ward-Kovalev II. The front page of the papers in the room trumpeted the Aug. 26 fight between Mayweather and McGregor, the televisions in the room were showing highlights of Mayweather and McGregor as talking heads debated the fight, and even the radio hosts flown in to make up radio row at Ward-Kovalev II were talking about Mayweather-McGregor.

“The question I’ve been asked most often since I’ve gotten here is, ‘Why don’t you think this fight is bigger?’ You guys write about it,” Duva said. “You have to tell people, but instead, and I get why you have to do it, I looked at Google to see what stories are out there, and it’s all about Mayweather and his circus. It’s a shame.”

Duva took the timing of the announcement of the Mayweather-McGregor fight, which will be on Showtime PPV, as a direct shot at HBO PPV, which will broadcast Ward-Kovalev II on Saturday.

“It was very pointed, not at us so much, as HBO,” Duva said. “I’ve been doing this for 39 years, and when you have that kind of perspective you realize what happens at one event or one month or one day with one announcement isn’t anything when compared to the larger scope of what’s going on. HBO was here when we started, and it’s going to be here long after we’re all gone.”

It can easily be argued, however, that Ward-Kovalev II wasn’t getting much mainstream attention before Wednesday’s announcement of Mayweather-McGregor, and now at least boxing is on the front page and leading sports highlight shows. The casual fans that will want to watch Mayweather-McGregor had likely made up their mind on whether or not they were watching Ward-Kovalev II by Wednesday.

Andre Ward and Roc Nation president Michael Yormark explain why ?Sergey Kovalev hasn’t done enough to promote their fight on Saturday after he skipped his media availability on Thursday.

Duva, however, not only believes Wednesday’s announcement will hurt Saturday’s fight but will set boxing back the same way Mayweather’s fight with Manny Pacquiao did a little over two years ago. The sport is just now enjoying an upswing after the backlash from that disappointing fight.

It may be a spectacle, but spectacles sell tickets and pay-per-views. What doesn’t sell tickets and pay-per-views is a fighter that refuses to talk to the media two days before his fight and walks off the stage during the fight’s final news conference as Kovalev did Thursday. Not only did Kovalev ignore his obligations, but Roc Nation president Michael Yormark didn’t do anyone any favors when he then proceeded to bury Kovalev to the media.

Sergey Kovalev points at Andre Ward and walks off the stage at the pre-fight press conference at the Mandalay Bay Events Center.

That’s not exactly the best way to build up your champion’s opponent and make people want to buy the pay-per-view or gobble up the hundreds of tickets still available for the fight at the 12,000-seat Mandalay Bay Events Center.

Say what you will about the spectacle of what will actually happen in the ring between Mayweather and McGregor, but you will, if nothing else, get the most entertaining news conferences and interviews leading up to the fight. Unfortunately for Duva and Yormark, the same can’t be said about the lead-up to Ward-Kovalev II.

If there is one positive about Mayweather facing McGregor for Duva, Yorkmark and others in boxing, is that it may once and for all end the debate between MMA and boxing fans about which sport is the best.

“When this is over and the fight ends up the way I think it will,” Duva said. “The next time someone asks me, ‘MMA or boxing, which one is the better sport?’ I’m just going to go, ‘Well, we know who the badasses are because Ronda Rousey and Conor McGregor just got their asses kicked by two boxers, and that’s a fact. We’ll at least have that to cling to.”