Is FG’s reason for disobedience to court orders justified? 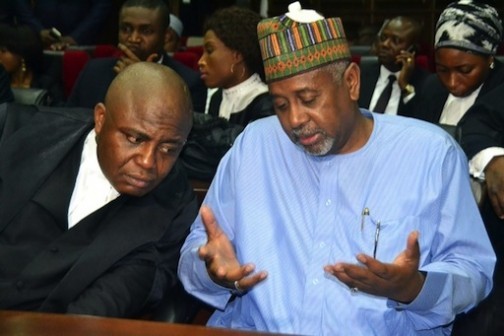 The alleged statement credited to Minister of Information, Alhaji Lai Mohammed that the refusal of the Federal Government to release Col. Sambo Dasuki (retd) and Sheikh Ibrahim El-Zakzaky and his wife, Hajia Ibraheema El-Zakzaky, is for security reasons is not enough justification for disobedience to court orders.

All I can say on this issue is that the present Federal Government is really playing with Nigerians. I want us to stand up and resist this joke seriously because anybody can fall victim. If this can be happening to Col. Dasuki, Sheikh Ibrahim El-Zakzaky, what do you think will be the fate of millions of Nigerians currently in police custody?

Although Alhaji Lai Mohammed is not the first government spokesman to give security reason as excuse, Garba Shehu once told us that the Sheikh is in protective custody and that the justification for holding the wife is to take good care of him.  Shehu also said the sheikh was being held for his own good. Is Dasuki also being held for his own good?

I will advice the Federal Government to act wisely by obeying court orders. If these suspects have committed any crime that they need to appear in court for, they should be charged to court and let their trial take its proper course.

Finally, the constitutional requirement for granting an accused bail is spelt out and the judge who is presiding over the matter also has discretionary powers. Part of the requirements for granting bail is health grounds, which the accused persons have already met before a court of competent jurisdiction. I have not seen any justification for their continuous detention on the basis of security.  If truly a person can hold this country to ransom on the basis of security, why do we have all this security apparatus?

In view of this, I call for their immediate release. Keeping them in custody in defiance to subsisting court orders will continue to stain the image of the Federal Government and the personality of our well-respected President Muhammadu Buhari. Some are already speculating that our President, being a Sunni Muslim, is doing the bidding of Saudi Arabia to eradicate Muslims who belong to the Shiites Islamic sect, with the continuous detention of El-Zakzaky. Secondly, that the continuous detention of Col.  Dasuki, who was General Ibrahim Babangida’s ADC, was meant to avenge his (Buhari’s) detention by the Babangida military regime.

It is unfortunate for the Minister of Information, Alhaji Lai Mohammed to say that the Federal Government is keeping Col. Sambo Dasuki and Ibrahim El-Zakzaky in custody despite court orders granting them bail, for security reasons.

I also view the FG’s reason for disobedience to court orders despite the bail as not justified because we are practicing democracy in Nigeria. I don’t know why the Nigerian government still has a record of disrespect for the rule of law even with the strong judiciary system that we have. This may be because we are still grappling with the realities of establishing strong democratic institutions in the face of a weak political culture.

Democracy and the rule of law are, in both theory and practice, interwoven and mutually reinforcing. The principle of rule of law is an essential element of democracy without which the process of a democratic system is likely to be endangered and bereft of its inherent value and sanctity. Put differently, without the rule of law, democracy is impracticable as arbitrariness is likely to hold sway and torpedo the process of realising good governance.

This is largely due to the overbearing character and pattern of the executive arm of government in its relationship with the other institutions. In other words, the triangular relationship between democracy, rule of law and good governance has not been deeply entrenched into the value system of the Nigerian democracy.

As a result, mutual respect, justice and fair play in political interactions among the democratic institutions, remain abysmally low, thereby rendering the credibility of democracy questionable and, in some cases, a mockery of the system itself.

The Federal Government’s reason for disobeying court orders on El-Zakzaky and Dasuki is not justified.

The Minister of Information, Alhaji Lai Mohammed, claimed that they were being held for ‘security reasons’, but the court that gave that order must have also considered this before arriving at the order for them to be released.

Any government that defies court order is breaching the rule of law. It is a wrongful act to disobey court orders. If an order has been given, either rightly or wrongfully, that order must be obeyed and later, the wrongful aspect can be thrashed out.

Moreover, we are under a democratic dispensation and not under a military government. The rule of law must be given its rightful place in a democratic setting.

The excuses given by the Federal Government on why they are still holding Dasuki and El-Zakzaky is not justified. It shows that the Federal Government does not obey the rule of law. When a court of competent jurisdiction has made a pronouncement, it is meant to be obeyed. This is because the parties subjected themselves to the jurisdiction and decision of the court and the court has made the pronouncement; they have to obey it.

If they refuse, it amounts to disobedience to court order. If they were not satisfied with the decision of the court, they should have gone to a higher court to appeal the ruling. In this case, the court had given a directive that the suspects be released on bail and they did not contend it. But coming to use security as a reason, is not justified at all. Appeal should have been their next line of action. At least, they would have waited to see how the bail conditions given by the court would be fulfilled, instead of saying that they should not be released.

The action of the Federal Government is unfounded and it will hold no water if taken before a higher court. It makes nonsense of the judiciary. If a court gives an order granting bail, it is just a temporal release from prison custody. It does not mean that the court has freed them.

The Federal Government is not obeying the rule of law. They should respect the rule of law, which court orders represent. When the court gives an order, it should be respected by all parties to the case.

There is no part of our laws that gives government the right to curtail personal liberties and rights of citizens against a valid order of court. It has no right to detain any citizen under the pretext of security without a valid court order. That is the standard practice in all civilized societies.

The statements credited to the Minister of Information, Alhaji Lai Mohammed, and the Senior Special Assistant to the President on Media and Publicity, Mallam Garba Shehu, with regards to the case of Col. Sambo Dasuki and Ibrahim El-Zakzaky did not derive from any of our known laws. It is scandalous that people of their standing in government will speak like that. They must realise that when they speak, they are not only speaking to Nigerians but the international community.

It is such a shame to any enlightened mind that a Minister of the Federal Republic of Nigeria will be making these kinds of statements that citizens are kept under lock and key in their own interest. I have never heard such absurdity in all my life. What is going on is unfortunate; our country is at the brink of lawlessness with those at the helm of affairs stocking the fire of disrespect for the rule of law.

Without respect for our laws, anarchy takes over. We all must join hands to ensure that the rule of law is respected by all and sundry because it is the constitution that is the basis of most, if not all human societies, as we know it today.