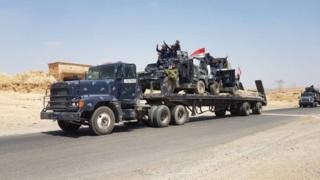 Iraqi ground forces have begun an operation to retake Tal Afar, one of the last cities in the country held by the Islamic State group, officials say.

In a televised speech announcing the offensive overnight, Prime Minister Haider al-Abadi said the jihadists had the choice between “surrender or die”.

Tal Afar, which has a mainly Shia-Muslim population, fell to IS in 2014.

It sits on a major road between Mosul and the Syrian border that was once a key supply route for the jihadist group.

Iraqi warplanes have bombarded IS positions in the city for several days, in preparation for ground operations.

On Sunday Mr Abadi, dressed in a black military uniform and standing in front of an Iraqi flag and a map of the country, announced the “start of an operation to free Tal Afar”.

“I am saying to Daesh [the Islamic State group] that there is no choice other than to surrender or die,” he said.

He finished his speech with an address to Iraqi troops: “The whole world is with you.”

Hours before Mr Abadi’s statement, the Iraqi air force dropped leaflets over the city warning people to “prepare” for the latest assault.

“The battle is imminent and the victory is coming, God willing,” the leaflets read.

Tal Afar is surrounded by government troops and Shia militiamen in the south, and Kurdish Peshmerga fighters in the north.

Last month, a senior Iraqi commander who once served as mayor of Tal Afar said there were between 1,500 and 2,000 militants and their family members left in the city.

Maj-Gen Najm al-Jabouri told Reuters news agency the jihadists were “worn out and demoralised” and that he did not expect a fierce battle for the town like the one for Mosul, which lasted almost nine months and took a heavy toll on Iraqi forces.

He also noted that only one part of the town had narrow streets comparable to those in Mosul’s Old City. Few civilians are believed to be left in Tal Afar, with 49,000 having fled since April.

Beside Tal Afar, IS controls territory around Hawija, 170km (105 miles) to the south-east; and from Ana to Al-Qaim in the Euphrates river valley, 220km to the south.