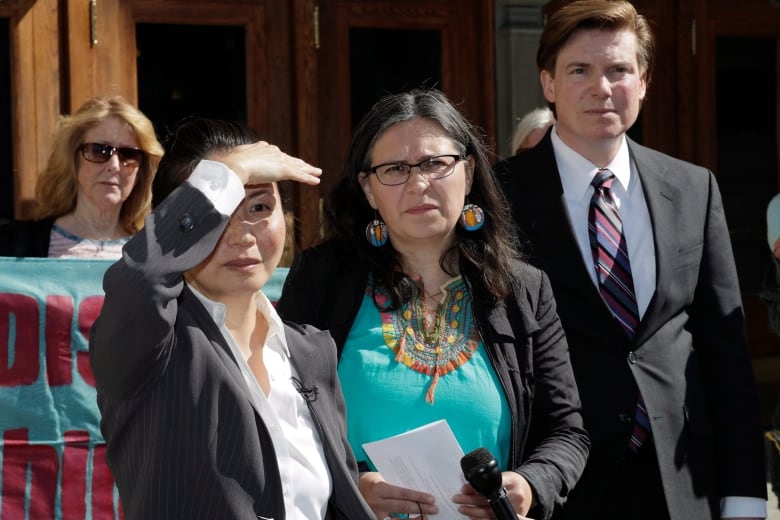 Their journey through the night was treacherous. Two were so badly frostbitten they ended up in the hospital. One was likely to lose part of her hand. Four didn’t make it.

But for the Indian migrants who survived the trek through blowing snow and freezing temperatures over the border from southern Manitoba into the United States last month — in what authorities have described as a case of human smuggling — advocates say there could still be rough terrain ahead.

And while all seven have been released from U.S. Border Patrol custody and ordered to report to Immigration and Customs Enforcement at a later date, the immigration proceedings that will decide their fates may not be top of mind.

“They’re going to have to learn to survive,” said Maru Mora Villalpando, a community organizer and founder of La Resistencia, a grassroots organization that works with detained migrants in Washington state.

Though little is known about the migrants, a court document filed last month in connection with the case said all seven spoke Gujarati — a language spoken in western India — and little or no English.

“The first thing is to find someone that speaks your language,” Mora Villalpando said.

“And sometimes, that doesn’t guarantee support. There will be people that will take advantage of them because they’re just arriving.”

For people who get to the U.S. by walking over the border, that’s often just where the challenges begin, said Victoria Carmona, immigration attorney at the Chicago-Kent College of Law.

“Essentially, you’re relying on whatever savings you may or may not have, or anything that you had with you that wasn’t stolen on your journey here. The likelihood is probably nothing,” Carmona said.

“We have a difficult system here, and that’s where the hope is that they have some community support because it’s never easy to immigrate.”

The money and time it costs to get a work permit often puts that option out of reach — and those who can find a job under the table often face concerning working conditions, she said.

Even something as basic as getting medical care can depend on whether a hospital will waive the costs, because migrants not in the country legally don’t qualify for most public benefits, Carmona said.

And because many organizations meant to help migrants don’t have the resources they need to keep up with demand, people often have to rely on whatever networks of relatives they might have in the U.S. once they arrive, said Lakshmi Sridaran, executive director of the advocacy group South Asian Americans Leading Together.

“There aren’t a lot of supports in place for people once they’re released like this,” Sridaran said.

All those factors are compounded by the trauma the group is likely dealing with after surviving such a harrowing journey, Mora Villalpando said.

By the time they were discovered by Border Patrol agents on Jan. 19 — two in a van with a man indicted Thursday on human smuggling charges, five more on foot nearby — some had been walking in the freezing cold for over 11 hours, one of the men told authorities.

Not long after, police discovered the frozen bodies of a family of four who had gotten separated from the group during the journey — Jagdish and Vaishaliben Patel and their two kids, 11-year-old Vihangi and three-year-old Dharmik — just north of the border.

“Can you imagine … going through what this [group] went through?” Mora Villalpando said.

“What I want to stress is the level of trauma that people go through — and they don’t get therapy for that.”

While the seven migrants are no longer in custody, their journey through the immigration system is likely far from over, Mora Villalpando said.

In her experience, migrants are often still monitored and tracked through the use of ankle monitors or, more recently, a cellphone app with voice and facial recognition.

Both can present significant logistical challenges on top of the looming threat of deportation, with an ankle monitor making something as simple as putting on winter boots a challenge and mandatory check-in video calls making it hard to hold down a job.

“Just because you’re released from detention doesn’t mean you’re OK. Your case could last for years and years, or they can deport you immediately,” Mora Villalpando said.

Though there are legal options migrants can take to try to stay in the country, like applying for certain visas or making an asylum claim, each comes with its own set of logistical hurdles.

“People don’t choose having to go through the border this way because they just want the thrill of it. People do it because they’re desperate. There’s no other way for them,” she said.

While people from India often face long waits to be granted admission to the U.S., they also often struggle to have their asylum claims validated despite political repression of religious minorities and lower caste people in the country, Sridaran said.

And though immigration cases can last for years — sometimes over a decade — there’s no guarantee a migrant will get to stay, no matter how much of a life they build while they wait, Carmona said.

“Unfortunately, I have cases that get denied after 12 years, and that’s it,” she said.

“You’re in a perpetual limbo of really not knowing whether you’re here or there and what will happen. And I think it’s a stress that eats away at my clients, whether or not they realize.”

Do you have a tip or more information about this story? Email caitlyn.gowriluk@cbc.ca or karen.pauls@cbc.ca.