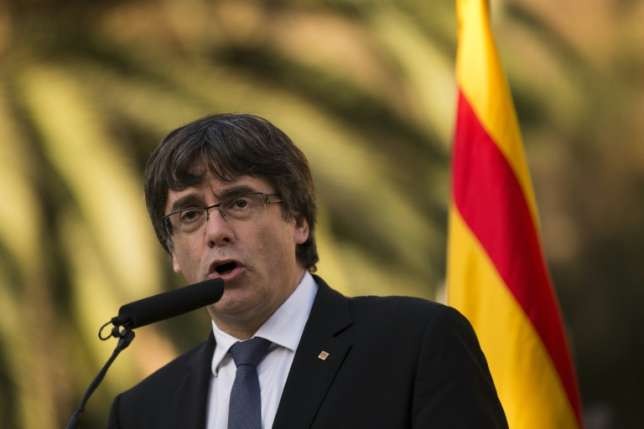 Spain watched nervously Monday as the clock ticked down on a deadline for Catalonia’s separatist president to decide if he wants to push ahead with independence despite international pleas for unity and dire economic warnings.

Carles Puigdemont last week said he was ready for Catalonia to “become an independent state” following an independence referendum on October 1 that went ahead despite a court ban.

But he immediately said he was suspending secession to allow time for negotiations with Madrid.

His ambiguous announcement fell far short of satisfying Puigdemont’s separatist allies, who are agitating for an immediate break from Spain, and received short shrift in Madrid.

Prime Minister Mariano Rajoy gave Puigdemont until 10am (0800 GMT) Monday morning to clarify whether or not he declared independence, and said the central government was ready to take direct control of the region unless he backs down.

If he pushes ahead, Puigdemont will have a three-day grace period, until Thursday, to change his mind.

Anything less than a full climb-down will likely see Madrid start to suspend Catalan autonomy — an untested move many fear could lead to unrest.

European Union officials are keeping a close eye on developments amid fears that Catalan independence could put further strain on the bloc as it grapples with Britain’s shock decision to leave.

Catalan regional television TV3 reported that Puigdemont would not give a “yes or no” answer on independence on Monday and would instead give Madrid a “more elaborate” response.

That is likely to prolong Spain’s worst political crisis in decades and deepen uncertainty that has already led more than 500 firms to start leaving the region since the beginning of October.

Catalonia, home to 7.5 million people, has its own language and distinct culture, but is deeply divided over independence.

Separatists argue the prosperous region is helping to prop Spain up, saying it pays more in taxes than it gets back and that a break from the rest of the country would allow it to prosper.

The Spanish government says growing uncertainty over Catalonia, which is deeply indebted to Madrid and which cannot borrow internationally, imperils Spain’s recovery from the financial crisis.

The two biggest Catalan banks have already moved their legal headquarters to other parts of Spain, while ratings agency Standard and Poor’s has warned of a recession in the region if the crisis drags on.

Leading economic indicators for Spain and Catalonia since 2007 and 2008

Puigdemont, a 54-year-old former journalist and father of two, is under intense pressure from Madrid and world leaders to back off, while being squeezed by his separatist allies to crack on with independence.

Rajoy said he is ready to invoke article 155 of Spain’s constitution, allowing him to retake full control of Catalonia — a so-called “nuclear option.”

And Puigdemont’s separatist allies have threatened mass strikes and protests in the event of a climb-down.

Adding to tensions is the expected appearance in court in Madrid of Catalan police chief Josep Lluis Trapero to be questioned on suspicion of sedition for allegedly failing to stop the October 1 vote.