Serie A Icardi hat-trick as Inter reign in Milan Luciano Spalletti’s Inter are now alone in second place, within two points of Napoli who they face next weekend. 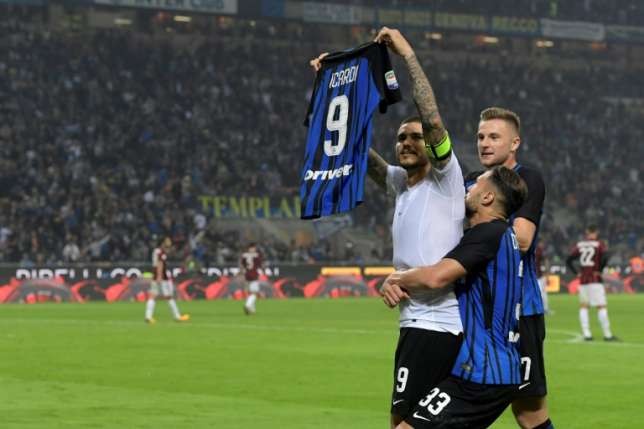 Mauro Icardi scored a hat-trick as Inter Milan kept pace with leaders Napoli with a 3-2 defeat of city rivals AC Milan in a fiery Serie A derby clash on Sunday.

Inter skipper Icardi sealed victory from the spot in the final minute in front of 80,000 spectators at the San Siro to complete his hat-trick after also scoring on 28 and 63 minutes.

Spanish forward Suso (36) and Giacomo Bonaventura (81) had twice put AC Milan back on level terms in the ‘Chinese’ derby between two clubs fuelled by multi-million dollar investments by their Asian owners.

With Juventus losing 1-0 to Roma on Saturday, Luciano Spalletti‘s Inter are now alone in second place, within two points of Napoli who they face next weekend.

“It’s too early to talk about a Scudetto challenge,” said Icardi after the game.

“We are doing things the right way from pre-season and now we have to think about the next match against a great opponent like Napoli.

“It’s a special match for me, because they are the leaders and play the best football in Europe.”

Napoli maintained their perfect run of eight wins from eight games with a 1-0 victory over Roma on Saturday.

Juventus are third after Ciro Immobile‘s second-half brace for Lazio condemned the reigning champions to a first home defeat, 2-1, in over two years.

Lazio are fourth equal on 19 points with Juventus with Roma four points adrift in fifth.

In a tense first half in the Derby della Madonnina the first chance came after 13 minutes when Antonio Candreva hit the crossbar from the edge of the box.

Both Suso and a Joao Miranda header went wide, but Inter took the lead with Icardi picking up a Candreva cross after 28 minutes.

Patrick Cutrone came on after the break and lifted Milan who got back into the game thanks to a beautiful curling Suso effort.

But Icardi restored Inter’s advantage from an Ivan Perisic cross before Bonaventura slid in to make it 2-2 with Samir Handanovic unable to clear.

Earlier Torino lost ground on the Serie A leaders after a 2-2 draw at Crotone as Atalanta also slipped up with a 3-1 defeat at Sampdoria.

Despite qualifying for the Europa League this season and earning a win over Everton and a draw at Lyon, Atalanta are struggling in Serie A.

Bryan Cristante opened with a 21st-minute goal in Genoa only for Giampiero Gasperini’s side to concede three in a 12-minute second half spree for Sampdoria.

Duvan Zapata got the equaliser on 56 minutes with Gianluca Caprari pulling the Genoa outfit ahead three minutes later and Karol Linetty sealing victory on 65 minutes.

Sampdoria move up to sixth place with the side from Bergamo now in 12th.

Torino settled for a point at Crotone with Lorenzo De Silvestri nodding in the equaliser two minutes into injury time.

Torino are now eighth, with Bologna moving just ahead with a 2-1 derby win over SPAL.

Earlier French striker Cyril Thereau scored in either half to get Fiorentina back to winning ways with a 2-1 success over his former club Udinese.

Brazilian defender Samir pulled one back on 72 minutes as Udinese fought back in the second half.

It was a third win of the season for Fiorentina who have suffered four defeats and move to 11th two places ahead of Udinese.