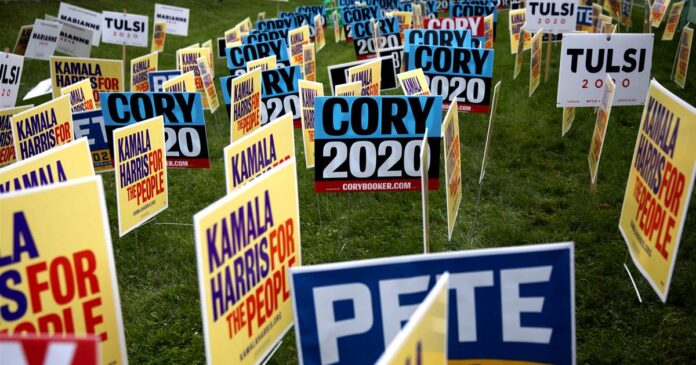 DECORAH, Iowa — Impeachment is rolling into the 2020 presidential primary like a winter storm, threatening to blot out the sun for candidates desperate for attention and sweep several leading candidates off the trail entirely just before the Iowa caucuses early next year.

And there’s not a thing the Democratic contenders can do about it.

“You know, a lot of politics is about the illusion of control, when really we’re all subject to the winds of history that are blowing around,” Pete Buttigieg, the mayor of South Bend, Indiana, said in response to questions from NBC News aboard his campaign bus.

While the timing of the Democrats’ impeachment effort in Washington, D.C., remains unclear, the House hopes to finish its investigation into President Donald Trump by the end of the year, which could mean that a Senate trial would likely begin in early January — just weeks before Iowa’s critical first-in-the-nation caucuses Feb. 3.

The candidates on the stump here rarely talk about impeachment. And voters, while deeply interested, don’t ask about it too often, since all the 2020 hopefuls have now come onto the same page to support it.

But the timing of a potential trial of Trump is an enormous election wild card that everyone agrees will disrupt the race, though they don’t know exactly how.

If the House votes to impeach, the six senators running for president, including top-tier candidates Sens. Elizabeth Warren of Massachusetts and Bernie Sanders of Vermont, would be recalled to Washington to participate in the Senate trial.

That could leave candidates who are not involved in the process, including Buttigieg and former Vice President Joe Biden, with Iowa all to themselves, while those senators pinned down at the Capitol scramble to deploy surrogates or reach Iowans in other ways, such as tele-town halls.

Buttigieg cited an Abraham Lincoln quote — “I claim not to have controlled events, but confess plainly that events have controlled me” — to make the point that governing is often about dealing with uncontrollable events, But, he acknowledged, there might be some advantage for candidates who can stay far from the fray in D.C.

“I think that helps me concentrate on what’s on voters’ minds,” he said. “And I think it helps me remember that the impeachment process and the election process should be totally separate anyway.”

But at the same time, the national media’s focus and Americans’ attention span for politics will likely be consumed by the drama unfolding 1,000 miles away from here.

“It’s a huge problem for us,” former Rep. John Delaney, a long shot who is still praying to break out, said at a Des Moines bar, where the televisions were tuned to cable news channels carrying the latest developments in the Ukraine saga. “The challenge we’re going to have is to not spend all our time talking about this stuff.”

Senate rules require all members to be present for the trial and Majority Leader Mitch McConnell, R-Ky., has said he expects the trial to take place six days a week. All the senators running for president have said they will fulfill that duty and participate.

“The campaign becomes secondary,” New Jersey Sen. Cory Booker told reporters. “We are doing something that is with the gravity of removing the sitting president from office. I will be there. I will be focused. And I will do my work.”

It is unclear how long Trump’s Senate trial would last. The last time the Senate held an impeachment trial, in 1998 for President Bill Clinton, it took five weeks.

There are very few direct flights from D.C. to Des Moines, and none to smaller cities in the state, making it almost impossible for senators betting on a strong showing in Iowa to visit during their one day off a week from the trial.

Historically, candidates have spent virtually all of January stumping in Iowa and New Hampshire, whose first-in-the-nation primary comes one week after Iowa’s caucuses, on Feb. 11.

Campaign brass already have begun gaming out potential contingency plans, aware they’re going to have to get creative. They’ll send spouses and other high-profile surrogates to events, but know that won’t attract nearly the attention that the candidate themselves would draw.

“Everybody on God’s green creation is going to do TV hits every couple of hours from the (Capitol) Rotunda,” a senior campaign aide lamented, requesting anonymity to speak candidly.

Most senators play a low-key role in the impeachment trial, serving essentially as jurors and speaking little during the proceedings, which frustrated some during Clinton’s impeachment.

“I don’t know what twists and turns this is going to take, and I don’t know how much time it will take, but I will plan for any contingency,” Minnesota Sen. Amy Klobuchar said. “But last time I checked, the president has to go with the flow and be able to handle many things at once, and that’s what I’ll do here.”

Some may thrive in speaking to the media on the sidelines, such as California Sen. Kamala Harris, a former prosecutor who earned plaudits for her interrogation of Supreme Court Justice Brett Kavanaugh and other witnesses.

Others, such as Warren or Sanders, who have made their campaigns focused less on the president than their own visions to overhaul a post-Trump America, could find it harder to carve out an angle amid the impeachment din.

In the two times that a president has been put on trial, some lawmakers decried the process as a waste of time and a complete bore.

“Millions of senior citizens cannot afford their prescription drugs,” Sanders, a House member at the time, said in December 1998, days before Clinton’s trial began. “And this House is going to vote to send to the Senate for a trial to go on month after month after month to discuss where Bill Clinton touched Monica Lewinsky.”

And some Iowa Democrats may be turned off by the partisan spectacle in Washington.

Shane Bissell, a retired union worker from Chelsea, a town of a few hundred people, said he views the impeachment push against Trump as a “waste of time … and money” since Republicans are unlikely to vote to remove the president from office. “I’m really not that interested to see it all go down.”

Harold Schaitberger, the president of the International Association of Firefighters and a Biden supporter, worried that it will turn off his members in states like Iowa, which saw the biggest swing in the country from Barack Obama to Trump.

“I am concerned the impeachment process can be a potentially negative factor in trying to bring back what were traditional Democratic voters in the key battleground states where this presidential election will be decided,” he said.

“For the firefighters who voted for Donald Trump — and lots of them did in 2016 because they felt he spoke to them and they felt the Democratic nominee did not — and for some of those union members, some of those blue-collar workers, those working family members in those key states, impeachment can be problematic.”