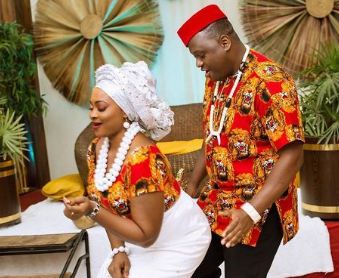 In Igbo culture, ” Iju Ase” is used to refer to the period before marriage. That Igbo culture’s most important aspect has been treated with disdain for decades, with disastrous results.

“Iju ase” refers to a background check on a person’s family and status before committing to a long-term relationship.

As a result, I’ve seen women talk about getting married to their ideal partners – without realizing that the men are already married and have lied to them about their status as unmarried. ” Iju ase” is still the first question on my mind.

Because traditional marriages are now performed in Lagos and Abuja after meeting someone on the road, people simply set a date and get married there. I’m curious as to how she would know he has other relatives.

Money isn’t everything; happiness and sanity are. When it comes to marriage, why does this man keep getting married and then forcing all of his wives to flee? In the end, it’ll be taken care of by “iju ese”.

In Igbo culture, marriage is seen as an institution. Nothing is hurried. It’s a methodical approach that’s needed. It’s a long process. You may be wondering why our parents and grandparents seem to be able to live peacefully and overcome some obstacles.

Do you think that not doing this background check plays a significant role in Igboland’s high divorce rate today?

You meet someone and you want to show your friends and the rest of the world that you are now Mrs or Mr (or vice versa). If you’re a bride-to-be, you want to show off your wedding gown, expensive clothes, and rings. There is no longer a need for societal pressure.

You just want to get married so you can be taken care of. If all you want is cash and glitz, you’ll be happy. This is a good thing. You have to ask yourself, are you blindfolded by the flashy things you are seeing, and therefore forgetting who you are going to get married to. What’s his history?

We all know that things change. Season and time. We can now see people on social media and marry them because of it. That’s a good point. It’s vital that we do the same for them. You should spend more money to travel and do a background check on the man you’re marrying before you say “I do.” What you see should not overexcite you. It’s not enough to sound intelligent, dress well, drive a nice car, and live in a nice house.

Also Read: Google Market Finder, What Is It And How It Will Leads To Sales For Your Business

Igbo parents are responsible for this

Parents are responsible for this aspect of “Iju ase.” I doubt you’d even be aware. You can do it, too. They don’t want to marry outside their community because of this. Due to their familiarity with the families, they are checking in with them. They’d know what to do if something went wrong. It’s important to note, however, that this doesn’t guarantee a happy marriage. However, it upsets them.

Men should also do background checks on potential spouses. It’s important that our sense of reason isn’t overwhelmed by beauty, handsomeness, flashy things, or wealth

I know some women who are married to extremely wealthy men, but who yearn for attention, love, and fulfillment. There is a sense of alienation in their own home. They can see money, but they can’t feel it or touch it. In order to avoid this, I advise women to ask questions before getting married. Even if you’re not wealthy, it’s important to have something going for you before you get married.

A very important part of Igbo culture is “iju ase”. During this exercise, keep in mind that family or genealogical psychology is being tested. Does their blood contain any traces of psychosis or madness? Others are paranoid. For example, a person may appear to be caring, but he or she can suddenly change his or her mind and even stab their spouse over a minor disagreement.