If you live in Ontario, you’ll pay less for electricity, effective today 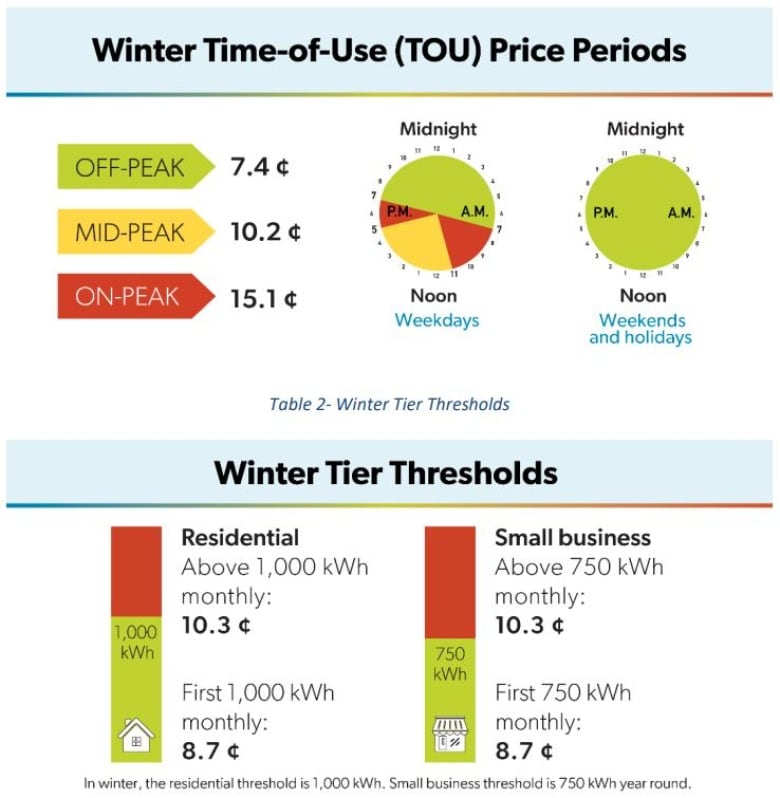 Ontarians struggling with the rising cost of living may notice something unusual when they look at their next hydro bill.

The Ontario Energy Board (OEB) has announced a decrease in the cost of electricity for residential and small business customers, which takes effect Tuesday. Depending on the pricing plan, people will see drops in price of as much as two cents a kilowatt hour (kWh).

The drop in price is mainly due to changes in the market, says Joel MacDonald, the founder of Energyrates.ca, a website that compares energy prices.

“So, it would be typical to see a slightly lower rate over the winter than it would over the summer.”

MacDonald says the drop is not a significant one compared to last winter’s decrease in Ontario, but he points out other provinces are raising their rates — for example, Albertans are seeing increases ranging from three cents to 28 cents per kWh.

Prices for both time-of-use and tiered plans will go down, according to the province’s electricity and natural gas regulator. That change will remain in effect until the end of April next year.

The OEB announced time-of-use (TOU) plan decreases, where customers are billed different amounts depending on when they use electricity, across the board. Customers using electricity on weekdays during on-peak hours (7 a.m. to 11 a.m. and 5 p.m. and 7 p.m.) will now pay 15.1 cents per kilowatt hour (kWh), which is down from last winter’s pricing of 17.0 cents per kWh.

Tiered pricing, where customers pay a flat rate for the first 1,000 kWh during winter months and a higher rate if they exceed that amount, has also gone down by just over one cent per kWh.

MacDonald says this is a good time for Ontarians to reassess whether they want to be on a TOU or tiered plan.

Savings depend on type of plan

Ontario introduced smart metres in 2005, says MacDonald, which measure not just the amount of electricity usage but the time of day electricity is being used.

He credits these metres for lowering the amount of electricity Ontarians have used since their introduction.

However, in the first year of the pandemic, the OEB gave residential and small business customers the option of being billed by TOU or tiered plans.

“In order for the time-of-use system to provide cost savings over the tier system — assuming the average household — you would have to use more than 75 per cent of your usage in the off-peak period.”

He says this number is difficult to hit because standard houses have a base load consumption, driven by having various appliances on all the time.

With the tiered system charging 8.7 cents per kWh (effective Tuesday), MacDonald says savings are easier as the average household doesn’t go over the 1,000 kWh threshold needed to incur a higher rate.

MacDonald says according to the OEB, the average consumer that uses 60 per cent of their electricity during off-peak hours will save eight per cent by switching to the tier system.

Even with some savings on the near horizon, many Ontarians are still unable to pay their electricity bills.

“A lot of people are feeling the squeeze at the moment with the rising prices of everything, from groceries to gas” said Neftali Bonilla from the Neighbourhood Information Post, an organization that connects low-income individuals with supportive services.

“So it’s either they buy groceries or pay their energy bill,” said Bonilla, who coordinates the organization’s energy assistance program.

He says a lot of people, including seniors, young adults and single-parent families, have come to his group seeking assistance in the form of grant programs.

One of those programs, the Low-income Energy Assistance Program (LEAP), allows people to apply for assistance if they’re behind on their energy bill and receive up to $1,000 to help pay it off.

Bonilla says they have seen huge increases in applicants.

“So far this year, from January to September, we’ve assisted 873 … Just for the month of October, we’re looking at assisting probably around 100 households.”

But MacDonald says Ontarians will never have to worry about having their electricity turned off during the winter as there is a disconnect ban between Nov. 15 and April 30.

“If you are struggling with these exceptionally high bills, know that while it might hurt your credit, you’re not going to have anything disconnected until April 30th.”