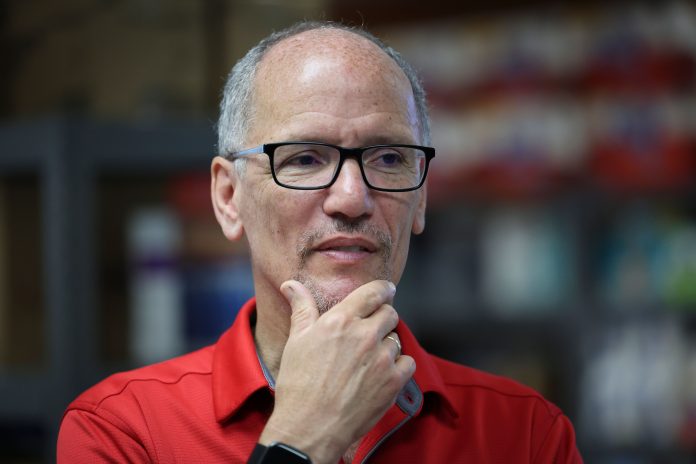 SILVER SPRING, Md. ― Tom Perez took over as chair of the Democratic National Committee in the aftermath of a 2016 presidential race that tore open the divide between progressives and moderates within the party. Throughout his four-year tenure leading the organization, he repeatedly had to navigate the demands of left-leaning and centrist factions as Democrats worked to take back both Congress and the White House.

Now, as Perez makes his own run for governor of Maryland and the Democrats he helped elect struggle to pull their agenda across the finish line in Washington, something surprising is happening: In Perez’s race and others, the ideological battles that defined the past four years of Democratic primaries are cooling, with experience and background becoming more important as voters look for candidates who can tackle inflation, climate change and a sclerotic political system.

“The questions voters are asking now are really centered around who is battle-tested to handle, to multitask on these issues,” Perez told reporters after rallying his campaign volunteers outside an early voting site in this Washington suburb. “It’s about who can be both a dreamer and a doer, who can articulate a vision that is consistent with my values but then also get stuff done.”

Ideology is not wholly irrelevant. Elected officials, unions and well-funded outside groups are still studying candidates’ positions on key issues before making endorsements and spending decisions, and some races, especially for deep-blue House seats, are still turning into progressive vs. moderate wars.

But the Democratic gubernatorial primary here illustrates how ideology has faded to the background. Three candidates in a crowded field are thought to have a chance to win: Perez, author and executive Wes Moore and longtime state Comptroller Peter Franchot. Perez and Moore are slightly to Franchot’s left, but the candidates have argued more over who is best prepared to take over the state rather than split hairs over policy details.

“I’m from the GSD wing of the Democratic Party,” Perez declares in one of his ads, explaining that “GSD” stands for “Get shit done.” In the spot, Perez says he’ll focus on protecting abortion and voting rights and lowering the cost of prescription drugs, never mentioning costlier causes like “Medicare for All” or free college. Other ads mention his time running the Civil Rights Division of the Justice Department and his time as a local elected official.

This focus on biography and electability has replicated itself in other Democratic primaries, including the Florida governor’s race and Senate primaries in Pennsylvania and Wisconsin.

The decline of ideological clashes has a multitude of causes, Democratic operatives and candidates said: The coronavirus pandemic, and the economic misfortunes that have accompanied and followed it, have voters more focused on short-term fixes, such as gas price relief, than long-term ambitions, like Medicare for All. And the relative unity of the Democratic Party during President Joe Biden’s administration, with essentially two Democratic senators holding up the agenda, has made the ideological gaps seem surmountable.

Jealous has endorsed Moore, whose own invocations of “big ideas” and a “bold future” can sound familiar, but when asked to separate himself from the crowded field ― at one point there were 12 candidates for the Democratic nod ― Moore immediately turned to his background.

“I’m not a career bureaucrat. I’m not someone who’s been running for office for the past 40 years,” Moore said in an interview, not-so-subtly referring to Perez and Franchot. “I’m someone who has spent my entire career working in and with communities to make big changes.”

The focus on biography has been a double-edged sword for the 43-year-old Moore. His varied and glittering résumé ― Rhodes Scholar, Army combat veteran, Wall Street executive, bestselling author, TV show host, nonprofit CEO ― has earned him the endorsement of Oprah Winfrey and whispers among Democrats about his political career’s sky-high ceiling. An ad narrated by Winfrey focuses almost exclusively on his biography.

“A life spent lifting up others,” Winfrey says in the ad. “The type of transformational leader that these times demand.”

But his opponents have repeatedly argued he has embellished his résumé, noting he has described himself as a Baltimore native even though he did not live in the city until he was a college student and failed to correct interviewers who incorrectly said he won a Bronze Star. (Moore has repeatedly denied any wrongdoing.)

“I’ve been Senate-confirmed twice,” Perez said, contrasting himself with Moore. “I’ve run for office twice. I’ve been vetted for vice president in 2016. I won’t spend the general election campaign explaining something that I did in the past or that I didn’t do in the past.”

The candidate whose past voters are most familiar with is the 74-year-old Franchot, who has held the comptroller office since 2006 and served in the legislature for decades before then.

“Experience matters,” Franchot says directly to camera in one of his ads before promising to guide the state through what he says will be rocky fiscal times ahead.

Public polling of the race has been relatively scarce. High numbers of undecided voters, along with a crowded field ― former Education Secretary John King and former Maryland Attorney General Doug Gansler are also expected to earn chunks of the vote ― means the race could be won with less than 30% of the vote.

Operatives working on the race expect about 600,000 people to cast their ballot, with as many as half voting by mail. But a veto from GOP Gov. Larry Hogan means election officials cannot even start counting mail-in ballots until Thursday, making it unlikely Democrats will know who won the race until next week.

Perez, who served as labor secretary at both the state and national level, is counting on the backing of a host of unions to make the difference. Multiple chapters of the Communication Workers of America, the International Brotherhood of Electrical Workers, the Service Employees International Union and the American Federation of the State, County and Municipal Employees have endorsed him.

He also has the backing of House Speaker Nancy Pelosi (D-Calif.), Minnesota Attorney General Keith Ellison ― whom he famously beat to become DNC Chair in 2016 ― and a host of Latino organizations.

But despite having far less political experience than his opponents, Moore has won many of the endorsement battles. He has the endorsement of the Maryland State Education Association, whose famous “apple ballot” guides the decisions of many suburban voters, the backing of three members of the state’s congressional delegation and of more members of the state legislature than either Perez or Franchot.

Biden won Maryland by 33 percentage points in 2020. The state has both one of the most college-educated populations in the country and one of the largest Black populations, making it politically friendly territory for Democrats. But Hogan remains extremely popular here, and the only Democrat to win a governor’s race this century is Martin O’Malley.

Republicans are facing a competitive primary of their own, with Hogan-backed Kelly Schulz running against Trump-endorsed attorney Dan Cox. Democrats would prefer to face Cox, whose full-hearted embrace of Trump is likely to repel voters who have backed both Biden and Hogan in the past.

“I don’t think you can credibly claim that in governor’s races we have nothing to worry about,” Perez said.