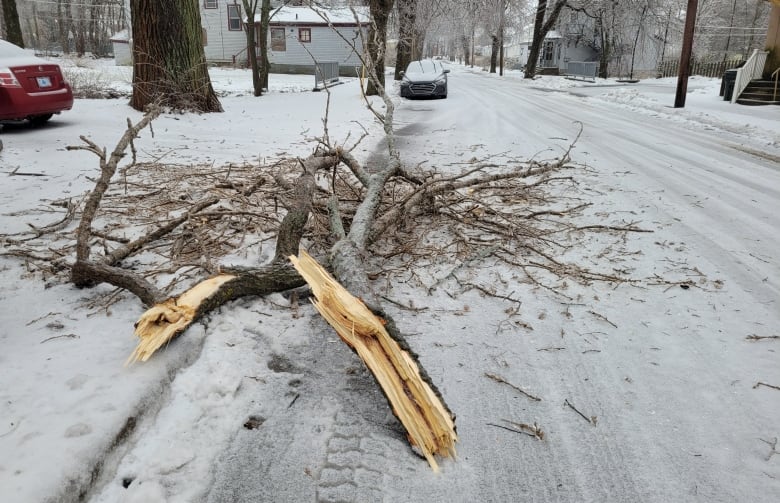 Trees throughout the province were caked in a thick layer of ice, causing branches to droop. Some snapped under the weight, blocking roadways and damaging power lines.

Nova Scotia Power crews worked through the night to restore power to tens of thousands of customers. As of 2 p.m. local time Saturday, there were still more than 50,000 customers without electricity.

The power outages began on Friday morning, as a mixture of snow, rain, freezing rain and ice pellets swept through parts of the province.

Matt Drover, a storm lead with Nova Scotia Power, said the ice buildup on trees and power lines and icy road conditions continued to be a challenge on Saturday for crews restoring power.

“We’re working very closely with the provincial [emergency management office] and Public Works to make sure we’re getting access to our infrastructure,” Drover said Saturday.

“They’re sanding and salting the roads so that our line trucks can get to the equipment as quickly as they can.”

CBC meteorologist Ryan Snoddon said there was more than 29 hours of freezing rain and drizzle recorded at the Halifax airport.

Snoddon said as the storm departed from west to east on Saturday, increasing northwesterly winds would usher in cooler temperatures, as well as lingering flurries.

He said winds were expected to gust to 40 km/h for most of the province and could gust up to 60 km/h near north-facing coastlines, which could lead to more power outages if ice-coated trees are downed onto power lines.

But Drover said he didn’t expect winds to be a major issue Saturday. He noted the winds were not above warning levels, so crews would be able to continue working.

“They could impact the trees that are weighted with ice, but we don’t expect to see significant outages today with those winds,” he said.

Drover noted that this was the fifth major storm the province has seen this year. He said there were more than 500 people working in the field and hundreds more behind the scenes on Saturday.

With a significant amount of ice build-up on trees, lines &amp; other equipment, we ask customers to stay safe by treating all downed lines as electrified! Please stay away from downed electrical equipment &amp; report to us at 1-877-428-6004. For immediate safety risk, please call 911. <a href=”https://t.co/14Q3hV36Ja”>https://t.co/14Q3hV36Ja</a>

Some recreational centres and businesses delayed opening on Saturday.

Halifax Regional Municipality said the George Dixon Centre in the city’s north end will open as an emergency shelter for those without housing starting at 9 p.m. local time. St. Matthew’s United Church is open as a warming centre from 9 a.m. to 9 p.m.

For a full list of closures visit CBC Storm Centre.

Halifax Transit bus, Access-A-Bus and ferry service was scheduled to gradually resume service starting at 10 a.m. local time Saturday. All bus routes were running on a snow plan and the service warned there may be delays and cancellations.