Icy roads, blowing snow lead to pileups on highways 40 and 640 near Montreal 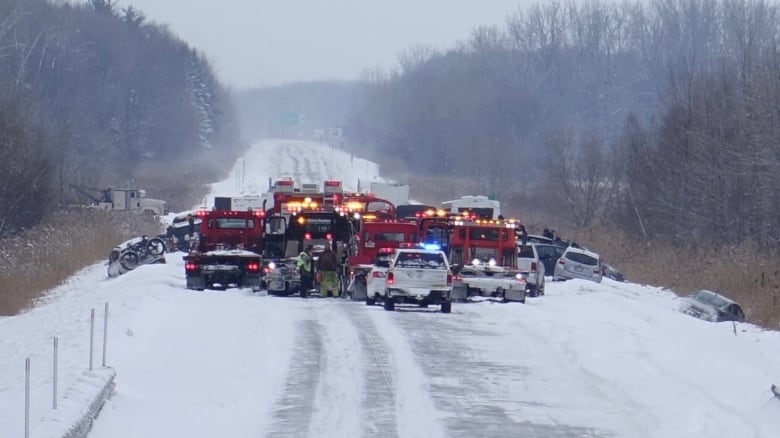 As blustery, snowy weather began moving into southern Quebec on Sunday, there were at least two major pileups on highways not far from Montreal involving dozens of vehicles.

A pileup on westbound Highway 40 in Saint-Sulpice, about 20 kilometres east of Montreal, caused severe congestion for several kilometres earlier in the day. Provincial police say more than 75 vehicles were involved, but only minor injuries were reported.

Mario Labrecque was on his way back to his Laval home, Sunday when he came upon the initial pileup.

He managed to stop in time, but those behind him were not so lucky.

Labrecque said his was among about 10 cars that weren’t damaged in the multi-car collision that left vehicles scattered across the road and in the shoulders.

He said the blowing snow conditions made it difficult to see and the road was “totally icy.” 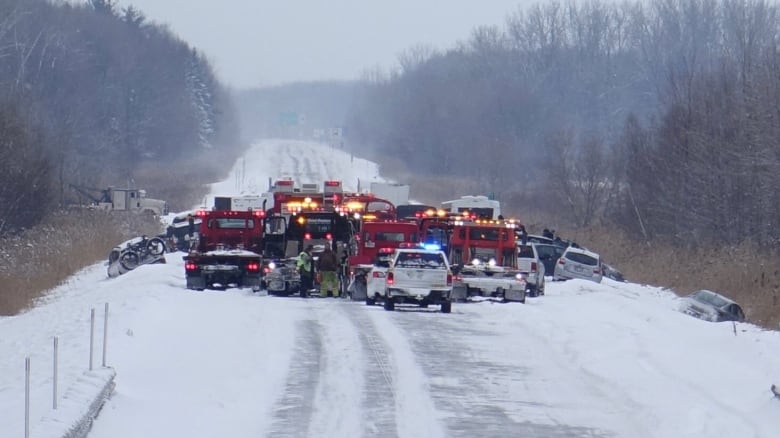 Highway 40 westbound was closed in Saint-Sulpice, Que. Sunday after dozens of cars collided, leaving them scattered across the roadway and in the shoulder. (Mathieu Wagner/Radio-Canada)

He said there weren’t any major injuries that he had heard of, though a pregnant woman was quickly taken away by ambulance as a precaution.

Stuck in traffic for over an hour, Labrecque watched as authorities and tow truck drivers worked to get the road opened again.

“There’s a lot of damage,” he said. “They’re crashed all around.”

Some of the people who were stuck made the best of a bad situation, breaking out the hockey gear to help pass the time.

During the same period, there was another pileup of about 20 vehicles on Highway 640 in Bois-des-Filion, just north of Laval.

That collision closed the westbound highway at the 28-kilometre mark, not far from Route 335, at around 10:40 a.m.