”I Will Give You Everything I Have” – Davido And Chioma Hold Naming Ceremony For Their Son, Ifeanyi Adeleke (Video) 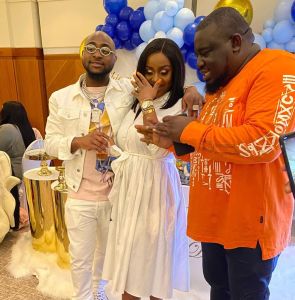 ”I Will Give You Everything I Have” – Davido And Chioma Hold Naming Ceremony For Their Son, Ifeanyi Adeleke (Video)

Music superstar, Davido and his betrothed, Chioma Avril have

officially held the naming ceremony for their son, Ifeanyi Adeleke.

During the ceremony, Davido revealed that he has been dating Chioma since he was 18 years old as he prayed for their son,

David Ifeanyi Adeleke Jnr at the naming ceremony that was held in London today 9th of November, 2019.

Davido had a moment while praying for his son, he said the son will be 1000 times more than he has ever

accomplished on earth and that he and Chioma are deeply in love, as such the son was

born into love. It was a very emotional video, you can watch the video below: