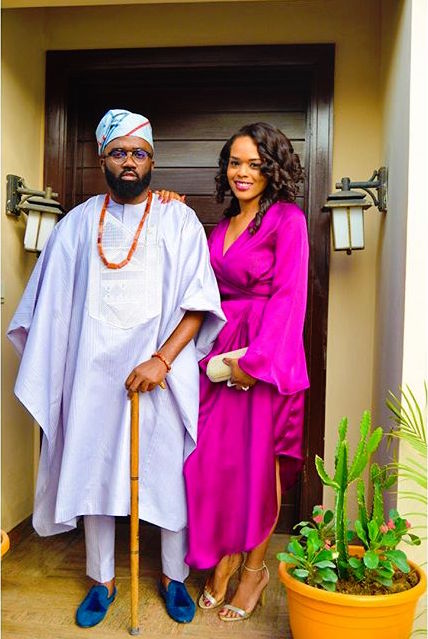 Noble Igwe and his wife Chioma

Entrepreneur and style influencer Noble Igwe has begun a new series detailing his experience as a first time dad.

Titled Daddy Jax- Memoirs of a First-Time Dad, Noble, in the first series stated that although him and his wife Chioma‘s daughter Jasmine is just four months old, “her journey from God to us started a while ago and I’m writing this diary so when she’s old enough, she understands what her mum put me through in the name of pregnancy hormones and all that jazz Chioma swept under the carpet with ‘We are two’”.

He talked about a regular discussion between him and Chioma after they discovered she was pregnant, and was advised by the doctor to not pick up heavy things. The discussions looked like this:

Nobs: I’m coming, I’m trying to round up this TV show

*Getting to the room*

Chioma: Please help me put on my slippers

Chioma: Baby, remember that the doctor said I shouldn’t be bending over

Nobs: Even to wear your slippers

Chioma: Oh, okay, let me wear it then. Sha remember that I warned you.

Nobs: It’s alright, let me do it

All these didn’t bother me as much as her new diet, Noble said. He shared another conversation to show why:

Chioma: Babes, where are you?

Nobs: On my back, Do you want anything?

Nobs : Emmanuel is not around?

Chioma: He is, I want Suya and Ice Cream.

Nobs : How in the name of God are you going to eat Suya and ice cream together?

Chioma : I think that’s what the baby wants?

Nobs : The baby whatsapped you?

Chioma : No love, but I can tell

Nobs : I’d drive through Buka Hut and Cold Stone but don’t call me to sit with you in the toilet.

“Jax came on a Tuesday but I’m not going to be like “It was the best moment of my life” because for the first few hours and days, I was more interested in my wife recovering fully. Don’t get me wrong, I was happy to carry her in my arms but I didn’t know her yet and I wanted to be sure that my wife and mother of my now-born-child was recovering just fine,” he said.

He talked about the first night and why she wasn’t surprised to see that he had full beard on his cheeks and chin.

“The First night, Chioma was sleeping so I fed Jax for the first time and occasionally she opened her eyes to look at me. Going by the pictures from the biblical era, I was sure that Jax had seen a lot of beard gang members in heaven and so wasn’t surprised to see her daddy with full beard,” he said.