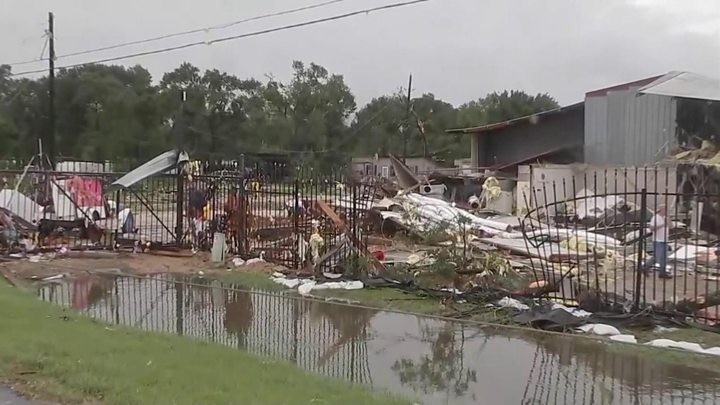 Texas will be hit by “catastrophic and life-threatening flooding”, the US National Hurricane Center has warned, as Hurricane Harvey moves inland.

The category four storm – the biggest to hit the US mainland in 13 years – battered areas of the Texas coast for hours before its winds were downgraded to category one.

Some residents are feared to be trapped in collapsed buildings and there have been widespread power outages.

Torrential rains are expected for days.

Up to 40in (101cm) of rain could fall in some areas of the middle and upper Texas coast, the hurricane center (NHC) warned.

Several places are already reported to have received well over 10in.

Coastal areas will also be flooded by storm surges during high tide, the NHC said.

Earlier, Harvey made a double landfall: north-east of the city of Corpus Christi initially late on Friday local time, then just north of Rockport a few hours later.

If they drop further, Harvey, which is moving at extremely low-speed, will be classified as a tropical storm.

Utility companies say more than 200,000 customers are without electricity.

Main concern is for Rockport

Harvey was pretty ferocious when it came ashore, with screeching wind all night. We saw a reasonable amount of damage being caused by debris flying through the air.

There’s no sign though of any serious structural damage in the immediate vicinity here in Corpus Christi. But the main concern is for the town of Rockport, where the eye of the storm came ashore.

There is concern there about a number of buildings.

After freeing up federal aid for the worst-affected areas, President Donald Trump praised emergency services in a tweet, saying: “You are doing a great job – the world is watching! Be safe.”

Rockport, normally home to about 10,000 people, appears to have been the hardest hit town.

The roof of a housing centre for elderly people there collapsed, trapping people, 10 of whom were later taken to a county jail for treatment, according to local TV station KIII.

Emergency services said a school, a hotel and other buildings had also suffered structural damage.

Before the storm arrived, Mayor Patrick Rios had a stark warning for anyone who refused to leave town: “We’re suggesting if people are going to stay here, mark their arm with a Sharpie pen with their name and Social Security number.”

When the storm struck near Rockport, wind speeds were 125mph.

Authorities have not been able to inspect the full extent of the damage. Pictures posted on social media show collapsed trees and houses.

Port Aransas, a city on Mustang Island, near Corpus Christi, is also reported to have extensive damage. Local media reports say a search and rescue operation is under way at a trailer park.

Travis Pettis, a reporter with the Caller Times newspaper in Corpus Christi, told the BBC that strong winds when the storm arrived made the rain feel like “needles”.

“It was pretty crazy out there. The winds, I don’t know what [speed] they topped at but you could barely even walk,” he said.

Trees came down in the city and power supplies were cut, but thousands of residents had heeded warnings and boarded up their homes before fleeing.

Governor Greg Abbot said it was obvious Texas was confronting a “very major disaster”, and more than 1,000 National Guardsmen would help with the relief operation.

Harvey is the first major storm of the Atlantic hurricane season. It is forecast to meander across south-east Texas until Wednesday.

Oil-rich Houston, the fourth biggest city in the US, could face up to 20in of rain over the coming days.

Residents there should “not be complacent” and should stay at home and “ride out the storm”, Francisco Sanchez, a spokesman for Harris County’s emergency management office, told the BBC.

“The most severe weather is yet to come” in the Houston area, he said.

About 4,500 inmates from prisons south of Houston are being evacuated to other prisons in east Texas because the Brazos River nearby is rising significantly, officials say.

Are you affected by Hurricane Harvey? Let us know about your experiences. Email haveyoursay@bbc.co.uk with your stories.