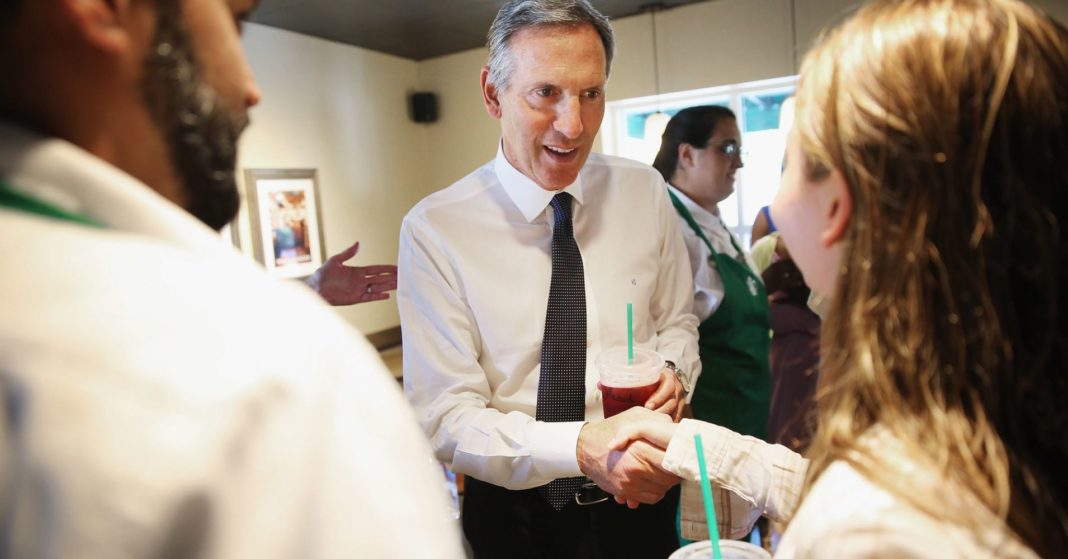 Former Starbucks chairman and CEO Howard Schultz is gearing up to visit early caucus and primary states as he mulls an independent run for president in 2020, CNBC has learned.

Schultz will likely travel to Iowa, New Hampshire, South Carolina and Nevada to speak with voters while he contemplates entering the race, according to people with direct knowledge of the matter.

“He’s going all around the country. Those states are certainly part of the conversation,” a person with direct knowledge of Schultz’s plans told CNBC on the condition of anonymity.

The dates and specific locations within the states are “not all locked in,” this person added. Schultz’s book tour schedule has yet to include any of these states, but his website also notes “more dates and locations coming soon.”

While going around the country to promote his new book, “From the Ground Up,” Schultz is also looking to gauge voter interest in a potential independent run at the White House. Even though Schultz isn’t looking to run for either major party’s nomination in the primary season, visiting these states could give him a strong read on where the electorate stands ahead of 2020.

Neil Levesque, the executive director of the New Hampshire Institute of Politics, told CNBC in a text message on Wednesday that his organization invited Schultz to speak at their Politics & Eggs series late last year. The event has served as a platform for presidential hopefuls from both sides of the aisle looking to get out their message to constituents in the first primary state of the presidential election cycle.

The group has yet to hear back from him or his inner circle, Levesque said.

Tucker Warren, a spokesman for Schultz, did not deny that the former coffee chain CEO’s team was in the planning stages of the early caucus and primary state visits. Instead, he referred CNBC to Schultz’s public schedule.

Warren, a partner at public relations powerhouse Hamilton Place Strategies, added that he was on leave from the firm “to support Howard as a member of the communications shop.” Prior to his time at Hamilton, Warren was a communications director for the Financial Crisis Inquiry Commission, a committee appointed by the leaders of Congress in 2009 to investigate the causes of the financial crisis.

Warren did not respond to follow-up questions about Schultz’s invitation to Politics & Eggs.

Schultz’s preparation for visiting these states is the latest sign that the billionaire mogul is seriously considering a run for the White House – and that he is ignoring the overwhelming amount of criticism from the Democratic Party. Schultz has said he was a lifelong Democrat, but left the party because he had many fundamental disagreements with it, particularly over health care and tax policy.

Democrats are concerned that Schultz could play spoiler in a 2020 race. Democratic megadonor and media executive Haim Saban told CNBC on Tuesday that he believes a Schultz independent run would automatically give Trump a second term. Party donors in New Yorkare also enraged about Schultz contemplating a run as an independent.

Since his declaration that he’s examining an independent campaign, Schultz has lashed out at Trump, several 2020 hopefuls and Democratic freshman lawmakers.

In an interview with MSNBC’s “Morning Joe” on Wednesday, the former Starbucks CEO said he believes Sen. Elizabeth Warren’s proposal of a so called “wealth tax” and a variety of other ideas would lead to socialism. Warren, who has opened an exploratory committee for president, has introduced an idea of households with over $50 million an assets paying a 2 percent tax on their net worth every year. Those making over $1 billion would get hit with a 3 percent tax. Schultz has a net worth of $3.4 billion, according to Forbes.

Fellow billionaire and potential presidential candidate Mike Bloomberg also criticized Warren’s plan. The Massachusetts lawmaker responded on Twitter, claiming Bloomberg and Schultz, “keep a rigged system in place that benefits only them and their buddies.”

Yet Bloomberg, who has himself flirted with running for president as an independent, is now a registered Democrat and would run as one, he said. And he had his own warning for Schultz.

“In 2020, the great likelihood is that an independent would just split the anti-Trump vote and end up reelecting the President,” Bloomberg said in a statement earlier this week.

The former coffee executive also criticized Sen. Kamala Harris, D-Calif., who recently declared her 2020 candidacy. Schultz said he believes her idea of abolishing the private health insurance agency is “not American.” He has also claimed Rep. Alexandria Ocasio Cortez’s plan of a 70 percent tax rate on income above $10 million is not something that Americans want, even though some polls show otherwise.

The freshman New York congresswoman fired back in a tweet on Wednesday.