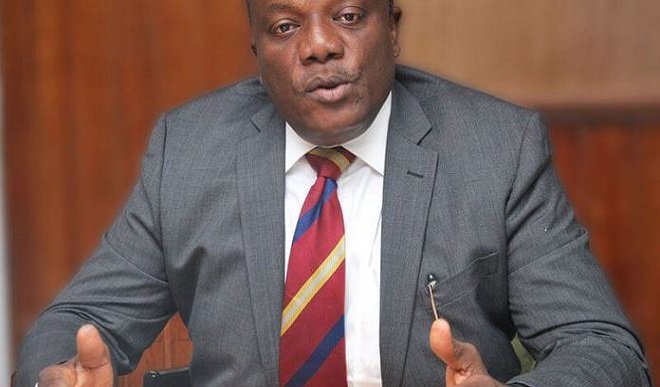 Dr. Davidson Isibor Akhimien, the presidential candidate of Grassroots Development Party of Nigeria (GDPN) in an interview with DAILY POST in Abuja explained that the US deliberately denied the country of arms purchase to confront insecurity in Nigeria.

The former Intelligence Chief in the Nigerian Army said, the Army lacked modern equipment and training to fight insurgency and other forms of criminalities.

As the 2019 general elections draw close amid heightened insecurity, how do you intend to tackle insecurity differently from the way the current government is doing?

I am going to tackle insecurity from two major fronts which are going to be quite a departure from the style the present government is adopting.  Like I always say, we are going to tackle insecurity of terrorism in the Northeast, Nigeria.  I am going to have it from the domestic political economy and international political economy.  We are going to be looking at our military approach.  We are going to be strengthening our armed forces. We are looking at retooling and re-equipping our armed forces, changing our inventory to modern inventory that is required for the 21st century asymmetric kind of war fight.   Of course, as it is today, most of the insurgents are trained in modern-day fighting techniques. Terrorists use very modern armaments and so never in our history should terrorists be better armed than our armed forces and we should not allow ragtag army while terrorists are better equipped than them.  So when I become President, I am going to re-kit our army in tandem with the 21st-century requirements.

Terrorism anywhere in the world is not fought alone by the affected country, but it seems Nigeria is left alone fighting its own terrorists.  Other nations of the world are not interested in assisting Nigeria.  What do you think went wrong?

That is what I was talking about in terms of the domestic political economy and an international political economy.  If you look at the world today in balance of power situation in international economy, you will find that Nigeria happens to be disadvantaged.  Recall when President Barack Obama was in power and Nigerian leadership under Dr. Goodluck Ebele Jonathan asked for arms to be purchased from the United States, we were denied. We went to the United Kingdom to purchase arms, United States prevailed on the UK to deny us and they did.  We went to Israel, they denied, we went to South Africa they denied as a result of pressure mounted by the United States, so Nigeria went to the black market and the thing burst.  So it is important for Nigeria leadership to understand the interplay of domestic political economy and international political economy when it comes to seeking cooperation in the fight against terrorism.

So if you eventually become the president, would you be doing this immediately in order for the country to enjoy cooperation of other nations in the fight against terrorism.

Your foreign policy has to be astute.  Your degree and level of diplomacy have to be in a manner that attracts nations to your nation.  We have what we call not only member of international communities, but international non-governmental organisations which go a long way to ensuring that you have relationship  with other countries in the international arena.  All of these are within the ambit of international political economy.

What legacy would you be remembered for in the next 20 years after you have left presidency for instance?

Has President MuhammaduBuhari led government done anything good that is approved of you?

Ahead of 2019 elections, how do you react to the trend of vote buying by some politicians and how can this menace be tackled?

Is the Grassroots Development Party of Nigeria envisaging alliances with other political parties in order to deepen your base ahead of 2019 elections given the fact that  GDPN is presenting you as presidential candidate for the first time?

The problem of some political parties in Nigeria is somewhat lack of ideologies. As a new entrant into the political space, we have come with a very strong political ideology; we believe in our ideology and for us, it is a new thing altogether.  We have come into politics to play politics of 21st century;  politics of development.  Politics that would serve as a counter-culture to the existing political culture of underdevelopment.  Ours is about bringing a revolution into the political space.  We are an ideologically based party.  We stand by our ideology and we can align with parties that share similar ideology with us.

What actually do you think went wrong with this country that arouses your deep concern?

You are a young man and you may not know what happened in the past.  So many things happened.  We have experienced a trajectory of awkward experience and a downward slide in our social life and the economy.  The livelihood of an average Nigerian in an international arena has been on a downward spiral since the 80s to where we are now.  If you go through your history very well, you discover that we are not where we used to be. Indeed, we are throttling towards an abyss.  There is insecurity everywhere.  There is the inability of an average Nigerian to push his life forward and the lack of affordable accommodation everywhere in the country.  Massive unemployment with over 20 million people should give somebody like me sleepless nights.  That is a huge percentage.  With about 1.8million Internally Displace Persons (IDPs) in Nigeria as at today, that does not speak well of a country like ours.

If you ask me, ”when I become President, what will I like to do”  it’s like rebuilding Nigeria all over again.  We are haemorrhaging and bleeding in every area of societal life.  Now, my administration will be looking at restoring security of lives and properties of Nigerians so that they can sleep with their eyes closed.  Security is a primary responsibility of government as captured in the 1999 constitution as amended.

The other thing we are going to be looking at is education which is very key for me.  For me as an individual, I weep and I consider as a denial of fundamental human right of any citizen that is deprived of education.  When you talk about a country of 200 million people, we should be talking about 200 million highly developed minds and what I mean is with sound education.  Unfortunately, the percentage of illiterate people is within a neighbourhood of 60% of the entire population and this is not good enough.  The level of educated people is directly proportional to the development of that country.  When we are talking of building infrastructure, minds must be developed to maintain that infrastructure, if not, you find out that all your investment in that infrastructure will not be sustainable.  Education is key.  Educate a man and you have started the building blocks of a nation, because he will know how to comport himself, even, the consequences of population explosion.

The history of governance in Nigeria has been the history of protecting the interest of cabals than delivering dividends of democracy.  How would you strike a balance between these two as President?

They are cabals everywhere in the world.  In any power system, cabals exist.  But it takes the personality of any leader to break through any cabals.  It takes the vision, the tenacity and temerity to break through cabals that stand in the way of interest of the nation.   Who are those that stand in the way of a leader in the guise of cabals?  You are voted in as a president and you must not allow cabals to stop you from discharging your responsibilities.