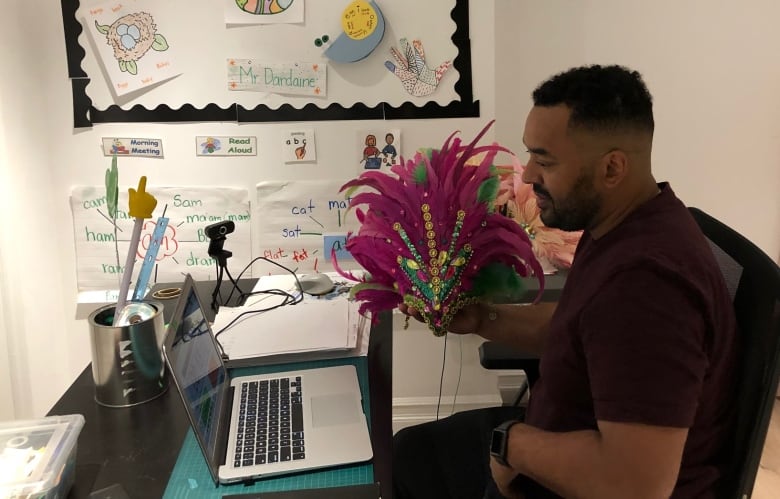 This story is part of a CBC News exploration of systemic racism, including anti-Black racism, and the promises for change made last summer.

The murder of George Floyd last year and renewed Black Lives Matter protests that followed underlined the need to tackle anti-Black racism, including in Canadian classrooms.

But how does this work with young learners? Three teachers share their approaches and why it’s important work for all educators to tackle.

When students see themselves, ‘they begin to thrive’

Each morning, Curtis Dardaine opens his class by playing a bit of reggae or soca music. It brings smiles to faces, invokes singalongs and gets students — his special education class includes kids from grades 1 to 3 — moving, he says. Sometimes the Toronto District School Board educator, who’s teaching virtually this year, might catch a parent or sibling joining along in the background, too.

“It just really brings joy into the classroom, that readiness for learning and [that knowledge] their learning environment is a special place and is reflective of their lived experiences,” said Dardaine, whose Caribbean heritage echoes that of some of his students.

Dardaine, whose family hails from Trinidad, says his anti-racist approach begins with being student-centred. He learns about his students and the things they enjoy before then reflecting that knowledge back to them as he teaches literacy, numeracy and other elements of the curriculum.

After one student mentioned having taken part in “Kiddie Caribana,” for example, he incorporated it into lessons. He showed off costumes his own children have worn during Carnival, read the Carnival-themed book Boy Boy and the Magic Drum and led a discussion that touched on grandparents, history and celebrating culture.

Jumping onto opportunities as they arise is another strategy. Recently, as Dardaine read a book that included the word “matter,” a six-year-old student declared: “Black Lives Matter.” Dardaine proceeded to ask students what the term meant to them and helped them find the vocabulary to voice their thoughts.

WATCH | When a 6-year-old mentioned ‘Black Lives Matter,’ Curtis Dardaine was ready to talk — and to listen:

When a six-year-old student noted that ‘Black Lives Matter,’ elementary school teacher Curtis Dardaine seized that opportunity to lead his primary-aged class in talking about anti-Black racism, Black excellence and the importance of their voices. 1:41

“My role is to really take some of those opportunities and to have those courageous conversations with my students and to talk about what it means to be fair,” he said.

Listening to personal stories of racism to teach empathy

Empathy is at the heart of Monica Noakes’s efforts in anti-racist education, with the goal of getting her students in Surrey, B.C., to imagine walking a mile in someone else’s shoes.

In one project, her students researched communities with strong populations of immigrants or people of colour — from Vancouver neighbourhoods like Strathcona to historic areas such as Africville in Nova Scotia — and created presentations about what it was like for kids to grow up there.

“It was important for them to understand that kids have more in common with each other than what separates [them],” said Noakes, who this year is teaching grades 5, 6 and 7 students in a blended online and in-person program.

Empathy also came into play in discussions of racism this year, when Noakes and some students shared personal stories. “Some of these kids have never heard how their peers had experienced certain things,” she explained.

“They’ve heard of racism, but having someone who they know having experienced it or me as their teacher telling them my stories of [experiencing] racism in Canada was very moving for them.”

Her work against anti-Black racism extends into the wider school community. She successfully advocated for more library space for books by Black authors about Black people.

In February, Saint Lucia-born Noakes and a colleague spearheaded a successful Black History Month initiative that highlighted achievements by Black people from across Canada, the Caribbean and worldwide.

As just one of two Black teachers at her school, however, Noakes says she believes all educators need to learn how to address anti-Black racism.

“It’s really important for us to find ways of delivering these conversations, because we’re not going to move the needle if we don’t.”

Students encouraged to create art from own perspective

Instead of announcing to young students, “Let’s make a snowman because it’s winter,” Halifax art educator Robin Jensen has shifted her approach. Instead, she might now begin with: “Let’s talk about winter from what you know.”

That’s because classes today may include both students from places without snow and those who have many winter family traditions, said Jensen, a fine art specialist with the Halifax Regional Centre for Education serving students from primary grades through Grade 12.

Jensen has moved past imposing traditional processes and topics she herself learned in school as she teaches students and aids fellow educators to integrate art into different subjects. Instead, she explores themes and encourages students to create from their own perspectives. “It honours the knowledge and understanding that the children have.”

As she introduces more Canadian artists who are Black, Indigenous and people of colour to both students and educators, Jensen also advocates the student-led approach versus emulation. When studying Mi’kmaw artist Alan Syliboy, rather than asking students to mimic his art, Jensen discussed Syliboy’s work, his use of paint and his techniques before calling on them to tell their own story through those techniques.

“It becomes about the process of making art,” she noted. “The kids can see [that] something worth celebrating is that each person has their own perspective.”

As a white educator of mixed European heritage, Jensen says truly tackling racism can be an uncomfortable journey with “layers of unpacking and unlearning and shifting of focus.” When first introduced to culturally responsive teaching years ago, she noted that her initial reaction was resisting the idea that she was racist.

WATCH | What pushed this teacher to tackle anti-racism? Her students:

Roben Jensen says tackling anti-Black racism can be an uncomfortable journey for white teachers, but focussing on what students need is what drives her to do the work. 1:24

“That’s a part of the journey that a lot of white educators are on: that initial hurdle of understanding the complexity of that term and that concept,” Jensen said, adding that some white teachers might subsequently struggle with feelings of shame or fear of doing “the wrong thing.”

However, at this point in the anti-racism, Black Lives Matter discussion, Jensen says she’s optimistic that more teachers are understanding that their action is needed.

“It’s no longer about ‘my feelings.’ It’s not about ‘my reaction.’ It’s about: ‘What can I do to make a change in the system that hasn’t changed in 100 years?'” she said. “I can’t change the system myself as an individual … but I can effect change in my classroom.”