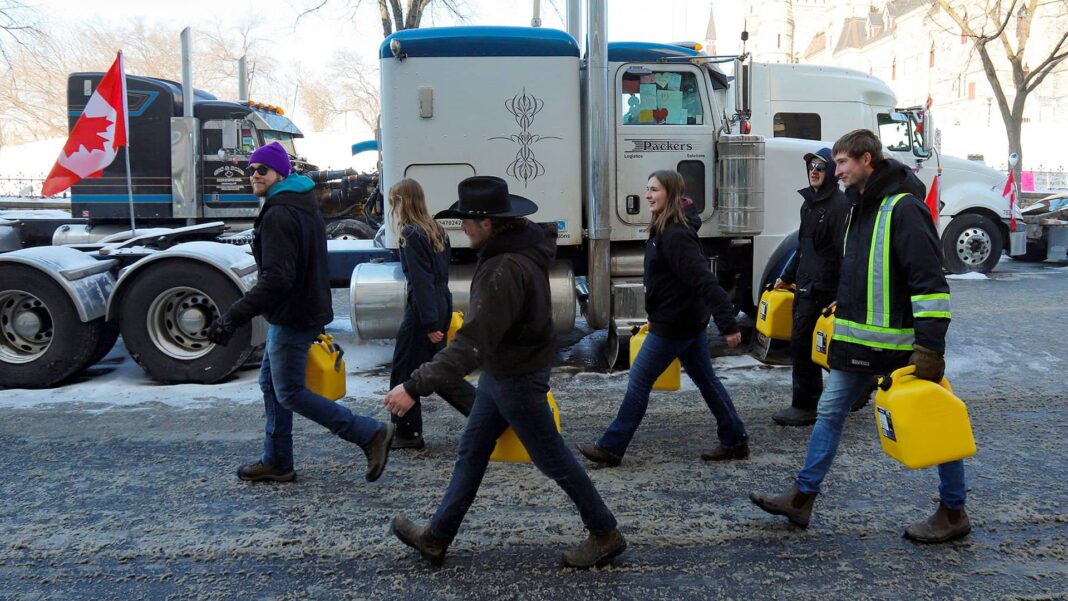 For nearly two weeks anti-vaccine mandate demonstrators and their big rigs have entrenched themselves in Ottawa’s parliamentary district and its neighbourhoods.

Despite a strategic strike by police to cut off supplies to truckers encamped in the city’s downtown core, protesters appear to still have the upper hand on police.

It’s a success that experts partly attribute to the deep knowledge of law enforcement and military tactics that exist in the convoy’s organizational structure.

WATCH | How convoy protesters are staying ahead of police in Ottawa: 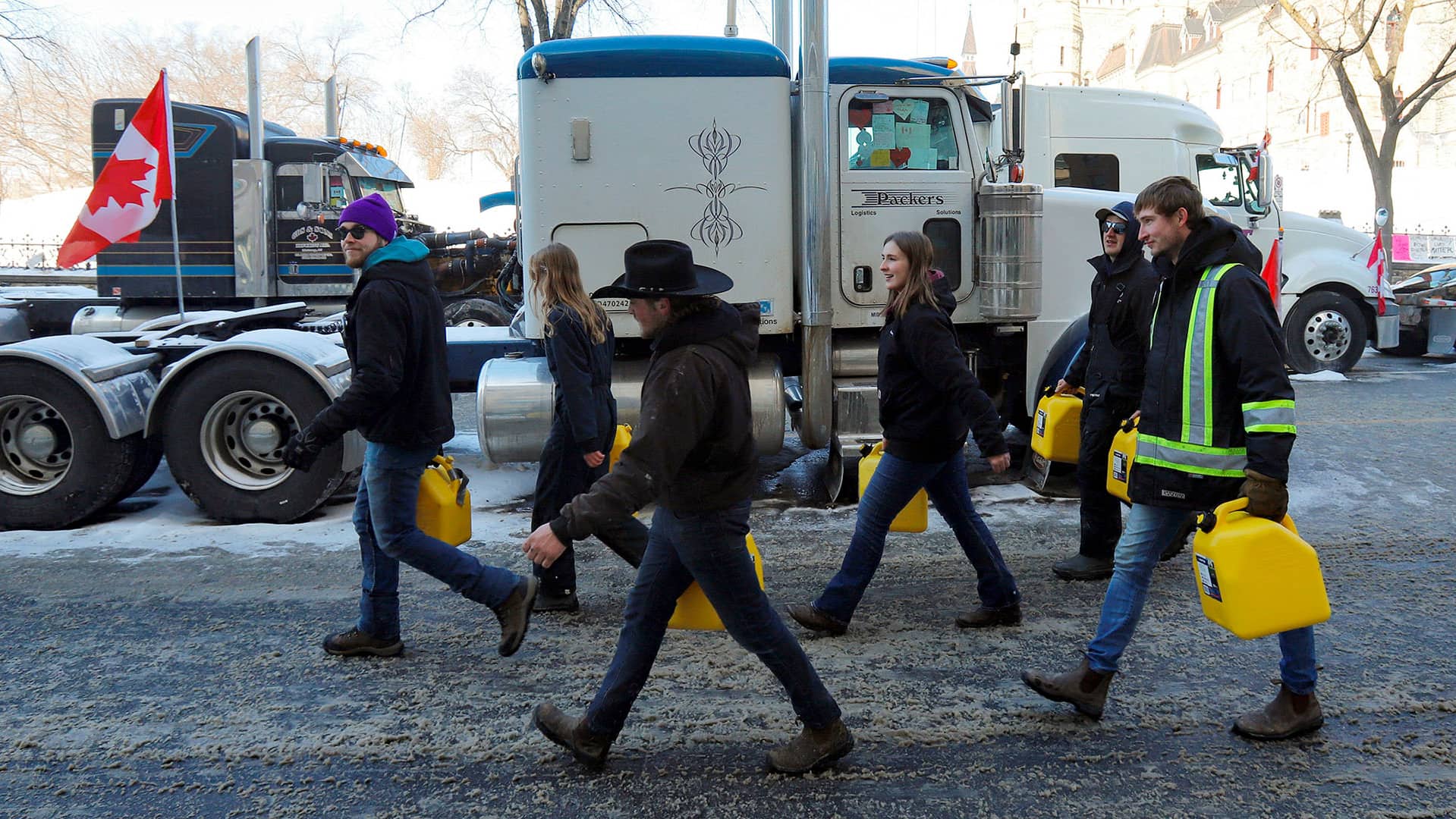 Why Ottawa protesters seem to be a step ahead of police

Experts say the presence of former police officers within the ranks of the Ottawa protesters is giving them a tactical edge over local law enforcement. 3:22

The group Police on Guard, formed during the pandemic, has endorsed the truck convoy. On its website it publicly identifies more than 150 mostly retired police officers who are against government imposed emergency measures such as vaccine mandates. More than 50 former Canadian Forces soldiers are also named on its site.

The organization says it has “boots on the ground” in Ottawa and has linked to YouTube videos of its members participating in the protest.

Furthermore, the leadership team for the protesters calling themselves the Freedom Convoy includes:

The leaders of the Freedom Convoy refuse to be interviewed by journalists unless they consider them friendly to their cause, and CBC News has been barred from their media conferences. In a video posted from one of those news conferences posted on social media, Quiggin gives his assessment of the political and police response in Ottawa which he calls “the opposition.”

“I would say the opposition at this point doesn’t actually have a strategy. They have a sort of weak goal and that they want the streets cleared, but they have no real idea how they want to get there,” he said.

During his tenure at the RCMP, Quiggin was a member of the Integrated National Security Enforcement Team (INSET), which was created to thwart terror threats following 9/11. At INSET, Quiggin worked alongside top officials at CSIS, Canada’s spy agency, the Canada Border Services Agency (CBSA) and municipal police forces.

In that same video, he referenced the blockades at the border crossing in Coutts, Alta., and parallel protests in Toronto, Quebec City and Sarnia.

“I think what we’re going to see is people start going to the government and saying ‘Get this fixed.’ And if you don’t, we’re realizing that we have the power to shut things down,” said Quiggin.

While speaking in the video, Bulford bragged to the select reporters about his close relationship with RCMP, the Parliamentary Protective Services, Ottawa Police and Gatineau Police. He urged demonstrators to stay “peaceful” and connect with officers on patrol.

“[Police] all know that this group is here for everybody, and I make a point of saying to other police officers, when I see them, it’s like, ‘Just so you know, in my mind and in my heart, we’re doing this for all of you as well,’ ” said Bulford.

Police have not commented on any conversations they may have had with either Quiggin or Bulford.

Michael Kempa, a University of Ottawa criminology professor, says the convoy’s policing and military expertise can be seen in the co-ordination of its downtown occupation.

“They have this sort of military or police or at least survivalist training. Look at the sophistication of what they’re setting up in terms of an encampment in downtown Ottawa,” says Kempa who studies policing across Canada.

As examples, Kempa pointed to the tents and wooden structures used for kitchens and the supply chain that has sprung up across the city to keep people fed, working and protesting.

Kempa says police made the “grievous error” of permitting transport trucks to drive up to the gates of Parliament Hill.

Police have called those heavy trucks potential weapons, but they are also essential tools used to transport supplies such as two-by-fours to build shelters, firewood and burn barrels to keep protesters warm and propane tanks for barbecues.

In the core, abandoned cars and trucks with their tires removed are blocking streets. To Kempa, the placement of these vehicles is not random but rather strategic in that they may prevent police infiltration.

Residents have noticed protesters taking shifts getting into the cabs of idling trucks to blare air horns. The ear-piercing sound rang out at all hours, until a court injunction earlier this week forced a temporary pause.

Ottawa Police say there are currently more than 400 trucks parked downtown and they can’t move them because tow operators with city contracts are refusing to help. Making matters even more difficult, police say families with children are sleeping in approximately a quarter of them.

“These are not your average protesters,” Kempa said.

But perhaps the best example of co-ordination can be found at the logistics camp set up by protesters just six kilometres east of Parliament Hill at the RCTG baseball stadium on Coventry Road.

The Titan baseball team’s owner Regan Katz says the city asked him if they could use the lot for temporary parking for some of the trucks to alleviate congestion in the core. Police told him they would only require the lot for one weekend, but the truckers never left.

Instead they set up a supply centre.

At the Coventry camp, there are several canopy-style tents set up and two tractor trailers stocked with food, along with rows of portable toilets.

When shipments of diesel, gasoline and propane arrived, volunteers would transfer the fuel into hundreds of red and yellow jerry cans that would be driven downtown to be distributed to truckers so they could keep their vehicles idling.

With temperatures in Ottawa that have, at times, dipped to –30 C, at least three saunas were trucked in so protesters could stay warm.

On Sunday evening, as demonstrators were gathering for dinner, dozens of officers, some carrying riot guns capable of launching rubber projectiles and tear gas, raided the camp. In an attempt to cut off the supply route, police say they seized 3,700 litres of fuel and two vehicles including a diesel tank.

But within hours of the raid, protesters from the camp broadcast a reassurance to their supporters.

“People are still in high spirits. Donations are still here. Fuel is still here and it will still get to the truckers,” said demonstrator Terence Rowland-Dow, in a Facebook live stream.

The day after the police raid, protesters continued to deliver fuel to downtown truckers as they executed a co-ordinated effort to exhaust police resources. Demonstrators pulled wagons full of jerry cans past officers who just watched.

Ottawa police Deputy Chief Steve Bell said demonstrators were “filling gas canisters with water to distract officers … attempting to subvert our efforts.” He said one officer was swarmed while trying to confiscate fuel.

Queen’s University professor Amarnath Amarasingam researches radicalization and extremism. He watched the Facebook live stream after the raid and was impressed by the level of co-ordination he saw. He believes police miscalculated the resolve of the convoy protesters.

“If anyone was paying attention to the online content … leading up to this convoy — they shouldn’t have been underestimated.” Amarasingam says protesters had consistently telegraphed their intentions to dig in on social media.

He believes police initially placated protesters because they prepared for the wrong outcome and assumed they would engage in overt violence.

Instead protesters broke many bylaws such as public urination, defecation and intoxication and refused to wear masks. But for the most part their actions didn’t cross the line into criminal acts and resulted in fines, but not jail time.

“The (police) approach was — are they going to storm government? Or are they going to do something exceedingly violent? I don’t think that was necessarily their objective from the beginning,” Amarasingam said. “It was more so to cripple the city.”

He says the convoy also has the means to continue their operation indefinitely. Since GoFundMe cancelled their initial fundraiser, they are aiming to raise $16 million US on Christian crowdfunding platform GiveSendGo and are more than halfway there.

Unless there’s an internal collapse of the organization, Amarasingam worries it will end in violence.

To date police have made 23 arrests, issued more than 1,500 tickets and launched more than 80 criminal investigations. Bell called the remaining demonstrators “dangerous and volatile.”

Police say they need 1,800 more reinforcements from the federal and provincial governments to help end the crisis.

New protest camps are springing up across the city in shopping mall parking lots and near the access road to Ottawa’s international airport. As another weekend approaches, the crowd on Parliament Hill is expected to swell again.

Meanwhile, American media have arrived in the capital, the convoy has also spawned copycat protests in other parts of the world and the crisis is expanding far beyond Ottawa.