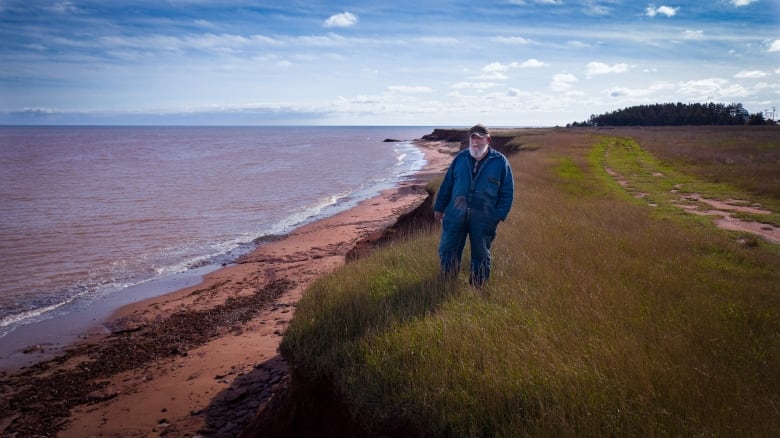 Joe Dorgan’s phone doesn’t stop ringing these days, as people around the world hear about his company’s cattle feed made from seaweed and its potential to reduce methane emissions.

Dorgan says the United Nations climate change summit has sparked renewed media interest, including a news crew from the U.S. that visited the plant in Seacow Pond, P.E.I., in October.

There is also new interest closer to home.

One of the recommendations made by P.E.I’s all-party special committee on climate change in May 2021 was that the province promote the addition of seaweed into cattle feed, which has been shown to decrease methane emissions from the animals.

Dorgan began feeding seaweed gathered from nearby beaches to his dairy herd, as a natural mineral and vitamin supplement. He established North Atlantic Organics with some business partners in 2007.

A major breakthrough came in 2014, when agricultural scientist Rob Kinley tested the North Atlantic seaweed mix and discovered it reduced the methane emissions by about 20 per cent.

“That meant an awful lot to our business,” Dorgan said.

“It makes them get more use out of their food, and they’re not burping and farting as much methane into the air. That’s a simple way of putting it.”

Seaweed products for animals are now being developed around the world, meaning North Atlantic Organics has some stiff competition.

Dorgan said he was pleased to hear about the provincial government’s interest in seaweed feed.

“The best news that I could ever hear because it makes a lot of sense, and it’s the way to go,” he said.

“Everything is storm-tossed. We’re good for the environment in every way. There’s nothing harmed. We don’t go out and drag it off of the ocean bottom.”

Dorgan said North Atlantic Organics employs between 60 and 65 people over the course of the season, including about half a dozen in its production facility.

He said his company could scale up, if demand increased, with a bit of help.

Dorgan said they need a bigger production building, as well as a special dryer, similar to ones that were used for Irish moss.

“It doesn’t hurt to leave it spread out over winter, and dry it in the spring. But we need product.”

Dorgan said he would like to see the P.E.I. government offer farmers subsidies to purchase feed made with seaweed.

“They’ve got to talk to the farmers, all the animal producers on our Island, and say, ‘This is the way for you to do your part,'” he said.

“The government, they have a role to play. They don’t need to get involved in the everyday work of it. We do the work, but maybe subsidize the farmer if he’s buying the product from our company.”

Kent Rennie, a long-time customer of North Atlantic Organics, has been feeding the seaweed to his herd at Dock Road Dairy in Alberton since Dorgan started.

He said he started using it for the health benefits for his cows, who also like seaweed’s salty taste.

The reduction in methane emissions, Rennie said, is a bonus to an industry that has been taking some blame for greenhouse gases.

“I don’t know if the cows deserve that. They’ve been here for tens of thousands of years, and here humans are blaming them for climate change,” Rennie said.

“Maybe can develop a solution so that they don’t have to be blamed for something that we’ve done.”

As for his cows?

“I think that’s mostly where it comes from, is the belching, and can I say they belch less? I can’t tell you that for sure, but the science has proven that it does aid in reducing that methane production.”

Rennie said he would like to see the P.E.I. government explore carbon credits as a way to encourage more farmers to use the seaweed product.

“If the government can help organize that or develop that, that’d be a great way to go,” Rennie said.

“It could be a little money, maybe, in some farmers’ pockets to help make a difference.”

‘Time to get serious’

Dorgan said the company is doing research into some new value-added products using the seaweed, including a liquid and flour made from the seaweed powder.

“It’s real good to see the interest into it, because it’s showing that somebody is starting to get serious,” Dorgan said.

Dorgan said he’s hoping to hear soon what the P.E.I. government is planning when it comes to getting more seaweed feed to Island farms.

“Talk is cheap. But it’s time to get serious and really work on it,” Dorgan said.

“We don’t have to go somewhere else to be doing something about it, we have the product right here. We got the people that know how to do it. We have everything right here. Let’s work with it.”