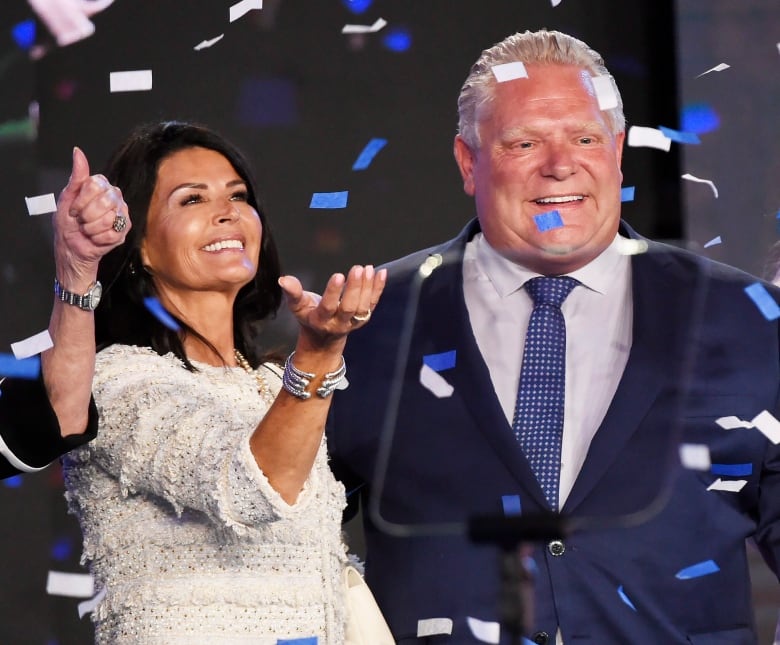 When the Ontario Progressive Conservatives took control of the province in 2018, much of the credit for their victory was given to the former Liberal government’s unpopular leader.

Now, with current polling showing the Tories in the lead as Ontarians prepare to vote on June 2, Lyle said that “the size of the victory that we see at the moment, which may not last, is due to him.”

Indeed, unlike his first two years in office, where he was a definite liability, says David Coletto, CEO of Abacus Data.

“Doug Ford went from being the least popular premier in Ontario before the pandemic, to being kind of in the middle, to right now, based on our polling, he’s the most popular [provincial] leader in the province,” Coletto said.

“Today, there’s no doubt he’s an asset in which a significant number of people who may not normally vote Conservative — if these trends continue — will likely vote Conservative because Doug Ford is the leader of the party, not despite that he is,” Coletto said.

Moved on from the pandemic

This is not to say that Ford is beloved across the province or that he doesn’t have a significant number of detractors. There are still large swaths of Ontario voters who don’t support the PC leader — many who may still be angered by his handling of the COVID-19 crisis. Yet there are also those who offer praise for him, analysts say, and, more importantly for Ford, have since moved on from the pandemic to other issues.

With most people in Ontario vaccinated and cases falling — and perhaps many resigned to live with COVID-19 — “people have short memories. We’ve kind of collectively moved past the pandemic,” Coletto said.

“And so while there were times throughout that he made decisions or did things that really upset many people, at the end of the day, I think people, even in our polling, say he did OK at managing the pandemic. It wasn’t for enough people a disqualifier.”

Instead, the electorate now sees “a world where cost of living and inflation and interest rates are really creating, I think, a significant amount of anxiety for people,” Coletto said.

“Doug Ford and the PCs — when we asked people who do you think is best on those issues — they’re well ahead.”

As the four major political party leaders prepare to square off on Monday night in their final debate, CBC’s own Poll Tracker has the PCs on track to form another majority government. But the situation that Ford and his party find themselves in now is a far cry from just over a year ago.

Initially, Ford, like many other leaders, saw this popularity numbers soar in the early months of the pandemic. But eventually the Tories were criticized for imposing too many restrictions by some, too few by others, and accused of not having a plan.

In April of last year during the third wave of the pandemic, Ford introduced a series of unpopular policy initiatives that included new policing powers and shutting down playgrounds. Following a public outcry, those policies were reversed, but they helped feed a narrative of an aimless government.

The impact was immediate. Lyle’s Innovative Research Group found that satisfaction with the government’s handling of the pandemic slipped five points before and after the announcement of the new restrictions and that Ford’s own personal numbers fell.

Indeed, Lyle himself penned an article at the time under the headline: Is this the beginning of the end for Doug Ford?

“Almost everyone likely to vote in the next election is watching Doug Ford now, and most of them do not like what they see.”

However Ford was able to rebound, in part by offering a public apology for some of the measures, Lyle said.

As his numbers slowly crept up, they hit another snag in January, as the government seemed to be struggling to find the right balance on lockdown measures. Many parents were left frustrated by school closures, while Ontarians decried  shortages of rapid COVID-19 tests.

Again, however, Ford was able to pivot and rebound, with polling showing, according to Lyle, that many Ontarians felt that changes the government made related to public health restrictions simply reflected the evolving nature of the coronavirus.

“It’s important to understand that, in terms of issues and events, the public looks at them as character tests, not policy exams,” he said. “It is important not just to do well, but to mean well. And enough Ontarians feel Ford did his best for the right reasons that he is now poised for re-election.”

Lyle believes that Ford got credit by not being stubborn or ideologically tied down to one policy path.

“A lot of politicians, having made a shift, then would have felt they have to stick with that. Whereas he went, OK, well, you didn’t like that either. Fine, we’ll change again,” Lyle said.

“A lot of people would say, well, that just proves he didn’t really know what he was doing and he’s lurching from one position to another. Yeah, but a critical number of voters say, well, that shows this guy listens. he cares what I think.”

Lydia Miljan, a political science professor at the University of Windsor and a senior fellow with the Fraser Institute, said Ford has also been able to portray himself as a much more moderate politician than some may have expected.

“They thought he was going to be a slash-and-cut Conservative premier, and he was nothing like that,” she said. “This last budget is the biggest we’ve ever had.

“And he’s actually shown that he knows how to co-operate with the federal Liberal government,” Miljan said. “He has a much better temperament than people probably would have given him credit for.”

Kate Harrison, vice-chair of public affairs firm Summa Strategies, said Ford is also benefiting from a weak opposition. She said people have now had a chance to get a good look at NDP Leader Andrea Horwath to see whether she’s the right alternative, “and the polling suggests they’re not biting this time.”

As for Liberal Leader Steven Del Duca, “Nobody really at this stage thinks he’s going to have a surprise come-from-behind victory,” she said.

Coletto of Abacus Data said its polling shows that most Ontarians believe their life — including the quality of education and health care — either won’t change or will be better if Ford is re-elected.

“And to me, that’s an important indicator that the opposition parties haven’t created in enough people’s minds a fear of a re-elected Doug Ford,” he said.

As well, Ford’s success at retail politics shouldn’t be discounted, said the University of Windsor’s Miljan. Small initiatives, such as sending refund cheques to Ontarians for their licence plate sticker renewal, goes a long way, she said.

“I think that that one of the risks that other politicians, especially on the left, have is that they denigrate that and … say it’s being small-minded. But that loses the votes.”

Ford, as well, seems to be able to convince voters that he’s the best leader to create opportunities being sought by a struggling middle class, Lyle said — and that when people are asked which leader is most likely to deliver change to benefit them, Ford wins on that question.

“That’s the incremental edge that he’s giving the Tories in this election campaign,” Lyle said. “I’ve been watching or doing politics since 1981, and I cannot name another leader that’s been premier for four years and been able to run as the best on change.”