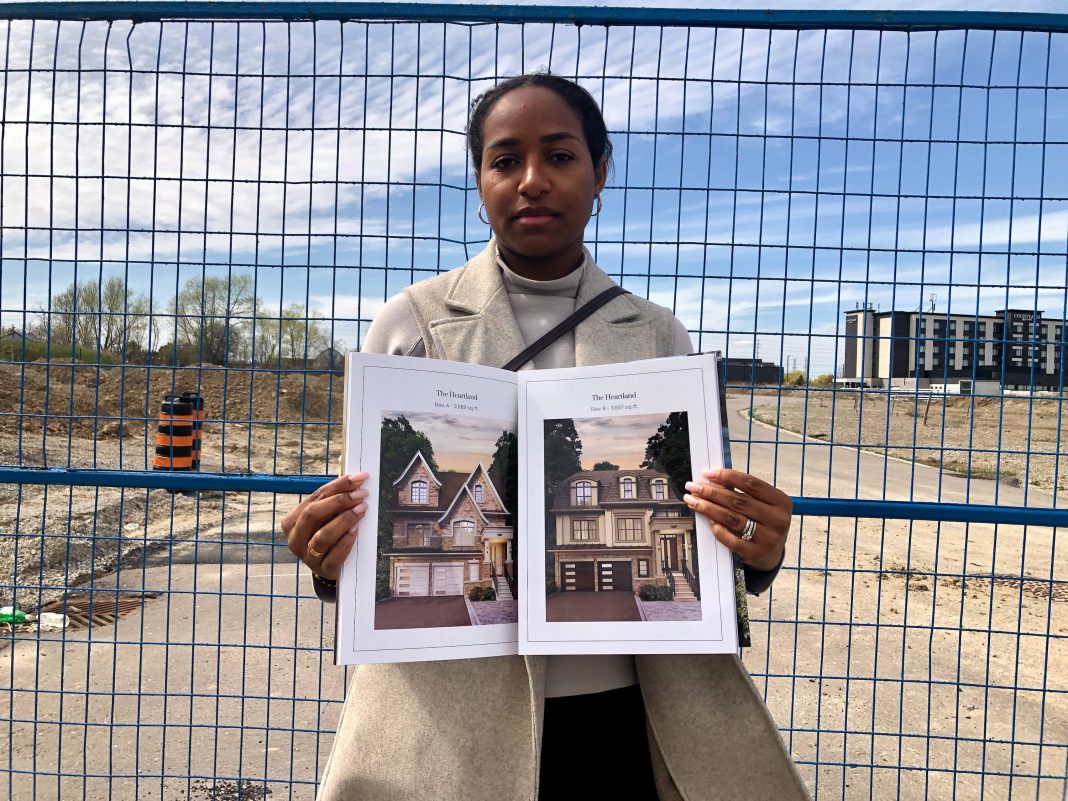 When he put a deposit on a pre-construction home with an in-law suite in a new housing development in Mississauga, Ont., Jawed Yusuf thought his dreams of buying a house big enough for his family — and for his father to come live with them from Pakistan — were finally coming true.

It’s been almost three years since he put the money down, but today, the project has been cancelled and the builder says it’s keeping his $150,000 deposit — unless Yusuf agrees not to sue.

Meanwhile, he and his family have no new home to move into, and his aging father remains in Pakistan.

“We have been planning for so long for this,” Yusuf said through tears. “It’s an honour for us when our parents live with us.”

In 2019, Yusuf paid a deposit on a home in Longview Ravine Estates — a 45-property development by Exquisite Bay Development Inc., also known as Bay Homes. The company billed the site as a luxury development of detached and semi-attached homes that backed onto a ravine in north Mississauga.

But the project went sideways, and last month Exquisite Bay sold the land to a different developer.

Buyers told CBC News they were never notified of the sale or the fate of the project; instead, they received letters, dated Apr. 11, 2022, from Exquisite Bay stating that they were in violation of their purchase agreements, and that the company was keeping their deposits unless they agreed not to take legal action.

The letters contained no mention of the sale or the cancellation of the project.

“It feels like they’re holding our money hostage,” said Kerrese Predovich, who also signed on in 2019 and expanded her family with the expectation of moving into the new house.

“It feels like they’re holding our lives hostage. For the last three years, we’ve just been waiting.” 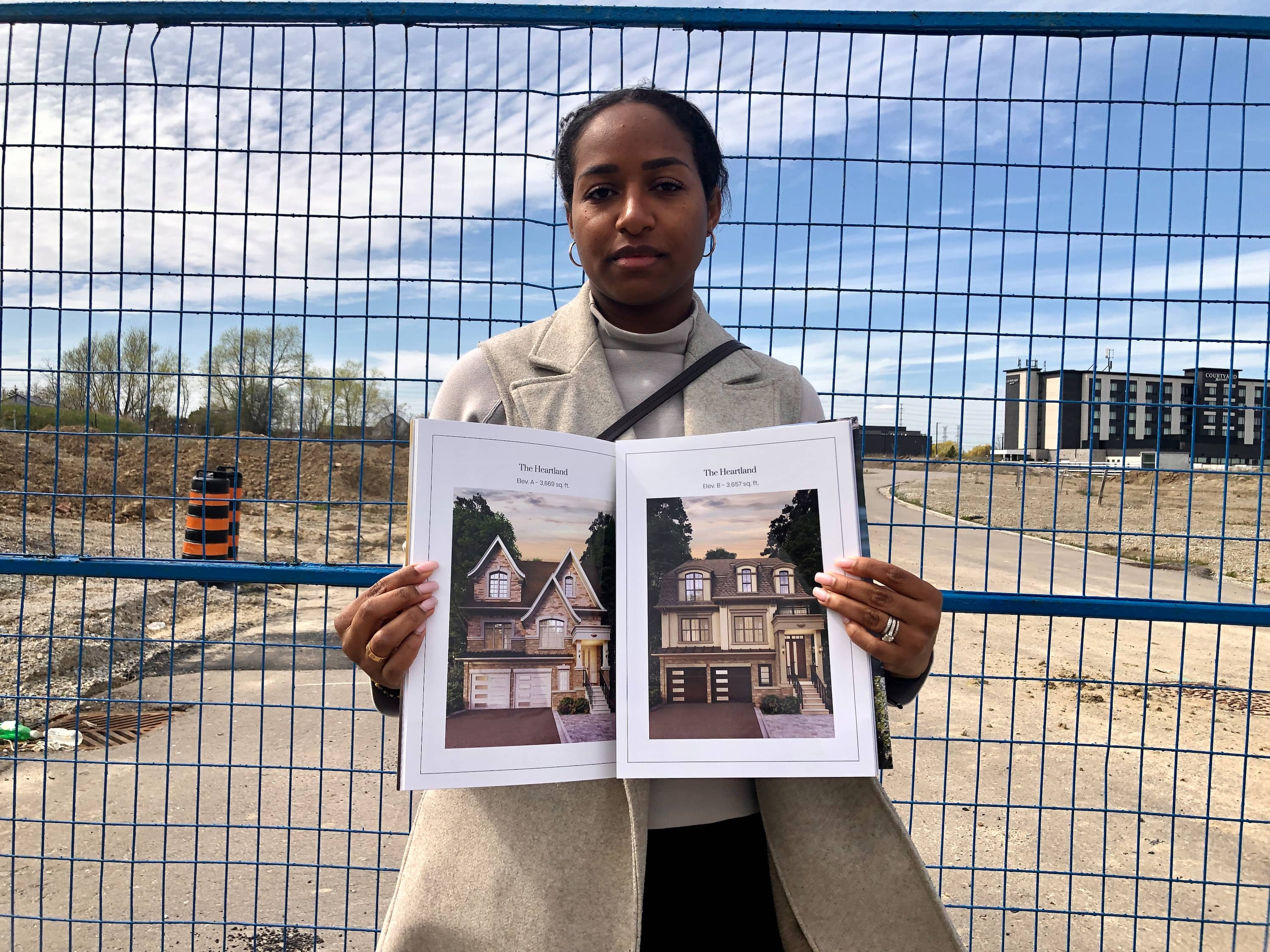 CBC News spoke with half a dozen people who are part of a group of approximately 30 buyers who’ve banded together to try and figure out what to do next. While Exquisite Bay has maintained all of the buyers violated their purchase agreements, the buyers disagree.

“Why are they blaming us? What do we do? How do we get another house?” Predovich said. “We’re priced out of the market because we bought our house three years ago.”

In a statement, Exquisite Bay president Ahmed Yousuf said the company was unable to proceed with the project “because of circumstances beyond its control, including servicing delays, cost issues and inability to maintain construction financing.”

Yousuf said the vast majority of purchasers in default of the sales agreement did so because they didn’t provide the company with the proper mortgage commitment documentation.

The buyers have said their financial paperwork was approved by the company and its sales agents. They point out the sales agreement states that after the initial period of signing, they had 14 days to provide supporting documents upon demand. But Exquisite Bay didn’t bring up any issues with their financing until last month, they say, in the letter that terminated their agreements — three years after they signed and when the project had already stalled.

“It really was like a punch in the stomach,” Predovich said.

Exquisite Bay’s Yousuf said other buyers are in default because they put their houses on the market, which also violated the purchase agreement. One couple received a letter from Exquisite Bay saying they’d listed their house for rent online, but the couple has said they didn’t try to rent out the house — it never got built.

All purchasers were asked to contact the company’s lawyer and those who did have been offered their deposit back, plus six per cent interest for each year, Yousuf said. But in order to receive it, buyers have to sign an agreement promising not to take legal action.

He also said that some buyers have agreed to the terms.

But both Predovich and Yusuf have said they’re weighing their options. They want the builder to “do the right thing” and return the deposit without strings attached.

“Our mental health and our financial situation has been negatively affected, so I don’t plan on just agreeing to their terms,” Predovich said.

Construction delays dragged on for years

Exquisite Bay began marketing Longview Ravine Estates in 2018 and, according to the company’s social media, construction was “in full swing” in January 2020, despite not having all of its building permits at that time. The project sold out by September 2020.

In March 2021, the company’s request to renew its builder and vendor licence was refused, according to Ontario’s Home Construction Regulatory Authority (HCRA). The HCRA said it can’t disclose the reason for that unless the matter is appealed, which Exquisite Bay didn’t do.

Exquisite Bay didn’t answer questions on the record relating to its licence.

Just weeks after its license renewal was refused in March 2021, the company issued a letter to buyers, delaying their closing dates from July 2021 to November 2021. But Nov. 1, 2021, came and went.

Then, Exquisite Bay sent a letter, dated Nov. 9, 2021, saying servicing of the land was finished. It also promised buyers that construction would start soon, as the company was in the process of obtaining building permits.

“I was full of anxiety,” buyer Afzal Chowdhury said. He and his family had been driving by the site regularly over the last three years, eagerly waiting to see if any progress had been made.

“We really didn’t know what their plans were. We repeatedly asked and they just kept giving us hope.”

Yousuf, in his statement to CBC News, said: “We are and have been acting in good faith and in an honourable manner in a difficult situation.”

Mark Morris, a real estate lawyer who is not involved with the file, said pre-construction sale agreements are written in favour of developers and buyers are “at the mercy” of their competence.

He said whichever party wins next month’s provincial election should enact better buyer protection for pre-construction sales, including legislation that enforces a fixed purchase price and that allows buyers to register their sales agreement against the land the property is supposed to be built on.

“I wish one government would step up and actually assist those parties who are going forward with the biggest purchases of their life so that they don’t end up in this exact scenario,” Morris said.

Exquisite Bay bought the land in Mississauga, Ont., for just over $21 million in 2018, according to real estate documents, and sold it for $38 million to Vandyk Properties last month.

In a statement, Vandyk’s vice-president, managing director of real estate Sherman Chan, said the company is keeping the project intact and won’t be making any drastic changes.

He acknowledged Exquisite Bay’s buyers are in a difficult situation, and said Vandyk will be looking at providing them an advanced opportunity to buy in its development, “in hopes of ensuring that they’re heard and acknowledged.”

But Yusuf, Predovich and Chowdury all said even if they agree to Exquisite Bay’s terms and get their deposit back, they likely can’t afford the new homes in the current housing market.

All three said that while they understand projects don’t always go as planned and costs can increase, they wish Exquisite Bay had been more transparent when things started to go awry.

“Why didn’t the builder speak with all the buyers? Maybe there might have been a better solution than this,” said Yusuf.