How Do I Keep My Teenage Son from Getting Addicted to Gaming? 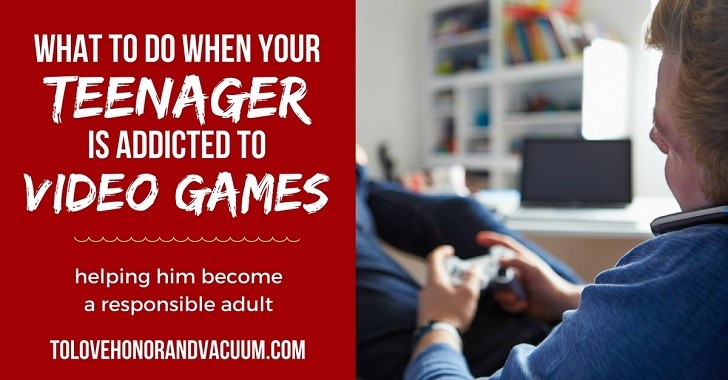 The average age of a gamer is now 31.

Ten years ago that was not the case. But as video games are becoming a part of more and more teens and children’s lives, we’re just going to see video games become a bigger part of adulthood, too. So it makes sense that I’m getting more and more emails and comments from women frustrated that their husbands play too many video games.

I’ve written in the past about steps you can take if your husband plays too many video games, but we haven’t talked much about how to help prevent unhealthy gaming habits in the first place. My daughter Rebecca is handling this one today, as her husband is a gamer and I thought the two of them could add some helpful insight into this conversation!

My husband is a gamer.

He loves it. When we were dating he lived with a bunch of other guys who all gamed, too. They all shared Connor’s PS3 and had a bunch of games for the house and it was a lot of fun. Now that Connor’s moved out, they still play online together.

Something that I’m grateful about Connor, though, is that gaming isn’t a problem for him. When he was in university, he studied, got his work done, and gamed during his breaks. Now that he’s working full-time, he gets up early, goes to work, comes home and then turns on the console. He doesn’t let it control his life.

That’s not always the case with men, though. And often the problem starts in high school. So what can parents do to help their kids have a healthy relationship with gaming? Here are three things to keep in mind:

Understand WHY Kids Like Gaming, and Use it to Your Advantage!

A problem that I had when we got married was understanding that gaming is not bad. I’m not much of a gamer. I have a few games that I like and can play for hours on end, but for the most part I’m a knitting and Netflix kind of gal. So when I saw Connor choosing to play video games in his free time, I tended to think, if I’m honest, that it was immature.

But I needed a serious reality-check.

Like I said, Connor wasn’t being immature about gaming at all. He gamed after he got the important stuff done. He just liked video games! And he liked them for good reason, too. He explained to me that with a good game, you get engrossed in the story-line. You have goals to complete, it’s exciting, it gets your blood pumping, and you feel like you’re really accomplishing something, even if it’s only in that game’s universe. And to me, that makes a lot of sense. To be honest, that’s a lot of the reason I knit! (Ok, maybe not the blood-pumping part.)

If you’re worried about your child playing too many video games, I urge you to ask yourself these two questions:

Understand that people like video games for a reason. You might not understand it, but that doesn’t mean it’s not a legitimate thing to enjoy. So instead of trying to stop him from liking video games (which is extremely unlikely to happen anyway), start using his enjoyment of games to your advantage.

Here’s what my husband said about helping a teenager who loves video games learn some responsibility:

People like concrete, visible achievements. It feels good–you get a medal. If you can set up tasks that they need to accomplish in a way that there’s achievement and rewards, you’re shaping their life in the way that they personally find gratifying.

In the workplace, I have a stack of papers that I need to get through. Every single paper that I do is one paper closer to that stack being gone. I can watch the stack disappearing before my eyes. That’s a concrete achievement-oriented task. The kind of stuff I hated growing up was knowing that my parents could call me out of what I was doing to do a house chore without knowing if there was anything else that was coming next. What worked, though, was having a checklist that I could power through. If my mom came to me and said, “here’s everything that needs to get done today” I didn’t mind. Again–it was a concrete, achievable goal-oriented task.

If your kid loves video games and you’re concerned he’s not taking any real responsibility in his life because of it, use progress checking like what Connor said to help teach him responsibility and the importance of getting work done. Progress checking teaches kids how to make their lives more goal-oriented on their own, as well.

Teaching them how to find a finish line that they can work towards will help them both become responsible adults and find meaning in even mundane tasks.

Worried your kid is addicted to video games? Here are three tips to help!Click To Tweet

If you’re worried about how much time your kid spends playing video games, the first thing to do is to put all gaming items into a public place. For my husband’s family, the gaming console was in the living room. Connor’s mom could call out, “Hey, you’ve been gaming for over an hour now. It’s time to turn it off,” and Connor couldn’t exactly sneak in more gaming time without his mom knowing.

Keeping laptops, computers, and gaming consoles in a family communal area lets you know what your kids are doing and when they are doing it. Having a family desktop computer instead of multiple personal laptops may help with this, as well. It adds some accountability, as teenagers aren’t always the best at self-regulating, and also keeps you involved so that you can monitor their gaming use to make sure there’s nothing overly graphic or inappropriate going on in the games your kids are playing, too.

Watch How You Spend Your Time

What I’ve seen in a lot of families is the parents are angry and in arms about video game usage is that their family often wastes a lot of time–just not on video games. If you’re mad at your kids for playing five hours of video games straight, but then you watch 5 hours of Netflix on a Saturday, that can seem pretty hypocritical to a kid. Harsh, I know, but it’s a conversation I’ve had with lots of friends. It’s also one that Connor and I had to have–he pointed out that it was unfair for me to get mad at him for playing video games for less time than I spent on Instagram, Pinterest, Netflix, and Facebook in a day. Sure, I may have been on four sites, but we spent the same amount of time goofing off. And he was right!

So what I suggest is to talk with your kids. Explain “I’m worried about the patterns of time use in this family. I’m worried that how much time you’re spending on video games is going to make it harder later in life for you to be able to do well in college/get a job/have a good marriage, and I’m worried that I’m spending too much time goofing off in unhelpful ways, too. I would like it if both of us got to be more productive with our lives, and here’s how I’m going to start.” Then set boundaries together to figure out what’s a reasonable amount of time for your kid to be spending gaming.

Like with everything I write, I just want to urge you, as parents, to understand your teenagers are people, too. Don’t just brush them off as kids–really talk to them. Explain your concerns. Explain that you want him to be the kind of guy who is ready to take care of a family someday, but right now he isn’t taking care of himself because of how much he’s gaming. That’s an OK thing to say to a teenager–it’s treating them with respect. Say it with grace and love, of course, but don’t be afraid to treat them like an adult. They’re becoming one quickly anyway.

Have you dealt with gaming addiction or unhealthy gaming behaviours in your family or your marriage? Let me know in the comments below!