How anti-vaccine mandate protests pose a risk for Doug Ford 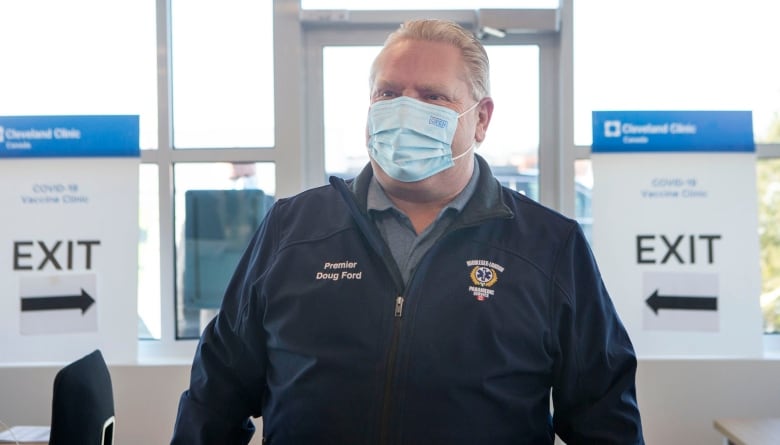 Ontario’s hands-on premier has taken a hands-off approach to the week-long protest that has snarled downtown Ottawa, the second-largest city in his province.

How will that change if something similar happens in Toronto?

Demonstrators are set to converge on the legislature on Saturday in support of the Ottawa protesters. Premier Doug Ford appears to be crossing his fingers that they don’t bring anywhere near the level of disruption as experienced in the downtown of the nation’s capital.

“I just hope it’s always a peaceful protest,” Ford told Hamilton radio station 900 CHML on Thursday morning, when asked about what Toronto police are calling a planned demonstration. “If people want to come down and protest, God bless ’em. I understand their frustration. I really do.”

It’s significantly different from the way Ford reacted to a 200-person anti-lockdown protest in the early months of the pandemic.

“We have a bunch of yahoos out in the front of Queen’s Park, sitting there, protesting,” Ford told a news conference in April 2020. “These people, they’re absolutely irresponsible, it’s reckless to do what they’re doing. Personally, I think it’s selfish.”

Ford’s tone now — toward the protesters who want an end to all COVID-19 restrictions and vaccine mandates — is decidedly more sympathetic.

“I can’t stand the shutdowns, the lockdowns, whatever you want to call them,” Ford said in the Hamilton radio interview. “Hopefully we’re all going to get through this together as soon as possible and we won’t need any more protests.”

Toronto Mayor John Tory is sending a markedly more forceful message to the protesters than “God bless ’em” and a wish for peace, with a nod to the fact that five major hospitals sit within 500 metres of the Queen’s Park front lawn.

“Any protest in the area of Queen’s Park absolutely cannot block off access to the hospitals around the legislature,” said Tory in a statement Thursday. “I have made it clear to [Toronto police Chief James] Ramer that we must do everything we can to avoid the type of situation currently faced by Ottawa residents and businesses.”

The Ford government has clearly been reluctant to get drawn into the Ottawa protest.

Ford himself said nothing all through last weekend about what happened. On Monday morning, his office issued a statement saying he was disturbed by the displays of “symbols of hate and intolerance” and the desecration of Canada’s war memorials.

But the statement was not posted to Ford’s 560,000 Twitter followers; in fact his Twitter account doesn’t make a single mention of the Ottawa protest, as if it weren’t even happening.

The justification for his reluctance is best summed up by Ford’s top cabinet minister from the Ottawa area, Lisa MacLeod. Her argument: the protesters are targeting a federal government policy, the mandatory COVID-19 vaccinations for truckers crossing the border.

“The only way that this is going to be de-escalated, in my opinion, watching what I’m seeing, is if there is leadership and that leadership has to come from the federal government,” MacLeod told reporters this week during a virtual news conference on an unrelated topic.

The Ottawa protesters’ demands actually go well beyond the federal government’s realm. They are calling for all COVID-19 vaccination mandates and restrictions to be scrapped.

The capacity limits on businesses, the proof of vaccination rules in such places as restaurants and bars, the mask mandate in indoor public spaces, all of those have been put in place by the provincial government.

Even if Saturday’s demonstration in Toronto ends that afternoon, it’s becoming harder for Ford to sidestep taking a stance on the protesters’ demands.

He dodged such a question on Tuesday, when asked directly by Adrian Ghobrial of CityNews: Does he support the federal vaccine mandate for cross-border truckers?

“I’ve been on the truckers’ side, I’ve always supported truckers from day one, but I support vaccinations,” Ford said. He didn’t even mention the mandate.

Taking a firm position on the protests is not without political risk for Ford and his Ontario Progressive Conservatives, with the election now less than four months away.

On the one hand, his political team doesn’t want him to be seen as aligned to any anti-vaccine or anti-mask sentiment. Even the government’s own polling shows broad support for workplace vaccination mandates and non-lockdown public health measures to prevent the spread of COVID-19.

On the other hand, public frustration over the length of the pandemic, the closures and the restrictions is real.

Still, a politician who wants to get re-elected wouldn’t want to overestimate the strength of any current of public sentiment represented by the protestors.

The maximum police estimate of the crowd at the height of the weekend’s protest in Ottawa was 18,000. Contrast that with the 160,000 people who got a shot of a COVID-19 vaccine in Ontario last weekend alone, as pointed out by TVOntario’s John Michael McGrath.

More than 11 million people of voting age have rolled up their sleeves to get vaccinated against COVID-19 in Ontario. Having them on his side is far more important to Ford’s election success in June than however many thousands join or back the protests.