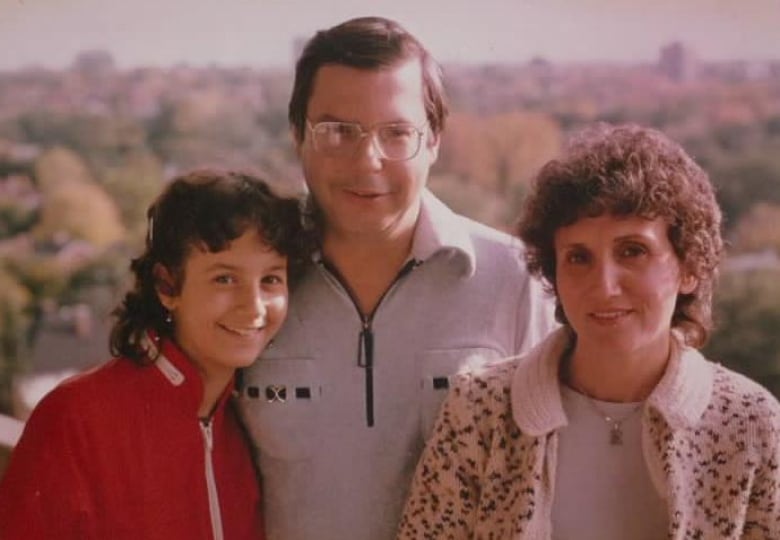 This First Person article is the experience of Julie Matlin, a freelance writer in Montreal. For more information about CBC’s First Person stories, please see the FAQ.

My mother loved to sing. My dad would play her favourites on his grand piano — Mama Cass, Gordon Lightfoot, Sammy Davis Jr. — while she swayed around the house. It embarrassed me as a child, but the older I grew, the more I joined in. There was an unfiltered joy to her singing, and it brightened everyone’s mood. This is what I think about each afternoon as I stand in synagogue, reciting the mourner’s prayer in her memory.

One night, after another chemo session gone wrong, we ended up in the ER. The drugs were great at killing the cancer that began in her ovaries, but they were also wreaking havoc on her immune system. The first two rounds went fine, but after that, each session ended in a hospital visit. After 24 hours at home, her platelets would drop and she’d run a high fever, landing her back for a week-long stay. I think it was our second midnight trip when she turned to me and asked, “Who sings that song?”

I looked at her with a raised eyebrow. There was no music playing. We hadn’t been discussing music. The question came out of nowhere. This was not unusual for my mother, though. She’d been known to spontaneously burst into hysterics and then wonder why no one else was laughing.

“You’re going to have to be a little more specific,” I said gently.

She sighed and shifted on the hospital bed, flushed with fever and already annoyed with the IV line in her arm.

Shaking my head in disbelief, I dialled my parents’ number. After almost 62 years of marriage, they had developed mind-reading abilities. He could be at the piano and she’d shout, “Phil, play that song!” and he would, without ever asking the title.

When my father picked up, anxiously asking after his beloved wife’s health, I interrupted him to ask, “Who sings that song?”

“The Weavers,” he said without hesitation.

Hanging up, I relayed the information to my mother. She shook her head.

I asked for some lyrics, so she sang. I Googled on my phone and came up with Sloop John B.

“The Beach Boys?” She shook her head again. “The Merrymen? The Kingston Trio?” That got a smile.

I searched YouTube and put the volume up as high as it would go while resolving to buy a Bluetooth speaker. My mother closed her eyes and sang along, “Call the captain ashore, let me go home. I want to go home.”

As I listened, the tears ran hot down my cheeks. It was so soon after her diagnosis, but it sounded like she’d already given up. I couldn’t fathom her not beating this thing. She was my anchor and without her I’d become untethered. At 48 years old, I still crawled into bed with her for the occasional cuddle. I went to her for everything.

Every time I got lost, my mother was there, guiding me home. From the heartbreak of my first crush to the soul-crushing depression that followed a broken engagement, through two bouts of post-partum depression, three work-related burnouts and an anxiety diagnosis — each time she led me out of the darkness. I refused to envision a life without her.

My mother was diagnosed in February 2019. Most of her illness was spent in and out of the hospital. She had a brief spell after surgery where she was declared disease-free, but the surgeon pulled me aside and said, “It will come back.”

That was in August 2019. I wanted to take her to Mexico. We’d never been away together, just the two of us. She’d have loved the cabaret shows, with singers performing all her favourites. I could picture us, margaritas in hand, belting out Can’t Take my Eyes off of You at the top of our lungs. But she refused. She just went back to work. Aside from her new short hairdo and narrower frame, everything seemed fine. Until around January 2020, when she said, “I know it’s back.”

Her next check up proved her correct. We were given the option of getting into a trial, an experimental treatment that included targeted drugs instead of chemo. She signed up, and at first, we thought we’d hit the jackpot. Tests showed that the amount of cancer in her body dropped drastically, but her health quickly deteriorated. By then it was March; COVID had hit, and we were all in lockdown. When she returned to chemotherapy, I wasn’t even allowed to accompany her. I didn’t see her again until mid-June, when she was moved into palliative care.

My brother made a playlist of all her favourite songs, and whenever we’d visit, we would play it for her. At first, she was able to sing along, and we could see the joy it brought her. After a while, the singing took too much energy, but she would still hum and tap her foot.

On the day she died, July 10, 2020, my mother weighed maybe 85 pounds. The last time I saw her, she lay in bed, unable to move, having suffered a stroke in the night. She couldn’t speak at all anymore, but still hummed as I played her songs on my phone. Seventeen months and I’d never procured the damn speaker.

I watched her for a long while, comparing the woman in front of me to that woman singing at the piano, the juxtaposition startling. All that life, gone.

After my mother died, I listened to that playlist all the time, even though it filled me with sadness. But those songs were a part of her, and now they’re a part of me. My then 12-year-old daughter, observing all this, asked me to make her a playlist of music from when I was younger. I did, and now I sing along to those songs instead. And every time I do, I wait for the day she’ll join in.