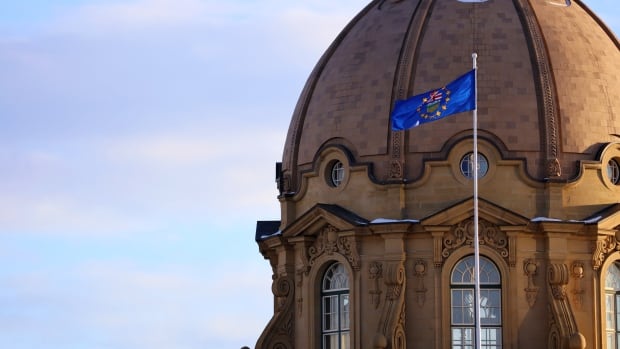 Pledging historic investments in health care, Alberta’s United Conservative Party government will table its fourth budget today — one that economists say could be balanced for the first time in eight years.

Government coffers will benefit from oil and gas revenues much higher than the finance ministry foresaw a year ago, when they estimated Alberta would have a $3-billion deficit in 2022-23.

“Obviously, we are benefiting from strong oil and gas prices,” Kenney said.

“But we are seeing dynamic growth in virtually every Alberta industry, and diversification happening like never before.”

It could be a dramatic shift from the the 2020-21 fiscal year, which the government finished with a $17-billion deficit.

Finance Minister Travis Toews is expected to introduce the budget in the legislature around 3:15 p.m. MT. You can watch it here live.

In Tuesday’s throne speech, the government also promised major investments in health care — with the construction of more hospital spaces, recruitment and training of more health-care workers, and contracting out more surgeries like knee replacements and eye procedures to private clinics.

The province’s goal is to do 30 per cent of surgeries in private clinics, up from the current 15 per cent, to help tackle a growing number of procedures delayed during the COVID-19 pandemic.

The government has also promised a program to help consumers with escalating utility bills, possibly in the form of a rebate.

Balancing the province’s budget by 2022-23 was a key election promise for the United Conservative Party.

University of Calgary economics professor Trevor Tombe said the government may achieve that partly by cutting more than $5 billion from the province’s spending.

But Alberta’s dependency on high oil revenues to balance the budget is unchanged, and unsustainable in the long term, Tombe said.

“We are as firmly on the royalty roller coaster as ever.”

NDP finance critic Shannon Phillips said Tuesday’s throne speech also suggested there will be little in the budget to help citizens struggling to keep up with the rising costs of groceries, utilities and insurance.

“While the UCP will talk about how great the treasury is doing, the reality is much different for ordinary people,” Phillips said.

With a government that’s pledged to bring down the public cost of post-secondary education to funding levels in other provinces, Alberta Union of Provincial Employees president Guy Smith worries colleges and universities will once again be a target for cuts.

He said the government should use any surplus revenue to bolster public services and relieve the strain on schools, hospitals, courthouses and social services.