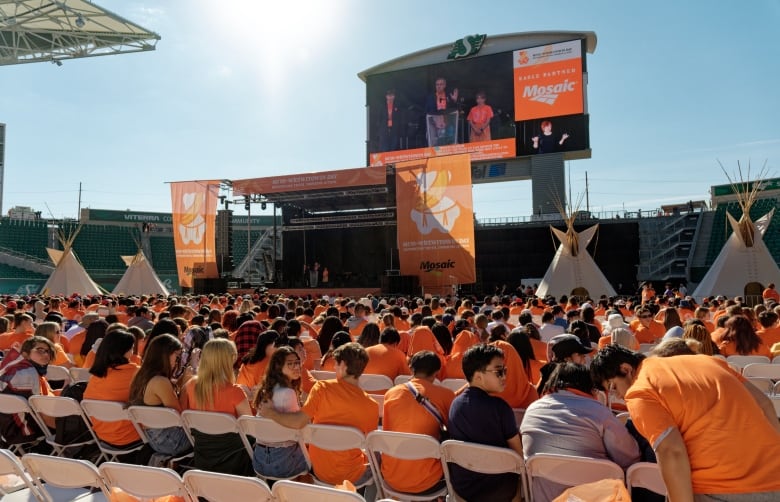 Many events are being held this week across Canada to honour Indigenous children and families as the nation marks its second annual National Day for Truth and Reconciliation on Friday.

Sept. 30 was set aside last year as a federal statutory holiday to commemorate children who died while being forced to attend church-run and government-funded residential schools, and those who survived, as well as the families and communities still affected by the lasting trauma.

Here’s a look at how the day and week are being observed.

In Regina, a crowd estimated at over 12,000 fills Mosaic Stadium on Thursday to celebrate the inaugural Miyo-wîcîwitowin Day.

Traditional Indigenous dancers perform at the event, which is meant to build awareness of the past and create a better future by understanding the importance of implementing the Truth and Reconciliation Commission’s 94 calls to action in the spirit of reconciliation.

Lisa Odjig Mchayle performs a hoop dance at the gathering.

Just under a dozen crosswalks throughout Kahnawake, most surrounding local elementary schools such as outside Kateri School pictured below, are repainted bright orange with stencils of white eagle feathers on Wednesday.

First Nations from southwestern Manitoba are riding united on a six-day journey beginning Sept. 25, honouring Every Child Matters for Truth and Reconciliation Week. Here, Unity Riders are pictured near Elkhorn, Man., on Tuesday.

Keira Jean Gamblin kisses her horse at the Every Child Matters Ride near Elkhorn.

People take part in a ceremonial survivors’ flag-raising event to honour Indigenous People who were forced to attend residential schools, on the grounds of the Victoria legislature on Wednesday.

Members of the Musqueam First Nation perform a welcome dance before Musqueam Coast Salish artists at Magee Secondary School in Vancouver on Sept. 23.

Musqueam Coast Salish artists and siblings Chrystal Sparrow, left, and Chris Sparrow unveil a spindle whorl carving they created as a gift to the school from the 2019 graduating class. The carving was unveiled ahead of Truth and Reconciliation Week, as part of an art and film project in collaboration with the Musqueam First Nation, the school and local businesses.