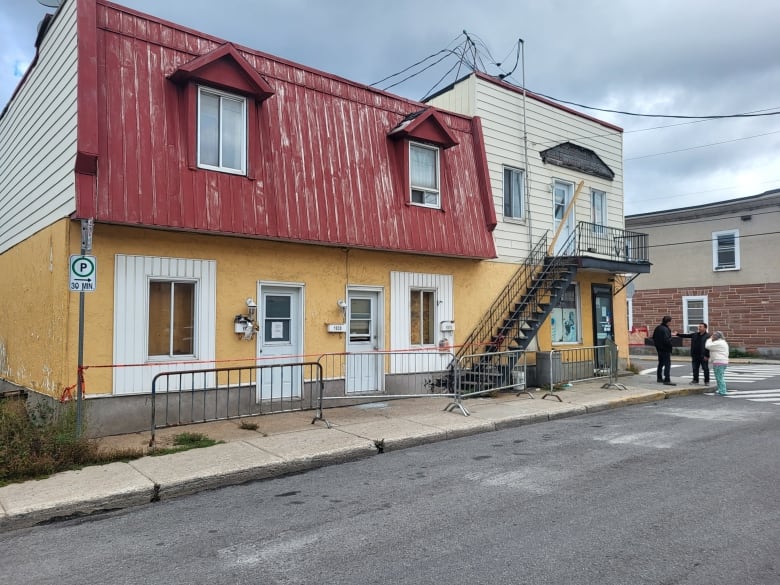 Zeen Wu stands at the corner of a residential street in Montreal’s Lachine borough, looking hopelessly at a dilapidated red and yellow building tacked with a demolition permit application.

The building houses his family’s dépanneur — the first and only employment Wu has had since immigrating to Canada from China 14 years ago.

But his livelihood is now in jeopardy. For over a month now, Wu’s family has been unable to enter their store after being forced to shut down due to what they were told were unsafe building conditions.

Wu says his landlord Lina Boivin, who is also the building”s owner, has refused to make the necessary repairs to allow him to reopen shop — something he believes is intentional due to her plan to demolish the building and construct townhouses in its spot.

Boivin’s lawyer says this accusation is false and that the building was already in poor condition when she bought it in December 2020 without a pre-purchase inspection. The lawyer says Boivin has been seeking the right to demolish it for more than a year.

A listing for the townhouses in question can already be found online. According to a broker, they are expected to be available around mid-2023 — despite Wu having a registered commercial lease until at least 2025.

He says his family’s finances have taken a hard hit over the past month, as they have no other source of income. He says he doesn’t know what he’ll do if his shop is destroyed.

“This job supports all my family’s life,” said Wu. “I have two children and I have my wife so this situation for now is very sad.”

For Wu’s family, the flaking, gaudy yellow paint on the exterior of the building and the cracked concrete near its front door are testaments to the dépanneur’s history in the neighbourhood.

So she says she was blindsided when she came into work on June 14 and found a public notice dated that day for “the total demolition of the main building located at 1000-1040 Saint-Louis Street.”

Now surrounded by red tape and metal barriers, the building houses three recently vacated tenant units, as well as the dépanneur. Located at 1000 Saint-Louis, the store’s tenants are the only occupants left.

The notice said a borough review committee would be meeting on July 13 — a month later — to consider the demolition request.

“I feel depressed because for me, this is my first [baby],” said Cui of her business, noting she began running the store before having either of her two children.

During the meeting with the review committee, Wu says Boivin responded no when asked whether she would be willing to create a space for the dépanneur within the townhouse project.

Two weeks after the meeting, Boivin was granted the demolition permit.

Unwilling to give up without a fight, the dépanneur’s tenants appealed the decision. That’s when they said things took a turn for the worse.

Wu says on Aug. 13, a day after the family filed the appeal, the toilet in the tenant’s unit located above the dépanneur broke, flooding and damaging the store. A week later, he says a food inspector dropped by in response to an anonymous call that the dépanneur should be inspected.

“We were seeing the pressure mounting,” Wu said, saying he felt the timing of the events was suspicious.

Aug. 23 was the first of multiple times the Montreal fire department showed up. Wu says firefighters told him they were called to inspect the building for structural damage. He says they found nothing and left.

But Wu says firefighters came and went over the span of four days.

Following an inspection on Aug. 24, a report written by a lieutenant with the fire department concluded there were no structural issues with the foundation of the building. The report was shared with CBC News by the family.

The lieutenant noted the only areas of concern were the front and rear balconies outside the tenant units, which he said he told the owner to either fix or completely remove “as soon as possible in order to allow the tenants to reintegrate.”

But in the end, following yet another call to the fire department, the store was locked up on Aug. 26 — the last time the family has been permitted inside.

Cui says she was given just two minutes to grab her keys and lock the back door of the dépanneur.

Lachine borough Mayor Maja Vodanovic says the borough is withholding the demolition permit for now in hopes that the landlord and tenants can come to an agreement.

“Our role is to see if the project fits the urban plan, if it fits our bylaws and according to all that, it does, so I don’t know legally how long we can withhold the permit,” she said.

Vodanovic says she hasn’t seen the tenants’ registered commercial lease but acknowledges that when there’s a new owner, “they have to respect the lease of the people who are there.”

Montreal constitutional lawyer Anne-France Goldwater says because commercial tenants have significantly fewer rights than residential tenants, a landlord often has a right to repossess buildings with a commercial lease, but “often there are clauses that say he has to give you equivalent space somewhere else, for instance.”

Boivin did not respond to CBC’s request for an interview, but in a phone interview, her lawyer, Mélanie Chaperon, said her client has repeatedly tried to negotiate with the family for the past year, but they haven’t budged. The family, for its part, says there’s been radio silence from Boivin.

Chaperon said a clause in the family’s lease says that if the building has been rendered “substantially unusable,” the owner can terminate the lease after giving tenants 60 days notice. CBC News has not seen the lease.

While she said she could not respond to the fire department’s report clearing the building save for its balconies, Chaperon said an inspection by an inspector of Boivin’s choosing found there to be “major defaults” requiring the building to be demolished soon after she purchased it.

Chaperon denied any wrongdoing on Boivin’s part in response to what the family called “suspicious” timing of calls to the fire department and food inspection.

Goldwater says while the family could take the landlord to court for failing to provide peaceable enjoyment of the leased premises, she says going to court should always be the last option.

For her part, Vodanovic says the borough is looking into amending bylaws to help protect small businesses with commercial leases in the future.

‘I cry all the time for my store’

The family says they understand the landlord’s goals but are critical of the way she’s gone about achieving them. They say they are willing to play their part in improving the community as a whole.

Cui says she and her husband have received overwhelming support from residents in the area as they wait to see what happens. A petition she began circulating to save the dépanneur has garnered more than 200 signatures.

“I still feel warm here from the community … but I cry all the time for my store,” she said.

The family has a meeting scheduled with Mayor Vodanovic on Oct. 4.

They say it’s their last-ditch effort to save their livelihood and, possibly, set an example for other small business owners in their situation.