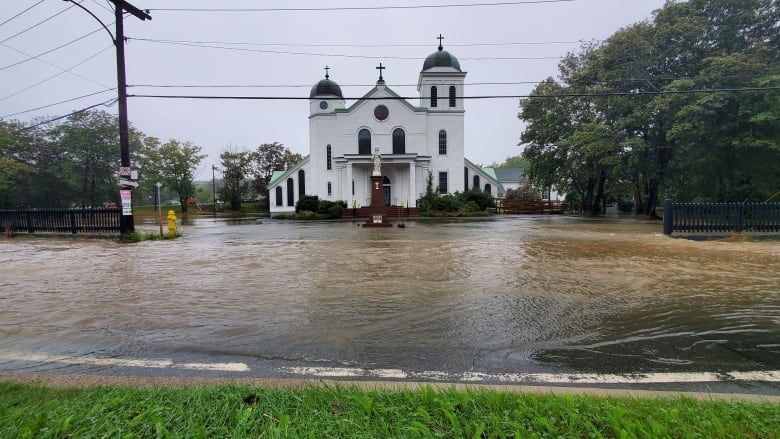 Rainfall warnings remain in place for much of the Avalon Peninsula on Monday as a result of post-tropical storm Earl, with overflowing rivers causing flooding and blocking traffic in some areas of St. John’s.

As of 5:30 a.m. Monday, roughly 175 millimetres of rain had fallen over the St. John’s area since Saturday afternoon.

Some streets along the Waterford River are flooded, leaving cars stranded in the water. Traffic into downtown on Pitts Memorial Drive is being diverted into Kilbride due to water build-up on the road and there’s a detour near the Railway Coastal Museum on Water Street.

Environment Canada says an additional 10 to 30 millimetres is expected throughout the day, but larger totals are also possible.

Neil said the highest rainfall totals for the area have fallen in Paradise, where 207 millimetres have dropped since Saturday, and Pippy Park, which has seen just shy of 200 millimetres. St. John’s west had 193 millimetres as of 8:30 a.m.

“We’ll likely see that rainfall warning [continue] at least to later this morning and possibly through the rest of the day today,” said Neil.

“A lot of the heavier amounts have really started to lighten up quite a bit. It’s more of a mix of light rain and drizzle as it stands right now.”

Neil said wet conditions are still expected into Tuesday but the heavy pockets of rain should taper off through Monday.

In Trepassey, on the south coast of the Avalon, damage to the town’s breakwater is causing concern for its residents.

“We were just about ready to start to fix that when this happened Saturday night,” she said. “It’s devastating. We have a loader down there now clearing it off, trying to make an emergency opening because nobody can get down and nobody can get up.”

Pennell said there are 25 homes and about 35 people stranded since Saturday because of the damage.

“If we have an emergency down there now we’d have to get a helicopter or a boat to get them up,” she said.

Engineers were headed to the area as of 12:30 p.m., Pennell said, adding she’s hoping there will be enough room for local vehicles to squeeze through within the following hour.

Meanwhile, on top of closing some flooded roads, the city of St. John’s is closing public parks. Bowring Park is closed until Tuesday morning, while all of the city’s baseball and softball diamonds, soccer pitches and football fields will be closed for the remainder of the day.

The city is holding a media briefing at 1 p.m. to give its own update on flooding and recovery.

Keith King, owner of King’s Plumbing, has a busy day on the books.

King was busy helping a customer keep the water at bay from their basement on Portugal Cove Road near Rennie’s River.

“It’s unavoidable when the river is overflowing. You can’t pump the river,” he said. “She got about a foot of water in her basement.”

King said he gets a call from that particular home every year when the river overflows.

He said he had five or six more customers on his list after leaving Portugal Cove Road, all calling for help with flooding basements.