Heartbreak on the 49th parallel: Lives interrupted by the Canada-U.S. border closure 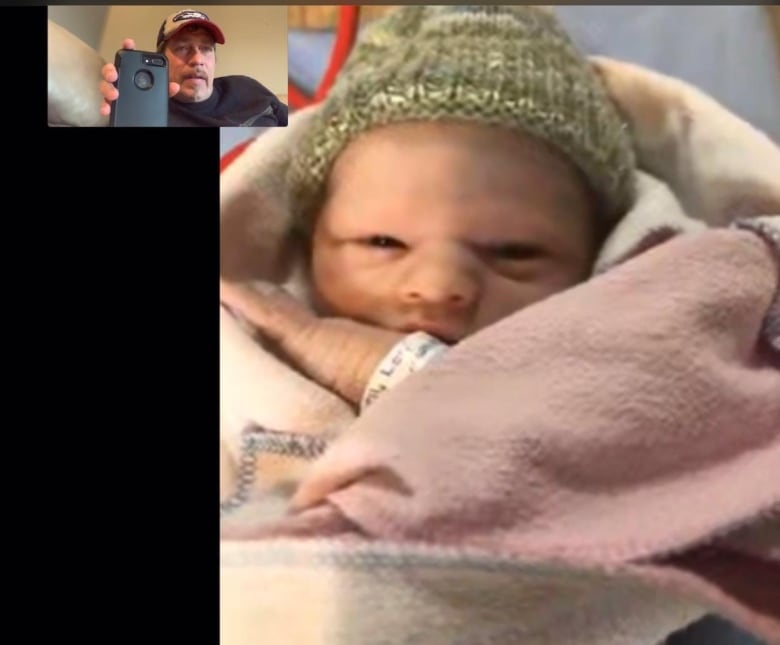 It’s been a dismal few days for Canada-U.S. relations. Specifically, for people in relationships with someone on the other side of the border, dealing with depressing news about their life-altering limbo.

CBC News has spoken with numerous people struggling to deal with restrictions on Canada-U.S. travel intended to slow the spread of COVID-19.

That includes two different mothers whose newborns have never seen their fathers in person; a woman completing her pregnancy alone; two other couples with children; and a couple who had their last date at the border, where it was cut short by border agents.

“Defeated,” is how a new Ontario mother, Megan Scott, described her state of mind this week.

“It’s heartbreaking,” said Haylie Lynn Gadsby, who has a new baby in Windsor, Ont., while the baby’s belongings are in Michigan — with her fiancé.

“I am quite mad,” said Steven Husak, who has two children near Detroit and is trying to start a new life with them in Ontario with his fiancée, whom they view as a mother. They were hoping to go camping this summer.

Two bits of news this week extended the heartache across the 49th parallel.

First, as reported by CBC News and other media, government officials expect a ban on non-essential land travel across the border to be renewed beyond June 21.

Another blow came in the fine print of an announcement from Prime Minister Justin Trudeau.

He announced a relaxation of rules for travelling to Canada — but they only apply to people under specific conditions, which many stranded partners say they cannot meet.

They require a 15-day minimum stay in Canada, with 14 days in quarantine, and are only for people who meet the legal definition of being immediate family to Canadian citizens.

A new community of people has popped up to share its frustrations in private Facebook chat groups, which count hundreds of members.

They come from different places, and different walks of life, but one thing they tend to have in common is they’re at transitional moments in their lives.

Those with pending immigration applications, for example, have seen them slowed by the pandemic.

Parents, babies, separated by a border

One online chat group was started by a physician in Windsor, Ont., Ashley Cook, who is expecting a baby this summer with her Michigan husband.

“How are we treating people this way?” Cook said. “This is hurting so many people.”

She said many people can’t quarantine for 14 days.

For example, Bartell’s husband is in Maine, her future home, and can’t leave for too long, as he’s running a farm with animals and a construction company.

He hasn’t been allowed to visit their two-month-old baby, and now Bartell fears he still won’t be able to under the new rules.

“I put on a pretty good front,” she said, “but I’m an emotional wreck.”

She said she leaves the phone next to her head at night because the sound of her husband breathing helps her fall asleep.

Scott, the new mother who lives near London, Ont., said her husband can’t self-quarantine in Canada for that long either, as he’s an active-duty member of the U.S. military stationed in Virginia. Her husband has been away for nearly half the life of their eight-month-old daughter.

[We’ve missed] so many milestones. First tooth, first word — which was ‘Dada,'” she said.

“[That’s] time that we will never be able to get back as a family.”

Separated couples are also fuming about what they see as double-standards — with different rules in different countries for different modes of transportation.

Take air travel. An official at U.S Customs and Border Protection confirmed Wednesday that the U.S. allows Canadian travellers in by plane.

That means someone living in a Canadian border town could visit a nearby U.S. town — provided they can get a plane ticket and fly there.

Montrealer Béatrice Beuillé said she can’t understand why, in the name of public health, she’s barred from driving alone to Vermont — but it’s fine if she manages to find a short-haul flight.

The Canadian government, meanwhile, said it treats land and air passengers the same way. Unlike the U.S., it has just relaxed rules for immediate family.

That can get murky, too.

A spokesperson for the Canada Border Services Agency said she could not give a definitive answer whether, for instance, unmarried parents of a Canadian newborn are considered each other’s immediate family.

The official suggested they likely would be, but it’s at the discretion of a border services officer. In any case, the visitor would need to quarantine and stay in Canada for the minimum 15 days.

Husak said people were hoping for broader exemptions this week, and many are struggling emotionally.

“This news really hurt,” he said.

Husak got to know a number of affected families when he gathered testimonials for a video about their stories.

The title of his video, Love Is Essential, is a riff on the idea that only essential workers are allowed to cross the border as a result of the agreement between Canada and the U.S.

Some of those cut off by the border closure expressed frustration that other activities are resuming, including businesses reopening and huge protests across major cities.

Ethan Gilson has a unique perspective on the longing for love.

He’s not only a fiancé stuck in limbo, he’s a mental-health counsellor in Vermont.

When asked about the effects of isolation, he mentioned studies involving rats, in which lonelier rats opted for drugs over water.

Gilson is also growing an increasingly unruly beard, the pandemic equivalent of a playoff beard. He’ll shave his off when he reunites with his partner, Béatrice Beuillé from Montreal.

He and Beuillé were in love before they had their first date. They met online, while she was visiting family in France, and he had her laughing so hard that she left the house to avoid waking her parents.

They finally met in person in Montreal.

“At the end of the [first] date, I told her I was going to marry her someday. She said, ‘I hope you do,'” Gilson said.

He proposed after six months, during a hike in Vermont. That was in early March.

Then the pandemic hit. “Which really sucked,” Gilson said.

Our biology is meant to be social. We’re always trying to connect.– Ethan Gilson

They managed to organize a date at a tiny border checkpoint on a hilly, country road. They set up lawn chairs on either side and talked for hours.

The next week, when they went back, they were scolded by border guards from both countries.

“They told us, ‘No, that was a mistake. We don’t want to be managing this. The law isn’t clear.’ So we continued via FaceTime,” said Beuillé, who works for a cargo company.

She’s found this period isolating, living away from her family and Gilson, and not having even shaken a human hand in three months.

She’s tried calling government offices for information, but she got bounced from one to another.

As month after month goes by, what most frustrates her is the lack of evidence of a long-term plan. It’s unclear, for example, what metrics governments are using to decide when to reopen the border, she said.

She and Gilson are starting to plan their wedding. He’s having a house built in Vermont. They hope to have the ceremony on the property and move in on the wedding day.

The mental-health counsellor offers a word to others struggling through this moment.

“Our biology is meant to be social. We’re always trying to connect,” Gilson said.

“This [isolation] is all going to end. This is not permanent.”