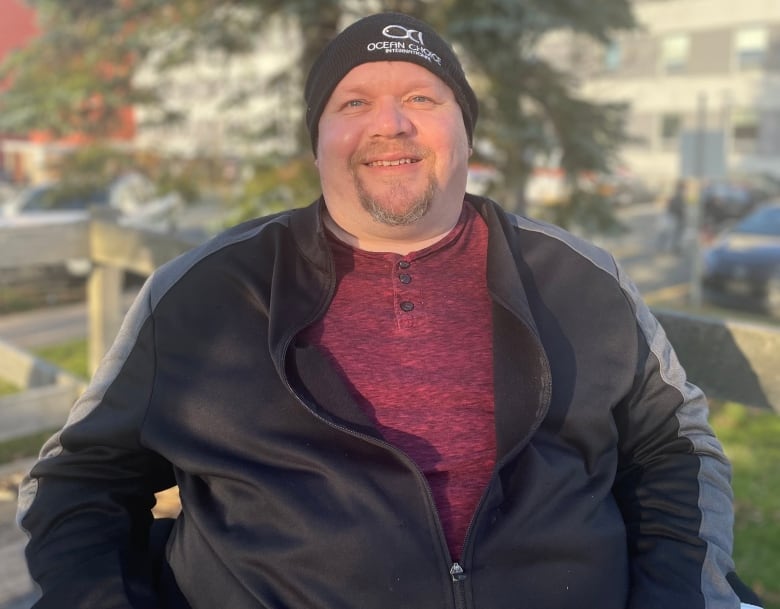 Jody Short was ankle-deep in snow in February, a shovel in his hands, when searing pain shot up his left leg.

“I was almost passing out with pain,” recalled Short recently, speaking quietly from the recreation room of the Miller Centre in St. John’s, where he’s been stranded for three months.

Short ended up hospitalized, rushed to an operating room to fix an aortic dissection — a tear in his main artery, and the beginning of a nightmarish series of medical woes that would ultimately leave him unable to walk or return to his home.

He had about a 40 per cent chance of surviving that operation, he said, prompting his family, and even the surgeons, to say a prayer and their goodbyes before he went under the knife.

When he awoke from a coma a week later, Short faced yet another hurdle: unexpected paralysis. Suddenly, in his mid-40s, he found himself bedridden, unable to feed himself or brush his own teeth, in constant pain.

Some weeks later, Short’s mother discovered a bedsore on his left buttock, veins vivid and red, as though “something was spreading from this area,” Short said.

He was rushed to surgery again the next day, this time for necrotizing fasciitis — more commonly known as flesh-eating disease.

“Very few people live from that type of disease,” he said. “It was just like everything was going wrong. I still hadn’t had a chance to really deal with being paralyzed.”

Doctors started talking about amputating his leg and removing part of his pelvis to stop the bacteria from its lethal intrusion of his body. Short declined, thinking it was already too late.

“They go in and they debride whatever they can debride to save my life,” Short said, referring to removing damaged tissue. Surgeons removed most of the muscle of his left thigh and buttock, tunneling up into his back before essentially giving up, he recalled.

The disease had spread too far, too fast.

Doctors gave Short 48 hours to live. “I started calling, going through my phone and calling all my friends … [to] express how much I appreciate the friendship. My life was about to end, right?”

The next morning, Short woke up feeling oddly better.

“I was reinvigorated with energy and ready to go,” he said. “It was like a miracle.”

Short woke up the next day, and the day after, markedly improving. His doctors, he says, were stunned. A CAT scan showed the infection had simply disappeared.

Short spent the following six months in hyperbaric treatment to prevent the bacteria from returning, waiting for his wounds to heal.

In August, he arrived at the Miller Centre to learn how to live independently in a wheelchair, which he’ll need for the rest of his life.

The long wait for home

These days, he’s busy working on his arm strength and spending time with friends, waiting and wondering when he might be able to return to his house in Conception Bay South.

Short says his applications for provincial disability grants were denied, since they were based on last year’s tax returns.

He’s gone months without working, he says, and can’t afford to build a wheelchair ramp, widen doorways and renovate his kitchen and bathroom to accommodate his new disability.

The Department of Health declined to comment on Short’s situation, pointing instead to Newfoundland and Labrador Housing (NLHC), which manages the province’s home modification program.

NLHC has not yet responded to requests from CBC News.

Short’s friend Elizabeth Hogan recalled Short phoning her from what was expected to be his deathbed.

“Every emotion you could possibly imagine, I felt that day,” said Hogan. “Like my husband said, I cried from the soles of my feet.”

Hogan and another friend, Myles Higgins, are now helping raise funds to get him home.

“Right now it’s almost like Jody is living in a bit of limbo,” Higgins said, pointing to provincial rules that have prevented Short from qualifying for disability funding until he can report a lower income.

“At this point he’s about ready to be home.”

Short says he won’t be able to work for the near future as he learns to manage his pain. But eventually he wants to forge a new life, building things with his hands and making websites for charities.

“It’s unbelievable and overwhelming, the amount of support,” Short said.

“I think without the support, I wouldn’t have been as strong to go through it all.”