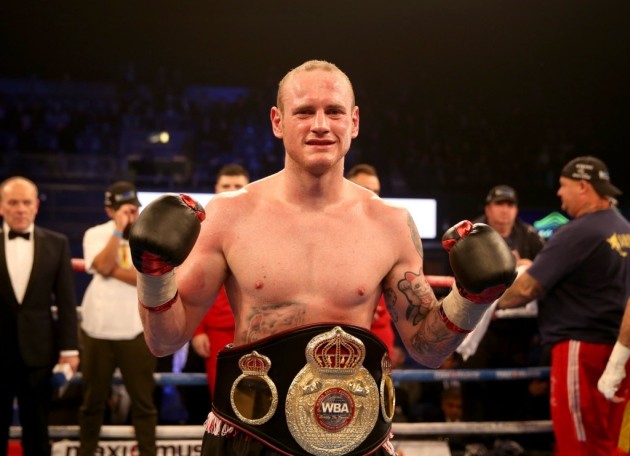 George Grove became a world champion at the fourth event after he stopped Fedor Chudinov in Sheffield.

SHEFFIELD — George Groves won a world title on the fourth attempt after overcoming a slow start to force a sixth-round stoppage of Fedor Chudinov Saturday.

The Briton claimed the vacant WBA world super-middleweight title with a relentless attack of clean punches that left Russian Chudinov dazed and immobile, prompting the stoppage.

Victory on the undercard of Kell Brook’s IBF world welterweight title defeat to Errol Spence in front of a crowd of 27,000 at Bramall Lane sets up the possibility of Groves fighting bitter rival James DeGale, the IBF champion, next year.

“This is the end of a lifetime’s work,” Groves told Sky Sports after his victory.

“[Trainer] Shane McGuigan has resurrected my career. Now I’m mature enough to admit that. I feel like I’m the best in the division. I’m willing and ready to fight anyone.

“He caught me with some good right hooks, and one actually stung quite a bit. But I found my feet. I can put those losses to bed now, get on with my life and hopefully go on to better things.”

Groves burst into life in the sixth round to force the stoppage after dazing Chudinov first with a quick flurry of blows and then following up with a barrage of hooks.

Groves admitted that defeat to Chudinov might have ended his career following previous world title defeats to Badou Jack [split points decision in September 2015] and fellow Briton Carl Froch [both by KO in 2013 and 2014].

But after registering his fifth win since losing to Jack, Groves is back among the super-middleweight elite to start chatter about a rematch with DeGale, whom he out-pointed in 2011, in a world title unification clash.

Chudinov (14-2, 10 KOs), 29, lost the same WBA title by a disputed majority decision to Felix Sturm in February 2016, and the Russian had not fought since.

The vacant WBA belt was on the line after Sturm gave it up following a positive test for the banned anabolic steroid stanozolol, and despite the long layoff, Chudinov was razor sharp early on as he repeatedly caught Groves, including with a chopping right in the first round.

Groves (26-3, 19 KOs), 29, from west London, was kept on the back foot in the second round as Chudinov continued to throw an impressive volume of shots. The Briton, looking a bit overwhelmed, could not establish any authority as the Russian kept marching forward with a relentless work rate.

But Groves slowed down Chudinov in the fourth, with a few combinations finding the target, and it spurred on the Londoner to be more aggressive in the following round. Groves, perhaps sensing he was behind on points, then produced his best punches in the sixth round to clinch the victory.