Greens’ Elizabeth May speaks out after ‘terrible election result’ 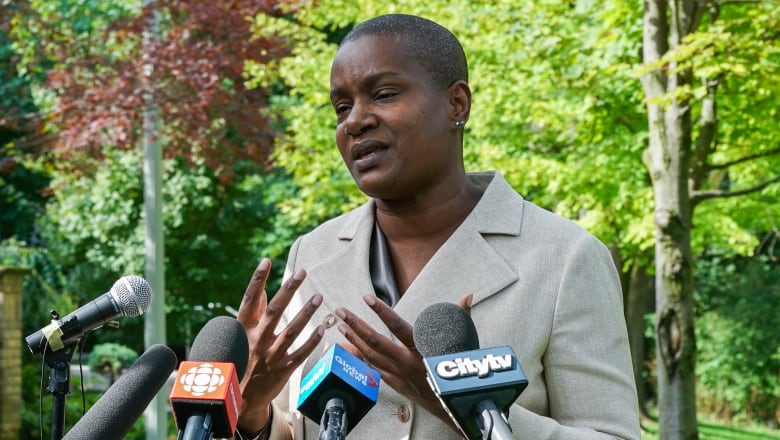 After a “terrible election result,” Green Party MP and former leader Elizabeth May says she must speak out and clear the record on her federal party’s status.

“I knew I’d get more criticism by saying something about what’s going on than by staying quiet,” said May, who was re-elected in her riding of Saanich-Gulf Islands in the Sept. 20 federal election.

May says Green Party Leader Annamie Paul, who announced on Sept. 27 she was stepping down as the leader, hasn’t actually officially resigned and still controls party communications.

“Someone needed to explain that the reason they weren’t hearing from the Green Party is that the communications are controlled by Annamie Paul,” May told CBC News.

May says she had been asked to refrain from speaking about internal party politics, but decided she had to speak out after Lorraine Rekmans, the president of the party’s federal council and a member of the Serpent River First Nation, was unable to send out a statement through the party for the National Day for Truth and Reconciliation last Thursday.

“She wanted to make a statement on the National Day of Truth and Reconciliation and the communications staff informed her, ‘We only take instruction from Annamie Paul and you will not be making a statement,'” said May.

On Sept. 20, Paul came in fourth place, her third defeat, in the riding of Toronto Centre. Victoria Galea, Paul’s executive assistant, said the Green Party leader had been set up to fail and placed a lot of the blame on May’s lack of support.

“Every single day, the party has set her up for failure, and that includes the former leader of the party,” Galea told CBC News.

May denied that she hadn’t supported Paul. She said that she had even offered Paul her seat in Saanich-Gulf Islands.

“I was heavily criticized for not offering it, but I had, in fact, offered it to Annamie. At the time, she said she was not interested in trading seats,” May said.

She said she fundraised for Paul, and the party had more than adequate resources for a national tour.

“The fact [is] that Annamie Paul as new leader was granted far more resources, far more authority than I ever had,” May said.

May’s focus now is on supporting whoever ends up becoming the next leader of the party. She says she will not be considering a return to the position.

“We have a lot of very talented people in the Green Party,” she said. “If people turn to me, it’ll look like, ‘Oh, they had nobody but that poor old lady. And there she goes again.’ So I think I want to focus where my energies feel most beneficial.”