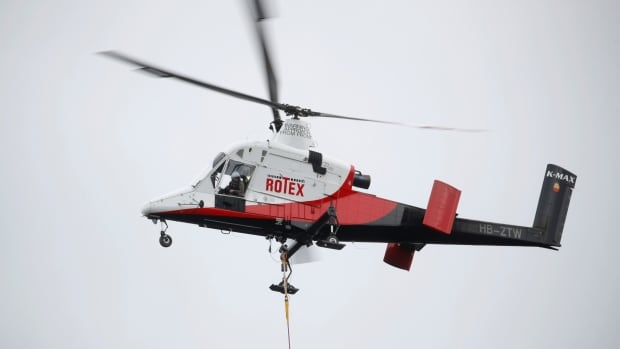 One person has died after a helicopter crashed into the ocean Monday on British Columbia’s Sunshine Coast, according to the RCMP.

Officials confirmed the helicopter went down around 2 p.m. PT in the area near Killam Bay, at the entrance to Jervis Inlet, around 40 kilometres north of Sechelt, B.C.

“Witnesses in the area were the first on scene and some debris of the helicopter was located, but the lone occupant and pilot was not,” read a statement from RCMP on Tuesday.

“A search was conducted in the area without success.”

The aircraft was being used for heli-logging, according to the Transportation Safety Board (TSB).

A TSB spokesperson said the agency was “gathering information” on the crash and has deployed investigators.

“We are awaiting further information from first responders,” Chris Krepski said in an interview Tuesday.

Krepski said the helicopter was a Kaman K-MAX aircraft, which is designed to lift more than half its own weight and has been used commercially for logging since the 1990s.

On Monday, Jarvis Gray, a driver with with High Tide Tours & Water Taxi in Egmont says he heard a call come in on his radio saying that a helicopter had gone down in the area.

Gray says he was about five minutes away at the time so he jumped in his boat to see if he could help. He was the first one to discover the wreckage. The only thing he saw when he arrived were three pieces of rotor blade sticking out of the water.

“I imagine everything else had sunk by that point. And really, there wasn’t anything left to see,” Gray told CBC.

The B.C. Coroners Service is also investigating the pilot’s death.