Government calls on private sector to come up with compostable, recyclable pandemic gear 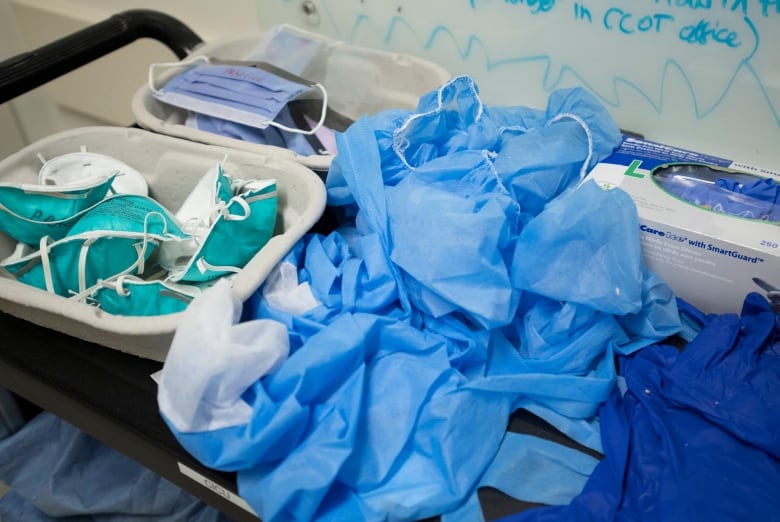 Worried about the environmental damage done by growing consumption of personal protective equipment (PPE) during the pandemic, the federal government is asking the private sector to come up with PPE products that won’t end up in landfills.

“Our government is acting quickly to ensure that we are mobilizing our innovation programming and resources to confront and respond to the COVID-19 pandemic,” said Minister of Innovation, Science and Industry Navdeep Bains in a press release.

“The successful Made-in-Canada solutions to the challenges launched today will help contribute to our health care response to keep Canadians safe into the future.”

The first challenge seeks technologies for “efficient and cost effective” recycling of PPE waste generated by the Canadian health care system. The technology must be able to transform PPE products that may contain traces of bacteria or viruses into “valuable materials that can further be used in manufactured products,” according to the release.

The second deals with compostable surgical masks and respirators, including N95s, which could be mass produced and used by health care workers.

Companies accepted into the program could receive up to $300,000 in government funding to develop proof-of-concept, or up to $1 million to develop a working prototype.

Countries around the world have seen their consumption of PPE soar in recent months as hospitals, workplaces and individuals implement infection prevention measures to slow the spread of COVID-19.

Most of those products are made from non-biodegradable, petroleum-based polymers and are designed to be used only once and then discarded. In Canada, the vast majority end up in landfills — or are incinerated if they are deemed to be a biohazard.

The federal government estimates that 63,000 tons of COVID-19-related PPE will end up as waste in Canada over the next year.

With the growing use of masks outside of health care settings and among the general population, more and more PPE products also end up as litter on streets and parks, in rivers, lakes and oceans, said Sarah King, who leads Greenpeace Canada’s oceans and plastics campaign

“This is just the latest example of how when we produce too much disposable anything, we can’t contain it and it essentially leaks into the environment and starts to negatively impact the ecosystem,” King said.

“Plastic as a material, which most of the PPE is made of, essentially pollutes from production all the way through to disposal,” King said.

Last week, the Liberal government unveiled a list of six plastic items it plans to ban at the end of 2021: grocery bags, straws, stir sticks, six-pack rings, plastic cutlery and food takeout containers. Personal protective gear and other medical products made from plastics are exempt.

The companies that produce single-use PPE do their best to make sure customers know how to properly dispose of the products, said Benoit Larose, a vice-president at Medtech Canada, the trade association that represents medical technology companies.

“The issue of littering and disposal, of proper disposal of medical equipment in general, is important to industry and to the association,” said Larose.

“The companies are trying to reduce their environmental footprint to make sure that there is not unnecessary waste generated by the use of our products.”

In addition to the business challenges launched today, the government is providing support to Canadian researchers and companies working on alternatives to single-use PPE, such as reusable PPE, a spokesperson for Environment and Climate Change Canada said in a statement.

“At the most recent Canadian Council of Environment Ministers meeting earlier this summer, pollution considerations relating to PPE [were] discussed and the Government of Canada committed with the provinces and territories to working together and with industry to ensure we can properly dispose of PPE so it does not end up in our natural environment,” Chelsea Stacey said.

An international group of experts and health professionals signed an open letter this summer encouraging more widespread use of reusable masks and gloves as a way to reduce waste generated by single-use PPE products.

One of the signatories was Dr. Joe Vipond, an emergency room physician at Rockyview General Hospital in Calgary who also serves as interim president of the Canadian Association of Physicians for the Environment.

Vipond said reusable PPE such as cloth masks and gloves should be the norm for the public, but that widespread adoption of reusable PPE in health care settings will be more challenging because of regulations around safety.

“The thing to recognize is there’s an excellent viable alternative to disposable masks for the public … We know the cloth masks are either almost as good as good or better than the surgical mask,” said Vipond. “In the hospitals, it’s harder to see an alternative where we’re pretty much stuck using single-use masks.”

Some companies are developing reusable PPE products meant to be used in health care settings.

Winnipeg-based Precision ADM is engineering a reusable N-95 respirator mask — widely considered to be the gold standard in respiratory protection — that can be used up to 30 times before being discarded if it’s disinfected after each use, CEO Martin Petrak told CBC News.

Petrak said the company, which already has a contract with the Manitoba government, hopes to obtain Health Canada approval for its N-95 mask next week.