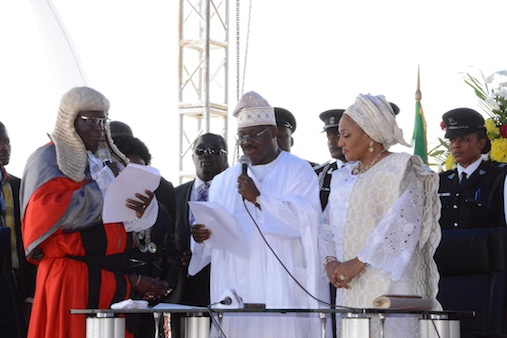 Gov. Abiola Ajimobi of Oyo State has sworn in 239 Justices of Peace (JP) to assist the state government in the dispensation of justice and maintenance of peace and tranquility.

The new Justices of Peace sworn in on Thursday at the House of Chiefs, Secretariat, Ibadan, include Chief Moses Adeyemo, the Deputy Governor and Alhaji Olalekan Alli, Secretary to the State Government.

Retired Justice Akintunde Boade sworn in Adeyemo, while Adeyemo in turn sworn in others on the list.

Ajimobi said that the new JPs were selected, having been adjudged worthy of being honoured with the title.

The governor, represented by his deputy, implored them to use their appointment to promote peace and delivery of untainted justice in their areas, particularly in Oyo State and Nigeria.

Ajimobi also urged them to see their appointment as a great responsibility toward the promotion of peace, rule of law and good governance in their communities.

“As we all know that Justice is the bedrock of democracy, our administration will ensure that justice is not only done, but seen to be manifestly done at all times.

“Toward this, an enabling environment is being made available for the judiciary in the state to discharge its duties without fear of favour.

“Apart from the recent appointment of some Magistrates and Senior Magistrates to the lower bench of the State Judiciary, Grade `A’ Customary Court Presidents are established for the first time in the state.

“Let it also be known that appointment of more Judges of the State High Court and the Customary Court of Appeal is now before the National Judicial Council,’’ the governor said.

He said that the powers of a Justice of Peace were to preserve the peace, suppress riots and affray, disperse all disorderly and tumultuous assemblages.

The governor said they were judicial officers, adding that their appointment does not guarantee any immunity on actions taken or remunerations.

In his remarks, Mr Oluseun Abimbola, the state Attorney-General and Commissioner for Justice, said that the confidence government reposed in the JPs was an acknowledgement of cultural instinct of communal peace.

Abimbola said, “JPs are Ambassadors of Peace at the grassroots, expected to familiarise themselves with their immediate neighbourhood, settle rifts, foster unity and help to resolve conflicts using their competences.

Also, Mr Adetunji Gbadegesin, the Permanent Secretary and Solicitor-General in the ministry, said that government was ready to collaborate with them in their new crusade of maintaining peace in the society.