Google Launch 7 new products announced at the live event The Hardware race is getting hotter, and Google doesn’t appear to be carrying last. 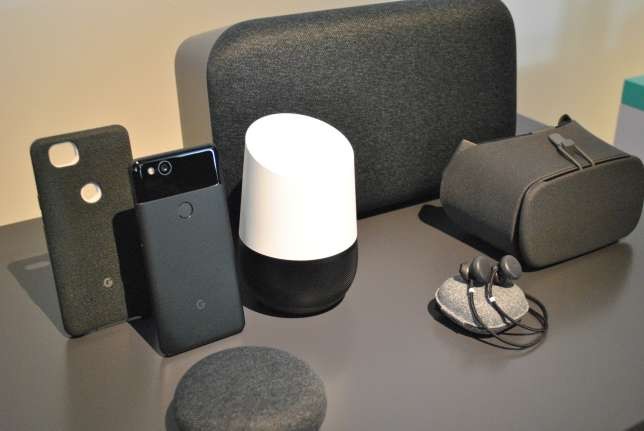 Google is going harder on hardware products, and to be honest, we don’t want anything to stop them.

On Thursday 4th of October, they announced 7 new products at the Google Launch event, and here they are:

The Pixel and Pixel 2 XL:

The Pixel 2 and 2 XL has the best smartphone camera “ever rated.” (Google)

This tag team is an upgrade from last year’s Pixel phones, inside and out. From the OLED screens to a special focus, to the camera, this phone is here to play, and win. In fact, DXO Mark, a rating company, has ranked the Pixel camera as the best they’ve ever rated. The iPhone 8 didn’t last so much on that throne. They’ll be retailing for £629/$649 and $849 respectively.

The Google Home Mini is covered in fabric, just like the original Google Home smart speaker.

This small smart speaker is about the size of a donut, so best of luck trying not to pick it up and eat it if you get hungry. It’s not the music speaker in the real sense. Just one that you have to pair with another wireless speaker. The point is to keep this in another room and spread the reach of the Google Assistant around your house. It will sell for $49, with pre-orders opened on the 5th, and be in stores on 19 October. Don’t see it coming to any Nigerian stores officially though.

This is the big deal, which can actually play music and take intstruction. And of course, mess things up for the Apple and Sonos market. It’ll cost $399, and be out — in the US only — in December. And of course, it’s not coming to Nigeria.

This one’s to help you indulge in all your photo pleasures. This tiny camera has a brain of it’s own aka artificial intelligence. It scans people’s face for expressions and all that, looking for perfect photo moments. All you have to do is set it, forget it, and get around with other stuff. When you check back later, cute moments will be waiting for you, saved. $249, in the US only. Again, no Nigeria.

Google Pixel Buds in their charging case. Note the faint “G” design in each bud.

This headphone outslays Apple’s Airpods. When paired with your Google Assistant, it can translate 40 languages to English in real time. Available from 22 November. Still, not in Nigeria.

This is a super hybrid tablet, plus, laptop, plus phone. All in one beautiful, sleek body. It runs on the Chrome OS and even has a dedicated Google Assistant button on the desktop. At 1kg and 1cm, it’s going to cost $999, and wont be available till the end of October. You’d have to pay for a stylus separately if you need one though.

I bet saying “not in Nigeria” shouldn’t be much of a surprise at this point, right?

Nothing seems to be new about these VR headsets except the colour. $99 is how much it will cost.