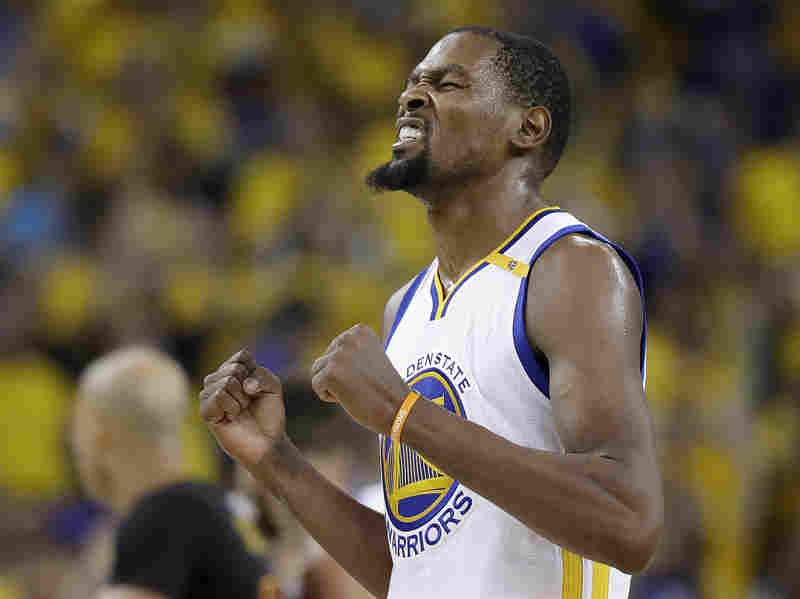 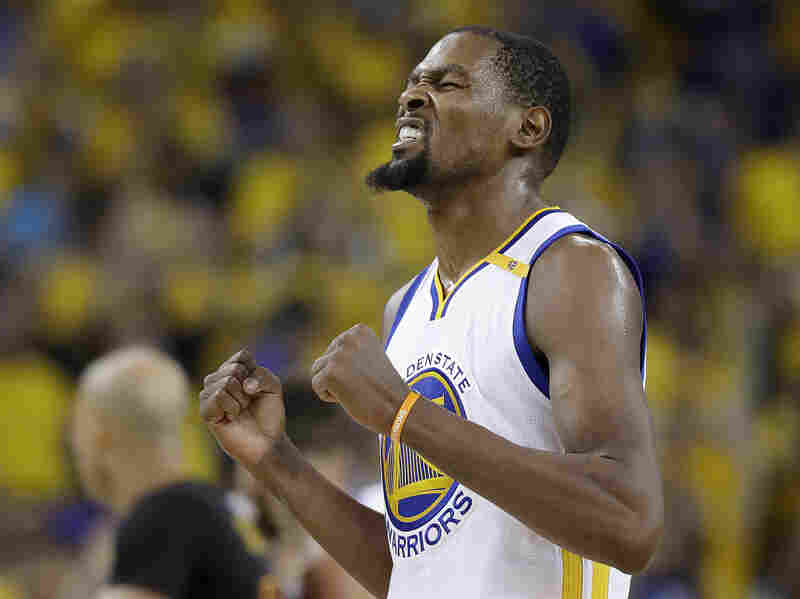 Golden State Warriors forward Kevin Durant reacts after scoring against the Cleveland Cavaliers on the way to the Warriors’ second NBA title in three years.

The Golden State Warriors earned their second NBA title in three years with a 129 to 120 win over the Cleveland Cavaliers in Oakland Monday night, led by All-Star forward Kevin Durant’s 39 points and strong bench scoring.

Durant’s stellar play all season and throughout the playoffs vindicated Golden State’s massive payout to the superstar in a controversial off-season deal.

But it was Durant, who left Oklahoma City for Oakland at the end of last season, who carried the team.

The capacity crowd, most dressed in Warrior gold T-shirts, cheered and sang along with the tune “We Are The Champions” as confetti fell.

The Warriors started the game lackluster and trailed at the end of the first quarter.

But a Durant dunk about four minutes into the second sent the sold-out hometown crowd into a frenzy. The Warriors went on a 21-to-2 second-quarter run. They led at the half by 11.

The Warriors, once again, showed their team depth with Andre Iguodala scoring 20 off the bench, including several emphatic dunks and three-point shots that seemed to rejuvenate the Warriors and their fans.

The Cavaliers, led by stars LeBron James’ 41 points and Kyrie Irving’s 26, repeatedly battled back and pulled Cleveland within striking distance of Golden State in the second half.

But each time, the Warriors recovered — led by Durant’s clutch shooting.

This is the third straight year the Warriors and Cavs faced off in the Finals. There was more than a touch of pay-back Monday night. In last year’s championship series the Cavs roared back from a 3-1 deficit to spoil the Warriors’ record-setting 73-win season.

Sometimes lost in all the chatter about a possible Warriors’ dynasty is the fact that Golden State plays beautiful, often unselfish team ball.

Throughout the playoffs coach Steve Kerr encouraged his team to enjoy the ride, to “play with joy.” And throughout the Finals, it often looked as though they were listening to him. The team’s four All-Stars shared the scoring wealth and played tough defense.

Kerr joked after the game, “Actually we had very little talent, it was mostly coaching.”

“They’re so committed to each other and unselfish,” Kerr added of his players.

Durant, in accepting the Final’s MVP Award, agreed. “It’s a team sport and I wanted to achieve the highest honor, which is win a championship.”

“We did it!” he exulted, saying it was fulfillment of a childhood dream.

The only real drama in the Warriors’ path to a championship this season was Kerr’s health. He missed 11 playoff games dealing with on-going complications from back surgery. Kerr returned to full-time coaching for the Final’s second game.

Cavs’ superstar James had another great season and playoff run. He led his team to a dominating game-four win in Cleveland. But in the end, James fell short.

With the off-season acquisition of Durant, the Warriors, arguably, have the NBA’s best collection of players in recent decades. And with the team’s core lineup all in their prime, it looks like they could remain at championship caliber for several more seasons.

“Pretty much all of their big-name guys are in their 20s,” the Cavs’ James said, “and they don’t show any signs of slowing down. So there will be a lot of teams trying to figure out ways to put personnel together to match that.”

The long-term challenge for the NBA is how to address the on-going grumblings about a lack of competitive balance. The Warriors and Cavs simply towered over every other team this season. Both teams breezed through the playoffs.

And it may stay that way for several seasons to come.

The league continues to try to use the leverage of the collective bargaining agreement — salary caps and incentives — to get superstar players such as Durant to stay with their teams.

But as many have pointed out, it’s not working. If a superstar can get about the same salary by switching to a much better team, there’s little incentive not to do so.

As Curry said after the win, “We accomplished something special. And we’re going to do it again.”