Getting overly excited about Mark Canha 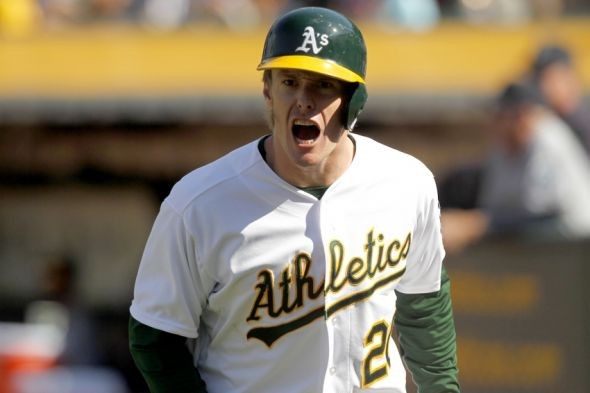 In Mark Canha’s 2015 rookie campaign, we fans got excited. On a team that could barely hit, couldn’t field, and employed a bullpen of unclutch potatoes, fans grasped onto whatever they could. That was Mark Canha.

The truth was, there were reasons to be skeptical of Canha. Reasons to be excited to be sure, but reasons to think his game needed work in order for him to succeed. That was fine – he was a rookie after all.

Then Canha lost nearly the entire 2016 campaign, a bummer for a guy in need of reps. He came back in early 2017, struggling mightily to almost no one’s surprise. Playing baseball is hard, playing big league ball after missing an entire season is a recipe for struggle.

After a short AAA stint, Mark Canha is back. He’s destroying the ball at a nearly unprecedented rate, and there’s reason to think he’s here to stay.

The phrase easy power has often been thrown around in regards to Mark Canha but truth is, it’s a little misleading. Easy power refers to the ability to get the ball out of the yard with little effort, and yes, Canha certainly possesses that ability.

But Mark Canha never put in little effort. He always swung from his rear, trying to put the ball over Mt. Davis and therefore struggling some to put the ball in play. His strikeout rate wasn’t exorbitant, but more contact is always better.

Since Canha has returned from AAA, his k-rate has plummeted. He’s striking out in just 16% of his at bats, down from 22% the rest of his career. Now 22% is not really bad, particularly for a guy who swings with such force and possesses so much power, but increasing contact can only be a good thing.

Even better is the fact that he’s not losing power to do so. Since he’s come back, Canha has crushed three monster dongs in just 31 plate appearances. He’s hitting line drives at a remarkable rate (29%), hitting balls hard at an even more remarkable rate (41.7%), and is pulling the ball more than ever before.

That’s from a tiny sample of 31 plate appearances. These numbers can change quickly but there are numbers that stabilize faster than others. Those typically have to do with plate discipline, and that’s where we have the best news – Canha looks like a new man. He’s swinging at the same number of pitches as he has for the rest of his career but he’s decreased the pitches he’s swinging at outside the zone (25.7% vs. 33.8%). He’s swinging way more at pitches in the zone (71.4% vs. 62.9%) too, another great sign. To the eyeball, he looks more comfortable at the plate and in total control of the zone.

So while his standard stats are a small sample, they’re supported by slightly more telling stats that are also in a small sample. A reason to get excited.

So why get overly excited

This is all from a tiny sample, one that you should definitely be wary of (he writes after trying to get you stoked about said sample). Ah, but swing changes. That’s why I’m bullish on Canha’s fine return.

You’re probably a bit tired of hearing about swing changes, but here we go down that avenue. Fortunately, this potential change we’re about to address is different than the normal swing up and for the fences one that’s swept across the league.

Back to Canha’s easy power. There’s no doubt Canha has got well above average power. It was called easy by many, but truth is, easy power isn’t really tenable when you swing with everything you have. Easy power refers to getting the ball out of the yard without max effort, something Canha is imminently capable of but something he hasn’t done. Until now, maybe.

Okay, the difference here is subtle. On the left is Canha the newfound destroyer, wrecking a fastball for a walkoff dinger. On the right is old Canha, smoking a donger in Spring Training.

New Canha (left) gets his foot down faster. He’s got more bend in his swing, making him a bit shorter to the ball. He was always a touch long before, part of his immense power. Now he’s quicker to the ball, sacrificing his force for a more controlled swing. I’ll let our resident hitting expert Jerry Brewer give his take:

Canha has more bend at the hips, and starts his bend earlier. He doesn’t have so far to go, which I will think help his consistency. I always thought that would be the thing for him.

And the best news is, in spite of giving up some of the force behind his previously gargantuan swing, he’s still got the power to succeed. In fact, with his now relinquished easy power of sorts and potentially better contact, he could hit even more long dongers. That’s good stuff!

Sample size. I can’t emphasize how much this is all coming from a small sample. While a swing change does mean we could be witnessing a whole new player, the small sample also means it could be nothing. Even if it is real, pitchers will counter adjust. There’s work to be done.

And then there’s playing time. Canha’s defense is still a question mark and while the A’s are shoehorning him into some ambitious spots, even they aren’t willing to play him in the outfield every day. That’s led to a positional jam, making it hard to get him in the lineup.

Yonder Alonso is now a stud at first, Ryon Healy is manning the DH spot a good portion of the time, and there’s just not an obvious opening for Canha’s bat. Baseball is a two way sport (don’t tell that to the 2016 A’s) and getting Canha at bats isn’t a simple proposition.

So don’t get too excited even though I just told you to get super excited. There are issues. But I’ll be damned if every Mark Canha at bat isn’t much watch baseball.