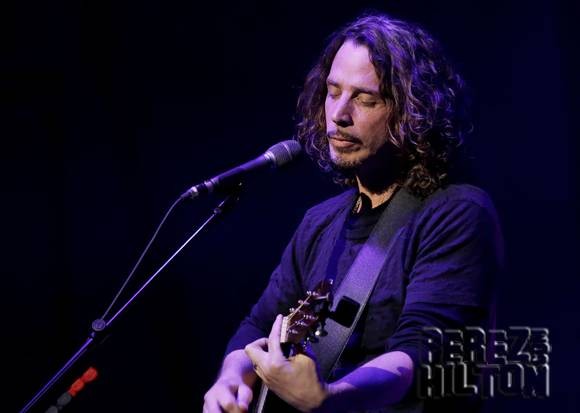 Chris Cornell was laid to rest in a private funeral Friday at the Hollywood Forever Cemetery, which was attended by the likes of Brad Pitt and Pharrell.

Scores of fans gathered outside to show their respects to the iconic rocker while music from his bands Soundgarden and Audioslave played from a portable speaker. A public viewing will follow the services at 3 p.m. PT.

In addition to Pitt, a longtime friend of Cornell, and Pharrell, the star-studded guest list also included Metallica rockers Lars Ulrich and James Hetfield and Dave Navarro of Jane’s Addiction.

Cornell’s wife of 13 years, Vicky and their two children, daughter Toni, 12, and son Christopher, 11, arrived dressed in black. The rocker is also survived by a 16-year-old daughter, Lilian, from a previous marriage.

Cornell, also known for his group Temple of the Dog, was found dead in his hotel room in Detroit last week, hours after he performed with his band Soundgarden in the city. He was 52. The preliminary report by the medical examiner’s office ruled that the cause of death was “suicide by hanging.” A full autopsy and toxicology test results are pending.

“He always was focused on his children and his wife,” he said. “Chris was the center of [Vicky’s] world and the world of her children. Everything revolved around Chris because he was such a great, fun, funny person.”

My big brother @chriscornell ??World needs to know what a loving father, husband, & friend you are – my heart is broken…Say hello 2 heaven pic.twitter.com/cHb3zFIptf

Following the funeral, his grave site was open to the public. The famous cemetery also contains the grave sites of fellow rockers Johnny Ramone and Dee Dee Ramone of The Ramones and Hollywood icons such as The Wizard of Oz star Judy Garland.

Days after his death, his wife shared an emotional open letter to the late rocker.

“You were the best father, husband and son-in-law. Your patience, empathy and love always showed through,” she wrote, adding, “We had the time of our lives in the last decade and I’m sorry, my sweet love, that I did not see what happened to you that night. I’m sorry you were alone, and I know that was not you, my sweet Christopher.”

“You were right when you said we are soulmates,” she continued. “It has been said that paths that have crossed will cross again, and I know that you will come find me, and I will be here waiting. I love you more than anyone has ever loved anyone in the history of loving and more than anyone ever will. Always and forever, Your Vicky.”