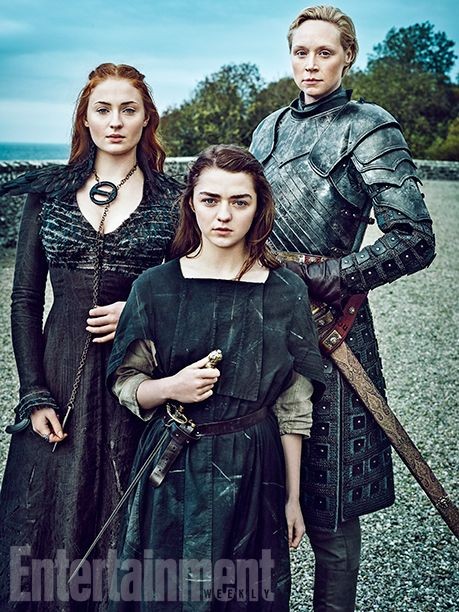 In the past sixth season of Game of Thrones, Jon and Sansa reunited for the first time since the debut season, when all four family members were separated, and he was made King of the North. Family patriarch Ned Stark (Sean Bean), matriarch Catelyn Stark (Michelle Fairley), their eldest son Robb Stark (Richard Madden) and youngest son Rickon Stark (Art Parkinson) have all been killed.

The actors talked to EW about their idea of a real Stark family reunion.

“All the Starks could have a meal that didn’t end in one of them getting murdered,” Wright said. “I think that would be nice.”

Harington, Williams, Turner and Wright appear together on one cover of EW‘s June 2-9, 2017 issue and also received individual covers. They are all dressed in leather and fur, the traditional garb of the North, while Jon, who is about to lead an alliance of armies to war, sports armor and a direwolf sigil. EW noted that when the cameras were off, Harington added some Crocs to complete his ensemble.

This also marks the first time Williams is seen wearing such attire. The actress, whose character is honing her skills as an assassin and avenger, told the magazine Arya has “found her calling in life and is very effective as what she does. She’s more learning about the political game this year, which she hasn’t had to play any role in before.”

Season seven of Game of Thrones, the second-to-last season for the HBO show, premieres on July 16. The first full-length trailer for it was released Wednesday.