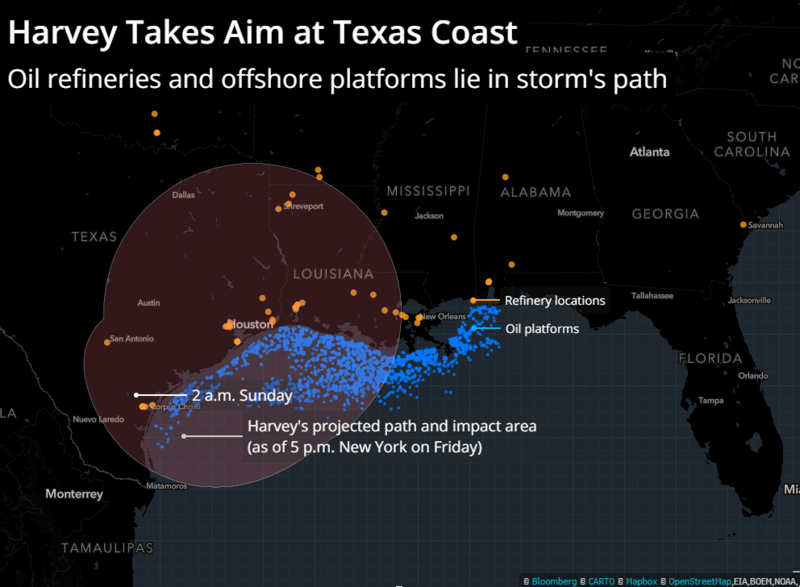 As devastating as the flooding has been for oil refiners in the U.S. Gulf Coast, surplus fuel inventories may help the industry withstand the worst storm to hit the country in more than a decade.

Deluges from Tropical Storm Harvey have turned Houston’s busiest highways into canals of standing water and displaced thousands of people and livestock. The floods also forced shutdowns across a regional energy hub that supplies fuel to millions of Americans from Oklahoma to Florida to New York. As much as 30 percent of U.S. fuel production may come off line temporarily, according to energy investment consultant Tudor, Pickering, Holt & Co.

But even as fuel prices surged and more heavy rain was forecast, gasoline stockpiles in the Gulf Coast are the highest for this time of year in two decades, just as demand is likely to drop, according to Bloomberg Intelligence. The Colonial Pipeline, which supplies about a quarter of the fuel consumed in the East Coast, said service has been interrupted at several locations near its origin point in Houston. Hebert and all other facilities east of Houston are operational, the company said in a statement on its website.

“I think everyone right now is playing it very conservatively,” said Andy Milton, a senior vice president of supply for Mansfield Oil, a Gainesville, Georgia-based fuel retailer. “I don’t see Colonial stopping. There’s still a lot of product to pump.”

U.S. gasoline inventories are just below the highest seasonally in at least 20 years, with enough for 24 days. In the Gulf Coast region, stockpiles reached 81.8 million barrels as of Aug. 18, 4.9 percent higher than a year earlier and 7 percent above the 20-year seasonal high, government data show.

To be sure, the closings of ports and refineries, as well as the inability of people to get to work because of all the flooding, could still limit supply from the region, which is home to the largest and most vital refineries in the country. Tudor, Pickering estimates the disruptions could last one or two weeks.

“Every Houston-area refinery will likely shut or at least significantly curb operating rates by tomorrow due to the catastrophic flooding, lack of personnel and crude delivery delays,” Tudor analysts said in an emailed research note Monday.

The increased risk to supplies helped send the price of wholesale gasoline delivered to New York Harbor to $1.6511 a gallon Monday, the highest in six months, data compiled by Bloomberg show. In Chicago, the fuel posted its biggest gain since March, up 5.7 percent to $1.7084 a gallon. On the New York Mercantile Exchange, gasoline futures rallied as much as 11.33 cents Monday to $1.7799 a gallon, a two-year high.

Still, gasoline traders said the rallies weren’t unexpected after a natural disaster, and may not signal actual shortages, at least for the near-term.

“If you saw gas basis jump a dollar a gallon, hey, yeah, there’s probably more underlying problems that you and I don’t know about,” Mansfield Oil’s Milton said by telephone. The 10-cent jump is “not nearly as dramatic as it could be.”

With Harvey still expected to drop heavy rains for the next few days, it’s too early to tell how disrupting the storm will be.

Late Sunday, the Explorer Pipeline shut a small pipeline that moves fuels to Dallas and surrounding areas due to high water. The impacts of this outage could be felt through Oklahoma City, but further north, the Midcontinent region and Chicago-area refiners have ample inventories.

U.S. refiners have been busy all summer boosting gasoline inventories. Week after week, government data showed fuel producers outdoing themselves. Last year, the country became a net exporter of gasoline. This means that while drivers on the East Coast may have nothing to worry about, motorists in Mexico might, said Robert Campbell, head of oil products research at Energy Aspects Ltd.

“The U.S. is such a major product exporter that a lot of the impact is going to be felt on the export market,” Campbell said by phone from Syracuse, New York. “The East Coast will be bidding against Mexico.”

Pending disastrous flooding in east Texas, the Northeast market will be safe because it has plenty of inventory and can import enough from Canada and Europe to keep gas stations replenished, said Andy Lipow, president of Lipow Oil Associates.

“If you’re a consumer in the New England, New York or Pennsylvania market, you have little to worry about,” Lipow said by telephone from New York.