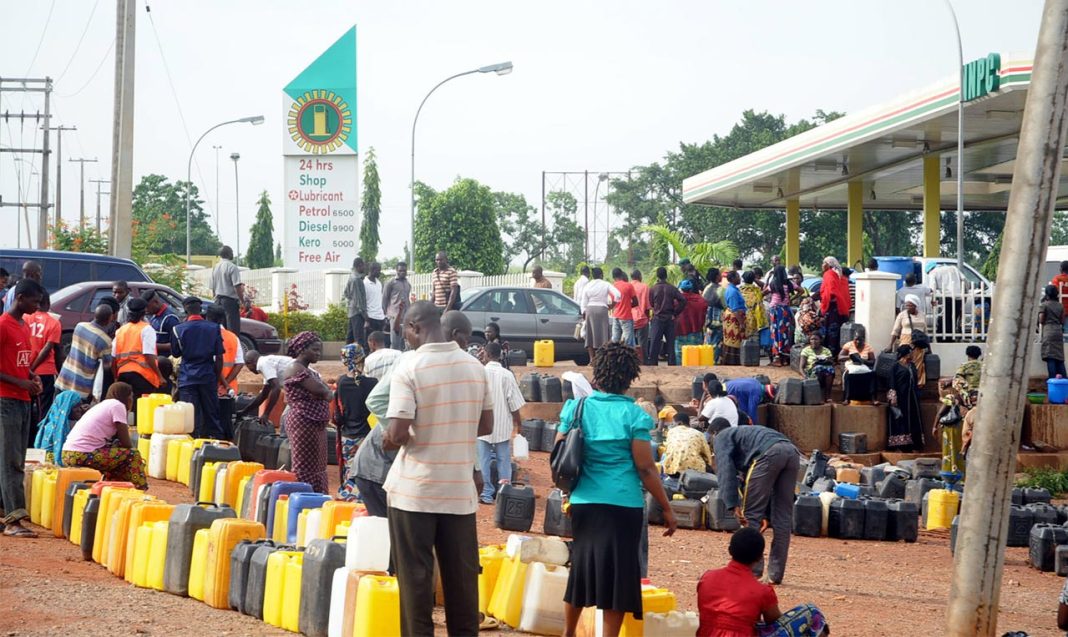 Nigerians have lamented as scarcity of Premium Motor Spirit, popularly known as petrol, resurfaced in some locations around Lagos State.

The Independent Petroleum Marketers Association of Nigeria (IPMAN) on Tuesday explained that the operating environment had become hostile to their businesses. He gave it as the reason for fuel scarcity in Lagos and other parts of the country.

The Lagos Zonal Chairman of IPMAN, Akin Akinrinade stated that it’s no longer feasible to sell petrol in Nigeria at the recommended price of N165 to a litre, adding that the landing cost of petrol was between N175 to N178 naira per litre.

Nigerians took to social media, calling out the All Progressives Congress, APC, over the fuel scarcity which seems to be recurring this year.

@Yeankar “We used to complain of fuel scarcity in December periods, we wanted a change. Now, we have fuel scarcity every 10 market days.”

@ClarkKent “This fuel scarcity is enough for the APC to lose the 2023 elections.”

@IshamMichaels “Fuel scarcity, traffic due to fuel queue, No bikes, getting late to work is almost inevitable.This country frustrates everyone.”

@ObalendeChimamanda “The last fuel scarcity wasn’t even up to 3 months ago, we’re being governed by animals and if you guys like don’t use your brains in 2023.”

@Illbliss “The fuel scarcity is back On the island. This country is a total mess. You wake up to new crap new challenges and hurdles EVery damn day. To the Nigerian Youth and entire citizenry, this will be your reality for the next 8 years if you fail to take keen interest in voting in 2023.”

@TailorMushroom “Ihope people understand that this fuel scarcity wouldn’t be a problem for most for us if we had regular 12hrs light. Imagine us having 24hrs light and we don’t need generators, only cars and bikes cannot use so much fuel daily.”

@Edemkemiel “What could be the cause of this scarcity? We are tired of this afflictions and pains you people are causing us the poor masses.”

@ O_nifesq “There was light all day yesterday, today that fuel scarcity started, they refused to bring the light. Nigeria is one big criminal enterprise, every part of it working hand in hand to inflict misery on it’s citizen.”

@Bukola “Talking about the current state of this country is a very depressing topic for me.Its why I avoid it and rarely tweet on it. Week in week out, there’s always some bad news.”